This morning, under urgency, Parliament enacted the Bail Amendment Act, which makes a number of changes to our bail laws.

It removes near automatic bail for those under 20 (limiting this to those under 18). And it removes near automatic bail for those under 18 who have previously been sentenced to prison. The most significant change relates to bail for those charged with murder: anyone charged with murder will have to prove they should get bail. This also applies to those charged with dealing in class A drugs. We will have to see whether this makes much difference. Bail is hard to get already if you are charged with murder, (or with dealing with class A drug crime) but it will likely mean that at least some people at the margins will be denied bail who would have got it under the old law, and some of these people will ultimately be acquitted. I'm not a fan of making bail tougher - I think the law should treat people as innocent until proven guilty, and sending innocent people to prison is obviously wrong - but that's not what this post is about.

The National Party is quite pleased with its new laws - understandable given that they fulfil a clear pre-election promise (.pdf) - and has even released the following ad, which various MPs have tweeted, or facebooked: 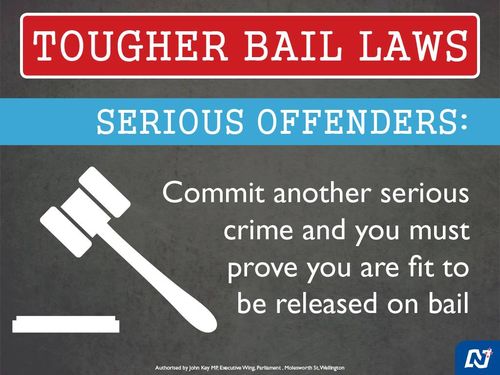 This describes the reverse onus provisions in the Bail Act. Usually, the police have an obligation to prove why someone shouldn't be bailed, but in certain circumstances, the onus of proof shifts (here's something I prepared earlier), and the person charged has to prove why they should get bail (a rule which will now apply to all people charged with murder).

But National's ad is a highly misleading way of describing the new bail law. In fact, it's a really a description of the current law. Except the current law is tougher than this. There is a list of "serious crimes" in section 10(2) of the Bail Act. No-one who has committed one of those serious offences, who is found to have committed another offence from that list is allowed bail at all.

Someone who has been convicted of one of those serious crimes, and who is charged with another of those serious crimes has to prove they should get bail. So if you have a conviction for robbery, or rape, or manslaughter (or any of the other serious offences on the list) and get out, and are then charged with another offence from that list (it doesn't have to be the same one), you have to prove you should get bail.

Except, wait, *that's already the law* as well. And it's been the law since the Bail Act was enacted in 2002.

The law change that National has made around this area is, in fact, much much smaller. It has kept the law that Labour enacted in 2002 word-for-word and simply added six extra offences to the list of serious offences (basically: underage sex, kidnapping, aggravated burglary, and assault with intent to rob). It's a change, but it doesn't really bear a resemblance to what is described in their ad, which has (ignoring the bit where they say 'commit') has been the law for quite some time.

There are plenty of changes that National could trumpet from their bail law changes - changes that would actually be laws for which they bear responsibility. And which, to be honest, will probably be popular. But they have instead chose to run advertising with a statement taking credit for the law as it was during the previous government. And that just seems wrong.