Yesterday news broke that a member of the New Zealand Army had been arrested and was in military custody. Details were sparse, but Stuff journalists Florence Kerr and Thomas Manch, and Newsroom’s Marc Daalder in particular seemed to be quick to print with details of the individual’s far right ties.

Later yesterday evening I noted an odd tweet, with Marc Daalder noting that the New Zealand Defence Force had told him that “the Commanding Officer of the soldier is currently in the process of making interim suppression orders, which will prohibit the publication of any information that may lead to the soldier’s identification”.

So I wondered, whether maybe there was an error in the statement, perhaps “seeking” was meant instead of “making”? But I was quickly shown the suppression order, and that was not the case. The soldier’s commanding officer had indeed issued a suppression order, at the request of the arrested soldier. 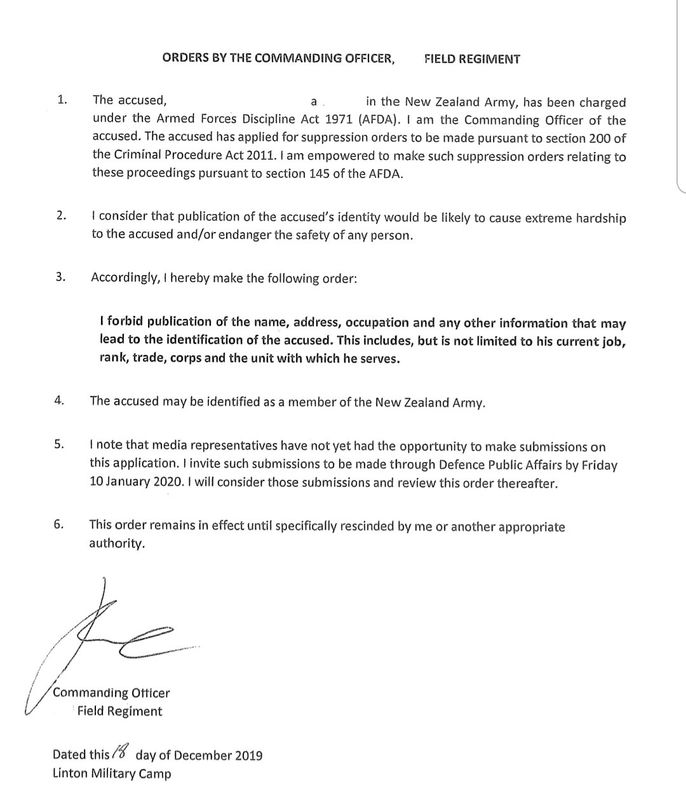 The legal argument that a commanding officer in these circumstances has suppression powers isn’t ridiculous, but it’s also not nearly as clear cut as you would hope, and on balance I tend to the view that the legislation does not provide it.

I do not claim to be an expert on armed forces law, but I have a general sense of how it works, and the ability to read legislation faster than most people. The argument arises from the fact that at low levels, and at the initial stages of dealing with higher-level military offence, a person’s commanding officer can act as a “disciplinary officer”. There are limits – they won’t deal with some charges, but they can accept guilty pleas, determine charges, and impose punishments within certain limits (if they feel greater punishment might be required than they could impose, they can refer a case to Court Martial). It is a summary process, still with procedural safeguards, but taking account of the more disciplined nature of military service (if your knowledge of military law is limited to what you learned watching JAG in the 90s and 2000s, it’s New Zealand’s equivalent of the US military’s non-judicial punishment, in the US Navy called “Captain’s mast” or “Admiral’s mast”).

This is the stage that the proceeding against the arrested soldier is at. His commanding officer is acting as a disciplinary officer at the initial stages. We do not know the nature of the charge, and it is possible the accused may request, or be sent to a Court Martial, or that his commanding officer may dismiss the charge as baseless.

It is at a stage that, if this was a charge in the District Court, that a judge could impose name suppression. The question is whether a disciplinary officer can.

Disciplinary proceedings in the Defence Force are dealt with under the Armed Forces Discipline Act. It does not directly contain a suppression power, but instead section 145 provides that the suppression powers in the Criminal Procedure Act apply “to the extent that it is applicable and with all necessary modifications, to proceedings” under the AFDA.

However, the suppression powers in the Criminal Procedure Act only give *Courts* the power to impose suppression orders. This would mean a Court Martial would have the power under section 145 to impose publication restrictions on newspapers. The question is whether it is necessary for the word “court” in the Criminal Procedure Act to be read as including disciplinary officers.

It is not clear it should. A disciplinary officer is not a court. A disciplinary officer cannot enter a conviction. If they find someone guilty, they impose a punishment, not a sentence. And unlike orders in the civil courts, there appears to be no way that a name suppression order could be appealed by a concerned publication (only the sub-part of the Criminal Procedure Act dealing with suppression is ported over, the sub-part dealing with name suppression appeals is not).

Most importantly, we get back to the fact the Criminal Procedure Act refers to courts. A Court Martial is a court. The legal question is whether it is “necessary” to conclude a commanding officer acting as a disciplinary officer should be treated as a court. And I do not see that it is necessary. Parliament’s use of the word court should be given meaning. When applying a power given by Parliament to courts, we should be careful before concluding that it can be exercised by things that are not courts. The section has sufficient meaning in applying to situations when courts are exercising powers in proceedings under the AFDA. There may be circumstances in which it would be desirable for there to be name suppression of someone facing a non-judicial punishment, but it is not “necessary” for the law to modified this way to give it effect, and Parliament only imposed reading in modifications to the Criminal Procedure Act that are necessary.

The AFDA is not the only law with a deeming provision like this one, sometimes it simply allows something to happen legally without having to be written down in detail twice, but this shorthand approach presents problems in other areas: extradition and the law around prosecuting people with mental impairments are examples that have come up in my legal career, although I am sure there are others.

But as difficult as those laws are in practice, they are of a different character: they are primarily procedural. Suppression laws have a procedural element, but they are principally criminal laws: they set in place orders that, if breached, can be prosecuted as crimes. If Parliament wants commanding officers acting as disciplinary officers exercising what are sometimes court functions to be able to make orders prohibiting civilian newspapers from publishing things, I would expect them to use much clearer language. I hope it would agree.