I am not one to gossip. If I were, all you faithful readers of Woman's Day would have been in the know fully three months sooner: Lana Coc-Kroft is expecting! Old news now, though. Karren was waiting for the receptionist to look up from her desk and say: The doctor will scan you now, when there was a minor flurry. Doors opened and closed swiftly. A tall blonde figure strode quickly through the clinic. You can't even get your celebrity foetus scanned without people noticing.

The appointment was in Ponsonby, just before midday, so we met for lunch in a cafe, and Karren arrived bearing the first image of our child.

I have no idea what the quality of the images is like these days, but I watch CSI and roll down other people's streets on Google Earth when there's nothing better to do, so I would expect plenty. But all the way back in 1998, we had to squint. What we appeared to have spawned, according to the grainy black and white image, was a small fossil.

Open up your textbooks. Look at the fossil pictures. They're all the same. One spinal arc after another. A row of cylinders rising and falling in size, a ragged string of little life preservers.

This is my first and enduring image of our daughter. A little ridge of spine. Just occasionally she will lean forward and the little crest of her spine will show itself again. I will think: "I remember you."

So much of a parent's initial experiences are surprisingly alien. You pick up the image expecting...what? A tiny fist? A resemblance to your own chiselled good looks? You expect nothing, really, but all the same, this little arch of a spine is so tenuous. It looks less, or other, than human. This changes. The tiny fist appears in a later scan. In a still later one, the doctor asks us: "do you want to know?" We smile great big goofy delighted smiles. It's a girl. It's a real human.

In the delivery room, our new-born baby is slowly swimming her arms in mid-air. Her mouth moves, but she makes no noise. Her eyes are pressed tightly shut. (Against the light?) I don't notice the spine. I don't register whether it still seems alien. I am looking at the nose which seems all too familiar. I am thinking you poor little bugger. The resemblance mercifully passes; she is lovely.

A friend gave birth while we were away. She had a lovely girl and she has recounted the experience in the same wry way she recounts the rest of her life. Highly recommended new year reading.

The specialist arrives maybe about 7 days later, maybe half an hour? He has some drugs on him, but they don't really touch the sides.

This holiday we spent five days rolling down a 160-kilometre petanque course in Central Otago. Your wheels make a soft crunching sound on the gravel. It could be the surf at night. Central Otago is more or less as depicted by Grahame Sydney but greener for the irrigation and the recent rain. After five minutes on the rail trail, you realise you like it so very much because you do not have to look over your shoulder, ever, for vehicles.

And there in front of you, is your nine year old, and there is that little fossil relic. 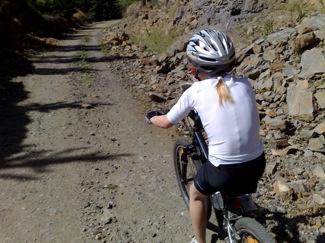 Life comes and gathers around the tiny spine, whether you are ready or not, and it proceeds with or without your help. You can be attentive, loving, indolent, indulgent, you can be a train wreck; whatever you do or omit to do, the spine will gather an entire living human around itself. It may become your entire life, it may remain alien.

We only once felt as though we were outsiders. The pubs and cafes and lodges open their doors to the visitors on their bikes. You are made enormously welcome. At the very least you will have a choice of rib-eye steak or blue cod and chips. There was just one bar where we pushed open the swing doors and the piano-playin' stopped. A raspberry and lemonade for the girl, chardonnay for my wife and a scotch on the rocks, thanks. Three times I could have said "handle of Speights" and three times I came up empty. We took our Auckland drinks outside to the garden bar. Can't complain about the food, though. The kitchen has probably been doing the same good meals for a hundred years. I chose the Mixed Grill. It would be fully twenty years since I last had one, what with all the chardonnay. The Mixed Grill is not your Dad's one, though, not even among the Southern Men. Bean sprouts! Lettuce! If you took them out, there would be room for a second egg.

On we rode, through sun and blue skies, blue skies and sun. Also a nor'wester that nearly stopped Mary-Margaret in her tracks, and cold rain one morning that numbed the hands of my daughter and me. The determined little girl with the strong spine kept pushing. We were so proud of her.

In the Otago Museum, she was thrilled to

discover stone remnants of the giant snake she had described to us - it would stretch from our house to outside Ella Brownlees' gate, Dad - on display. It was in fossil form. There was a vast eye socket and an enormous spine. It was all that was left.