When I had the opportunity some years ago to write the 'Culture' chapter for the Lonely Planet Guide to New Zealand, I explained Waitangi Day as our "annual festival of unanswered questions".

I think that was a reasonable description. And that among the great questions of what kind of nation, or nations, we will be is the smaller, more practical question of what do we actually do on our national holiday?

For some revolting racists, Waitangi Day seems to be a cue to get on social media and make revolting, racist comments. I know this because many of these comments were drawn to my attention by decent people who wanted the rest of us to know exactly what revolting racists some New Zealanders are.

One of my Twitter friends even posted a clever and stylish Waitangi Day Racist Bingo Card: 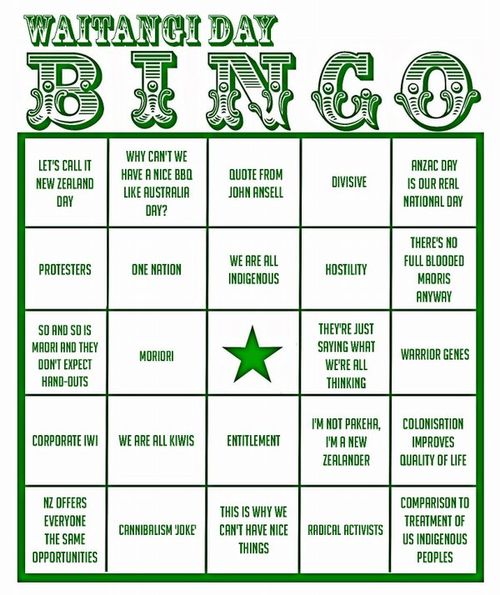 Nifty. But not in the view of one of her friends who declared himself "not really a fan of cheapening indigenous struggle via internet memes." Okay, then.

Kim Dotcom, who will now clearly incorporate himself in all national events, went with this: 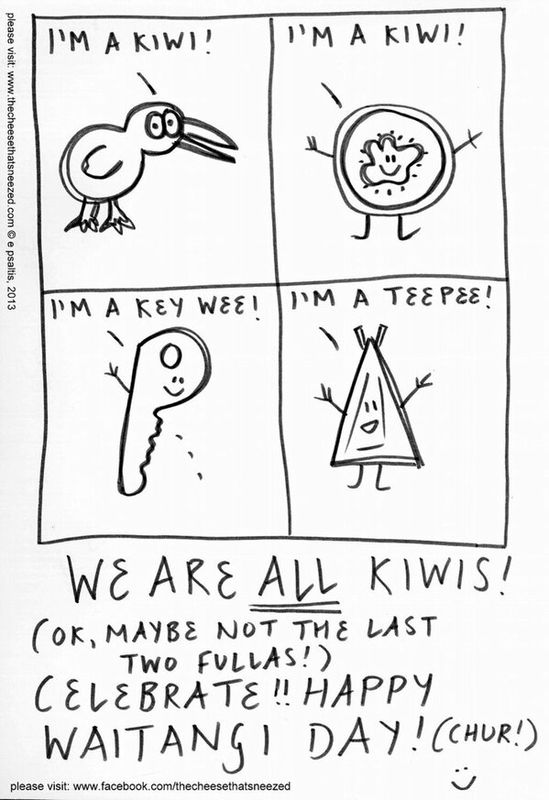 History has woven us together. Waitangi Day is as much about communication as it is commemoration. We are the basket that holds the future.

Following the lead of the Prime Minister, who slammed headline-seeking activists "unable to see the world through any lens other than Maori disadvantage", Labour leader David Shearer declared his wish to make Waitangi Day more of a day of celebration and less "a day of jostling and protest". In response, Stephen Judd wrote this:

It surprises me that as a politician you don’t seem to get that politics is not merely an unpleasantness that ruins what would otherwise be a happy consensus. It is the process by which groups with competing interests work on the never-finished balance between them. Asking people to put that aside is to ask them to accept whatever balance currently prevails. In the New Zealand we live in now, trying to depoliticise Waitangi Day is itself a deeply political act.

Stephen was not alone in urging others to take the opportunity to contemplate the history we share here, and the wrongs yet to be righted, the balances yet to be struck. On the one hand, this is sound advice -- on the other, who really does this? Does anyone mark the day by sitting down and discussing the Treaty with friends and family? I'm not sure that many of us know what what to do on Waitangi Day.

It gets more confusing when the US President and Secretary of State start congratulating us:

"As New Zealanders around the world come together to celebrate, I wish you a happy Waitangi Day, and a prosperous and successful year."

Do we respond by thanking our friends for their kind thoughts but explaining that it's a bit too soon for congratulations? I imagine that would be confusing for the Americans.

On Morning Report today, Willie Jackson blamed the news media for focusing on the stupid scrap over which kuia would carry out the tradition invented by Titewhai Harawira 12 years ago and accompany the Prime Minister onto Te Tii marae -- when in fact, he said, nearly all the other 30,000 gathered at Waitangi were busy "celebrating" the day. And he's right. Even for those who gather at Waitangi, the actual jousting and political measuring-up is a niche activity. Not a family one -- unless your family name is Harawira, I guess.

In Auckland yesterday, there were three big outdoor celebrations -- the long-running festival at Barry Curtis Park in Manukau, a new one at Henderson Park and a paid show at Bastion Point. Sale St pub touted a Waitangi Day beer festival where (for fuck's sake) "grass skirts" were appropriate "even for the men". Or there was this:

In honour of New Zealand's Waitangi Day! check out our seed of the day KC Brains KC 42cannabis-seeds.co.uk/kcbrains/kc-42…

Me, I put down the Twitter and went for a ride into the CBD, where people seemed to be wandering aimlessly, and then along the waterfront and up through Ponsonby where, as ever, people were taking lunch and coffee. On the way back, I picked up a piece of free-range pork scotch, which I marinated, barbecued and served to my family with cubed potato and pear. That felt good. I think I did the right things.

So what did you all do yesterday? I'm genuinely interested.

As they say on the television, "Tell Us What You Think Via Social Media ... "