One of the things that gives me pause before setting off on my bike from Point Chevalier to anywhere in the direction of the city is the prospect of navigating the many traffic hazards in the area either side of the St Lukes interchange on Great North Road.

So I was interested and potentially pleased when I saw that Auckland Transport has put out for consultation a shared-path upgrade that is intended to ease the passage of walkers and cyclists through this difficult area. And then I was puzzled when I saw this drawing: 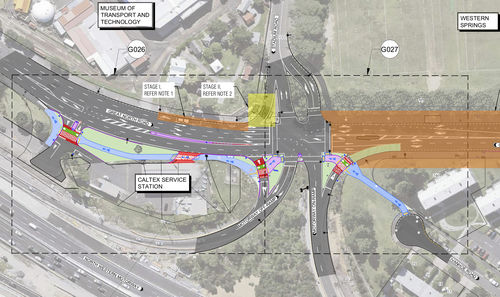 The green and blue bits are the proposed works. And the orange area to the right signifies shared paths that have allegedly been completed as part of the remodelling of the Bullock Track intersection. Someone put in a cycleway and didn't tell me? I thought I'd better go down for a look.

Waddya know!? There is, officially, now a shared path. Here's the east end, where cyclists allegedly join the path. Note the highly visible sign announcing this boon, and the thrilling metre-wide gap between the edge of the bus shelter and the road. Imagine the fun to be had avoiding people silly enough to stand in front of the shelter! 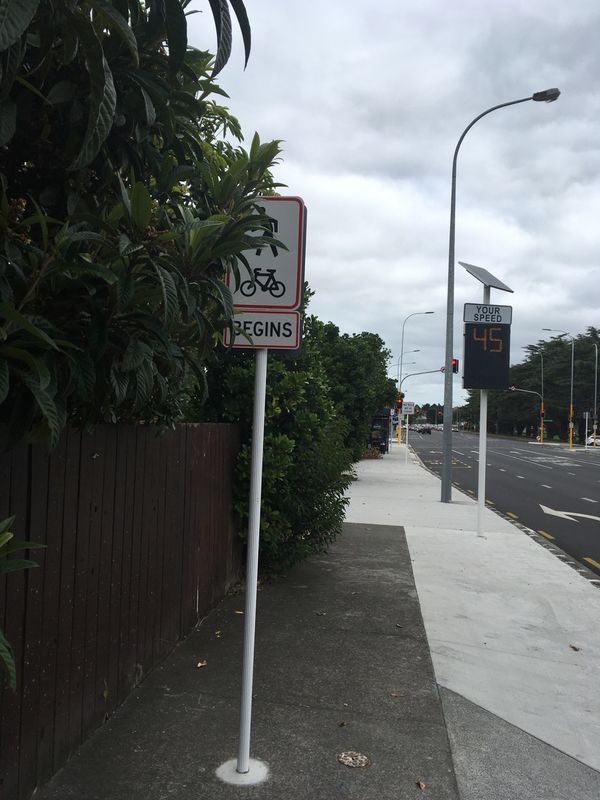 Turns out, this is apparently intended as a bi-directional path, so here we are facing the other way, uphill towards town. Cyclists need only cross three and a half lanes of uncontrolled traffic to get to the other side and carry on with their citybound journey. 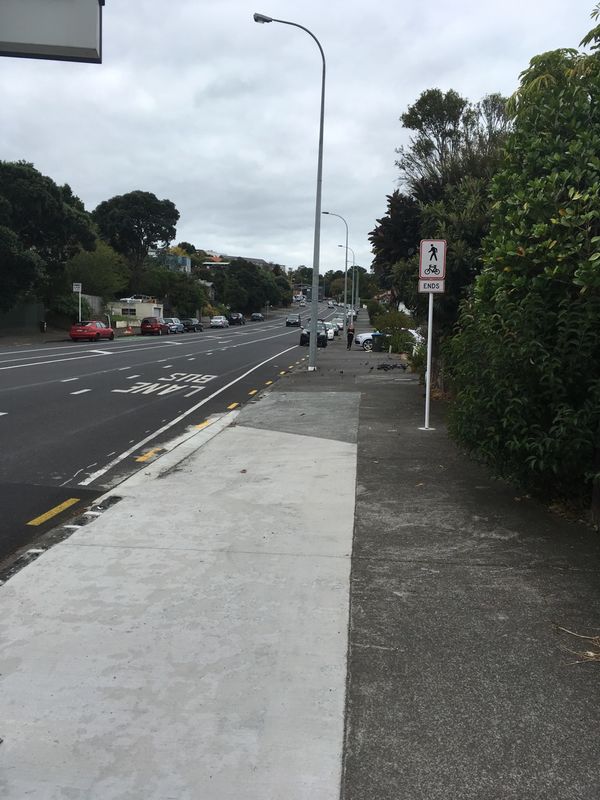 For those heading westwards and home, there's a compulsory dismount after 30 metres. Although AT has put in a strip of that yellow tread material, there's no bike signal at the crossing. For that matter, there's no pedestrian signal either. 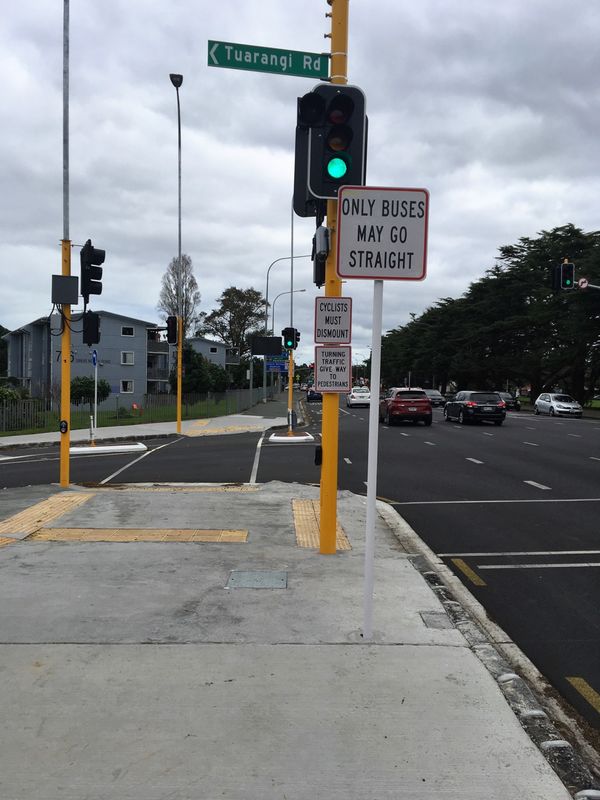 And then we're onto this. If you study this picture carefully, you may be able to see the small sign in the distance that identifies this stretch as a shared path. 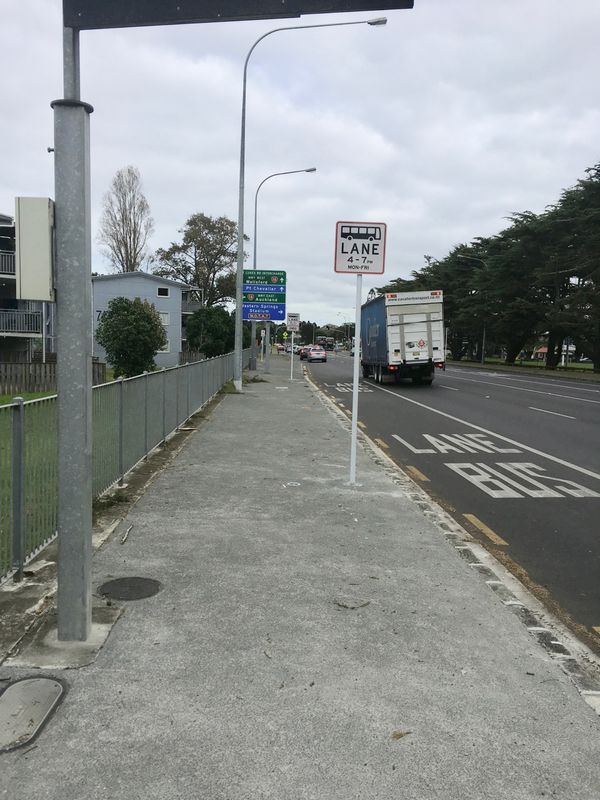 And no, you wouldn't want to be navigating this bit if there were any pedestrians around. Or even if there weren't.

Then we're on to the first part of the proposed new upgrade, which is a widening of this handy little shortcut through to Ivanhoe Road (and thence the delights of Morningside, Kingsland the northwestern cycle) – and possibly the only unalloyed Really Good Thing about the whole development. Small wins, etc. 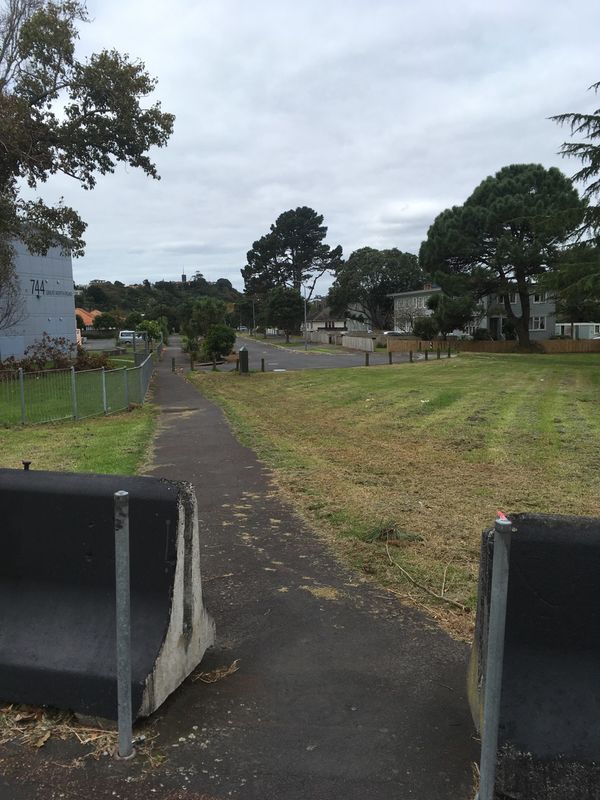 Well, okay, this bit too I guess. This is the site of the proposed new path past the Caltex station, which, promisingly, some riders already use. 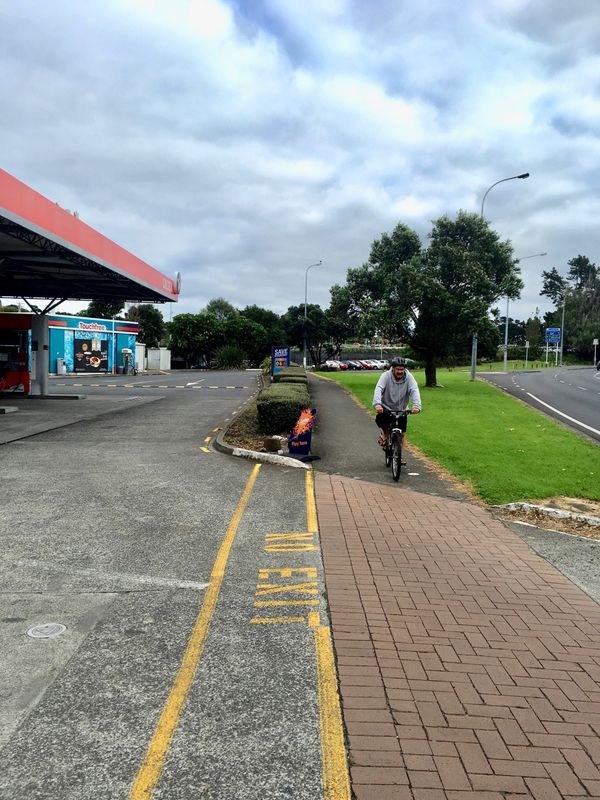 I presume they are riders coming off the interchange bridge over the motorway, because this comes next. Turns out this is already a shared-use path too! Again, if you look carefully you can see a small sign saying so. 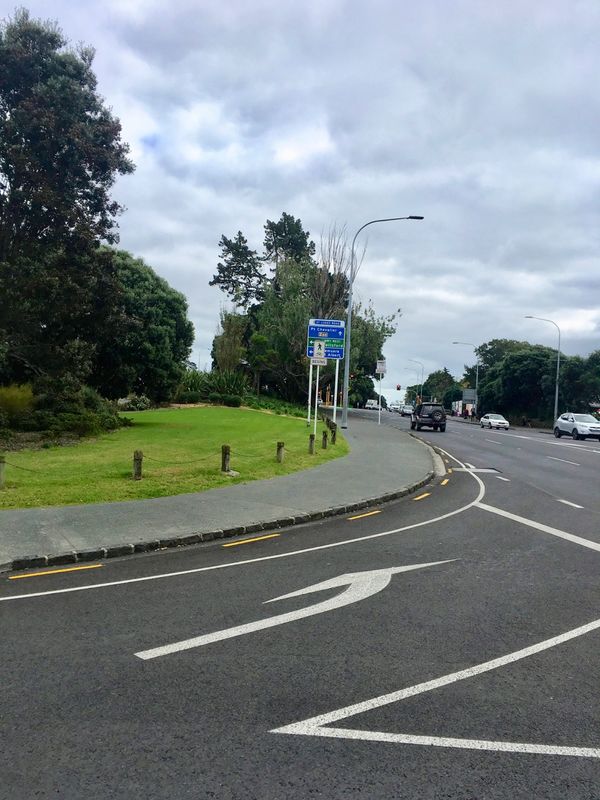 I guess this kinda works if you're planning on following the path round to the left and over the bridge. If you're commuting home to the Chev and points west, you need to prepare to get off your bike and wheel it across three separate crossings, then get back on the road where you can. 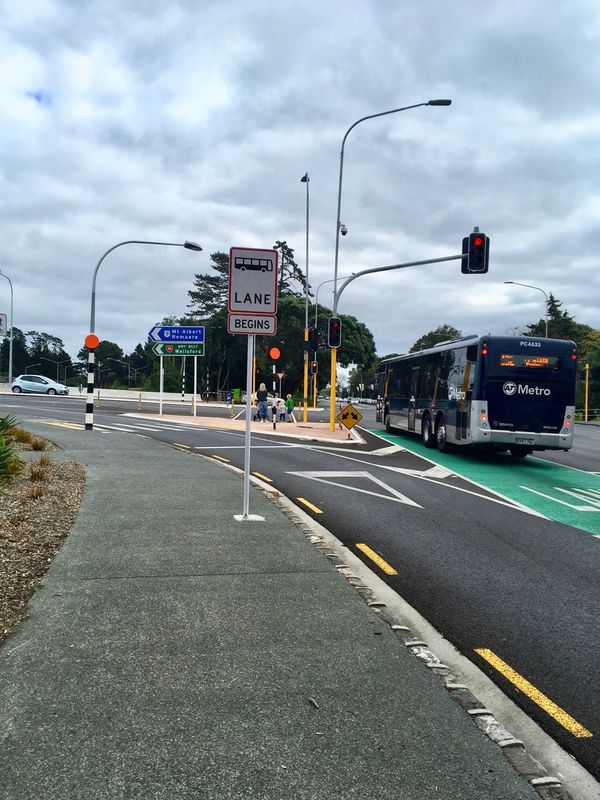 On the road, this stretch is quite a challenge – if you're proceeding on through the intersection, you need to battle your way across traffic to the through lane. If there are no buses, I'll generally get to the lights and wait in the bus lane (there were four buses coming through when I was there today). But, tricky as it is, I'd still take the road here.

But wait, there's more. The drawing above also suggests that the other side of the road, alongside the Western Springs Park playing fields, is also a shared path. I got there and figured I must have misread the legend, because there's no way this is a shared path. No signs, no marking, it's just a bumpy old unimproved footpath. But I missed something: can you see what it is? 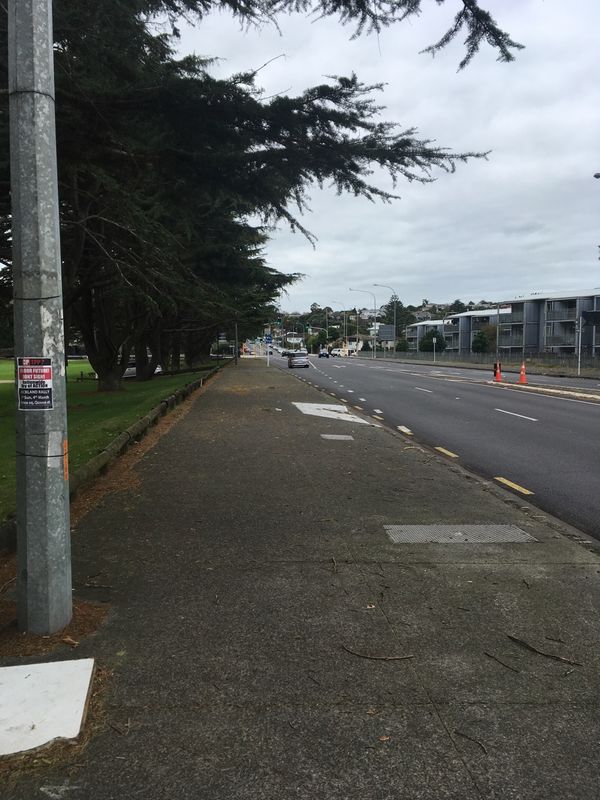 Yes, that little white concrete bit is a ramp for cyclists. In a way, it's in the right place, in that it's where the dedicated left-turn lane starts – and where anyone on a bike starts getting sandwiched by cars. But ... really?

Regular riders tell me the path officially ends just the other side of the Bullock Track intersection, at the front of a bus stop. So if you and a bus happen to be there at the same, you won't be just nipping out on to the road.

Now, the raised tables on the south side should slow down turning cars and make things a bit safer for anyone trying to cross the road at those points. (I'm still considering whether "Variable Massage" is a good thing, tbh.) 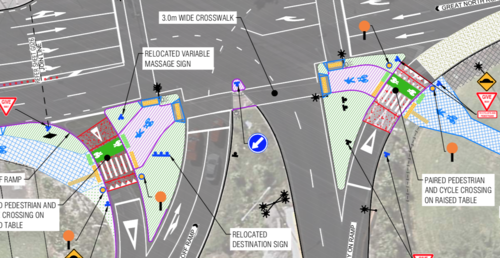 Ditto the one here by the Caltex (and yes, I too am still trying to figure out how that was ever part of Western Springs Road). 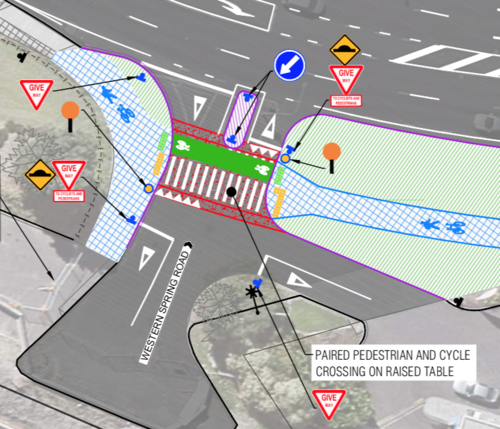 Now, I realise that this is a busy area – the only local route to the Waterview tunnel is the St Lukes interchange – and road space is highly contested. The new works will certainly help pedestrians en route to Western Springs stadium and park, and will possibly improve things a bit for slow local riders.

But paths as half-arsed and poorly considered as those apparently completed in "Stage 1" will not be used by most people actually going places by bike. They frankly might as well not be there. Which is a bit of a worry, given that the other route into town, the northwestern cycleway on the other side of the motorway is nearing capacity as a rush-hour shared path.

It bugs me that an alternative route from my suburb to the city – the proposed Waitemata safe cycle route – is currently delayed indefinitely by some idiots in Westmere who have blathered so loudly about "unsafe" bike lanes that Auckland Transport has taken fright and called a halt. Which means that I and everyone else who rides past Western Springs to the city and back is expected to use this shambles.

And, finally, this pointer to the feedback form on the project page for the proposed works just really fucking does my head in:

To be clear: there is exactly one property owner potentially affected by this project: the owner of the Caltex service station it passes. Has AT become so spooked by the Garnet Road lunacy that it has to explicitly orient its feedback process to unhappy residents when there actually aren't any?

UPDATE: It has been proposed to me that the new plan for raised tables (with riders not required to dismount) across the top of motorway slip-lanes is a welcome first. And yes, on reflection, that is right and true, so bravo. I guess I'm complaining most about the parts that are allegedly completed.

PS: Some good news to finish. The boffins at Bike Auckland have proposed this well thought-through solution to congestion at the key pinch-point of the northwestern cycleway. It would help improve the safety of both walkers and riders. If funding can't be found for it I frankly don't know what the hell's going on.