'No Brown in Town' reads the headline of today's New Zealand Herald front page lead. The online heading, somewhat more usefully is, 'Festival to Brown: stay away'. It begins thus:

Embattled Auckland Mayor Len Brown has been told to stay away from a community military event this weekend for fear he will attract protesters and take the shine off the promotion.

It follows booing when the mayor opened the NRL Auckland Nines at Eden Park on Saturday and comes ahead of a planned march up Queen St calling on him to stand down. 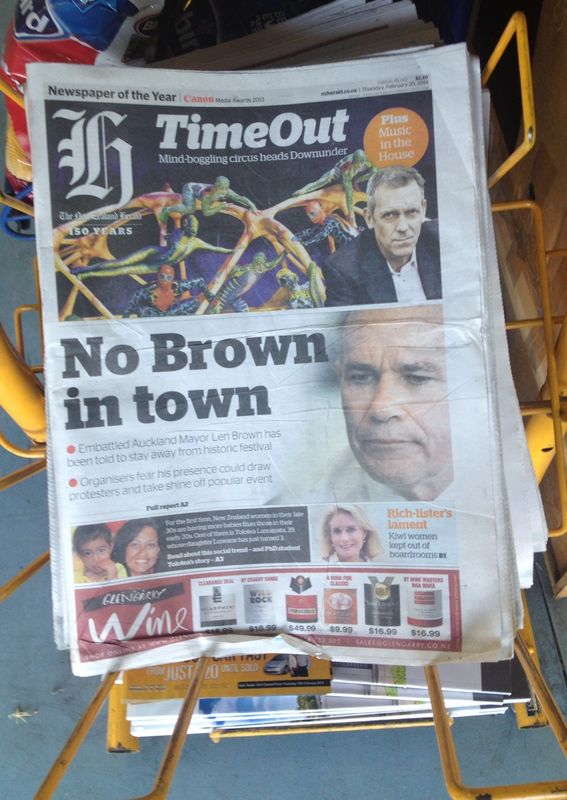 We have to get five paragraphs in before discovering that the president of the event in question, the Howick Military Tattoo, is Sharon Stewart, one of five marginalised Auckland councillors basically fixated on the mayor. Having failed to convince her council colleagues, she has used her influence at the tattoo to take yet another shot at him.

Well, probably. The story isn't very clear on the context and there's no indication of whether anyone else involved with the tattoo approves of Stewart's warning, or is happy with the event being used as part of what might look like a vendetta on her part. Although the front page subhead refers to "organisers", there's no indication that anyone other than Stewart has been spoken to.

I'm told Stewart has "complete control" over the event, but it might be interesting to know what some other participating grown-ups think. You'd think these things would be relevant in a front page lead story.

The mayor's office was contacted and notes that Brown was not planning to attend the event in any official capacity, but simply to go along with his family, as he apparently has done for years. In the circumstances, one would think Bernard Orsman would have tried a little harder for a view from someone who isn't negatively obsessed with Brown.

The story also notes that the speaking lineup for Saturday's Len Brown Stand Down March was announced yesterday, in this press release.

Of the seven speakers, three -- Will Ryan, Vinny Eastwood and Penny Bright -- are pretty much full-spectrum 9/11 Truthers, chemtrail enthusiasts and anti-vaxers. Ryan, who can be seen here berating Nick Smith on the ETS and climate change, was also involved in organising presentations by leading 9/11 Truther Richard Gage and doesn't trust vaccines, the banking systen or "staged terror attacks".

Another, Russell Malcolm, is subject to an order preventing him from contacting Auckland Councillors. He believes that Prime Minister John Key was "woken up to personally dictate" his bail conditions and that he has information that "could get me killed".

Of the others, Stephen Berry, who came a distant third in the mayoral election on the Affordable Auckland ticket and can be found on Lindsay Perigo's 'Solo Passion' website. And David Thornton, founder of No More Rates, and Makelesi Ngata, spokesperson for the Tamaki Housing Group, are both unsuccessful local board candidates but do not appear to have any unorthdox ideas about science or apparently paranoid beliefs.

These are the people who have been following Brown around to his public engagements this year. They are emphatically entitled to their protest, and I'm mindful that 12 years ago I  joined a march in protest at the abysmal behaviour of then mayor John Banks and his allies (anyone who thought the mixed reception Brown received from the NRL Nines crowd on Saturday was rugged may have forgotten the extraordinary jeering Banks endured from Warriors fans in 2002). I do feel fairly confident in predicting that Saturday's march will be a fraction of the size of that in 2002.

And the New Zealand Herald is also entitled to take a stand against the current mayor, to the extent of calling for his resignation. But in not having come close to securing that resignation, the paper has placed itself in an unfortunate position. Does it move on, or continue to contrive petty stories like today's lead?

Let's be honest here: although most Aucklanders think less of the mayor  after the revelations of the last few months, the anti-Brown campaign isn't a popular movement. It's run by a small group of people who are perennially marginalised and in some cases outright delusional. And the Herald isn't exactly doing itself any favours by getting behind them.

Because, really: was this actually today's most important news story?