The debate began in the smallest of ways: "There may be a case for varying inward migration and/or work permits," read a line buried in Labour's monetary policy announcement a month ago. It was peripheral to the substance of the policy, which was to add KiwiSaver savings rates to the Reserve Bank's anti-inflation toolbox, thereby taking some of the pressure off mortgage rates and the raging dollar.

The story was some good spotting by 3 News' Brook Sabin, but hardly the "political bombshell" that his report suggested. Governments tweak immigration targets fairly regularly, and generally uncontroversially, although sometimes the results are unpredictable. Labour benefited from the positive economic effects of immigration in its three terms, but set a gross immigration target of 45,000 in 2004-2005 that, for various reasons, saw a net population decline. (Even then, Labour's "lax" immigration policy was castigated in this extraordinary 2005 statement from then-National Party leader Don Brash.)

That was, of course, an election year. And if you need another example of how immigration plays in election years, it came in 3 News' report last night of its Reid Research poll question "Should immigration numbers be restricted?": 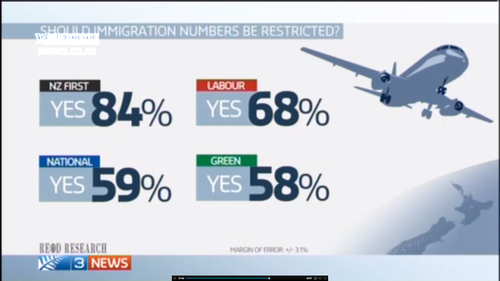 Given its showing in other areas of public opinion, the temptation for Labour to run with this is clearly considerable -- and the potential perils of doing so equally obvious.

But when net migration is at a decade high of 34,000 on a gross inflow of 71,000 in the past year and some economists are projecting that it could go as high as 45,000, it would be strange to refuse to even reflect on immigration policy settings.

David Farrar has laid out the numbers and contends that most of the drivers are things we either can't do anything about or shouldn't want to -- New Zealanders staying home, New Zealanders returning, work permits, foreign students, Australians exercising their right to live here. The increase in other migrants represents a relatively small proportion of the result.

Which is fine so far as it goes. But the most recent Migration Trends report from the Department of Labour, for the six months till December last year, shows residency approvals up 10% on the same period a year before and it appears the trend is accelerating. A "long downward trend" in the "Essential Skills" work visa category has turned around, in part because of the needs of the Christchurch rebuild, but more workers in that category still go to Auckland than any other region. Foreign student numbers are up too. Historically, holders of work and student visas have a good path to permanent residency -- which isn't a bad thing.

That adds up to a lot more people living here and needing housing and services. Even if you believe that diversity has been good for us (as I do), you can't simply ignore the question of what to do about that. The problem is particularly acute in Auckland, given the housing shortage and apparently inexorable trends in internal migration. Even within Auckland, the questions are much the same: the population of my central Auckland suburb is projected to grow sharply in coming years and it's unclear where the kids are going to go to school. You can't just wave this stuff away.

It should be possible to discuss migration trends without appealing to the worst nature of parts of the electorate and without reflexively being accused of xenophobia the moment the topic is aired. This is a very, very fine line for Labour to tread. But it's also incumbent on its opponents to address the underlying issues. I just don't think the magic wand of the market is going to be the whole answer.