As a friend of mine observed yesterday, backdowns are gold for political journalists. The stories write themselves: the government (or indeed, any other party) got it wrong and is now crawling back and hoping no one notices. Therefore: BUSTED!

And yet, he said, John Key's announcement yesterday that the government would finally fall into line with Auckland Council's timeline for construction of the City Rail Link, "a demonstrable backdown", was being sold in the headlines as "a kickstart".

In truth, only the Herald used the k-word: 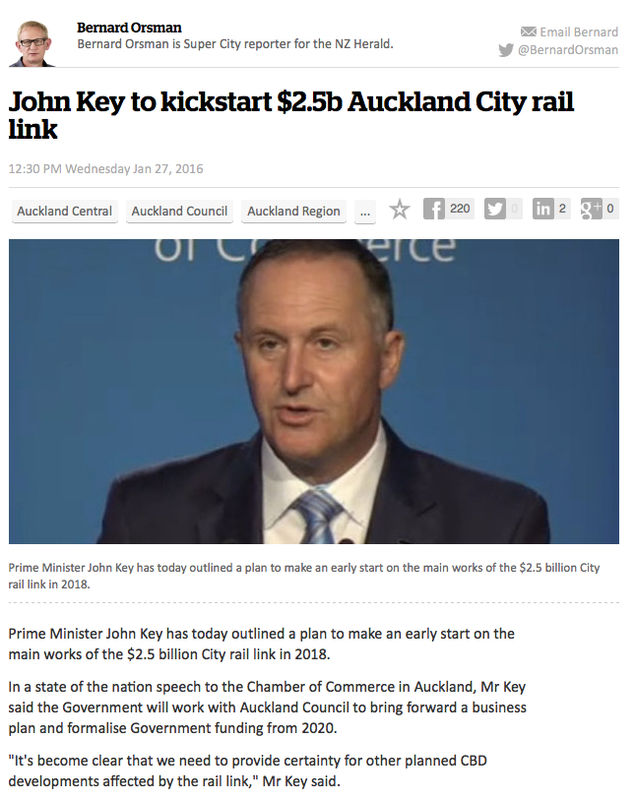 And that was presumably because Bernard Orsman would spontaneously combust were he to write a report that offered even a hint of credit to Len Brown, who won his long battle to start sooner rather than later on this crucial work of transport infrastructure.

On the other hand, there were few news organisations actively mocking the government's belated reversion to the plan the council has proposed for the past five years (note that rather than bringing forward its share of funding for the CRL, the government actually erased its self-imposed delay on that funding). This isn't the first time Key's government has been offered such a kindness, and it won't be the last. In a way, it's not even the interesting part.

In yesterday's speech, Key said this:

It’s become clear that we need to provide certainty for other planned CBD developments affected by the Rail Link.

This means we see merit in starting the project sooner.

The translation of this is: "Even our Auckland business base is asking what the hell we're doing." The fact that the speech was made to the Chamber of Commerce was no accident. The realities of other CBD developments, principally but not only the demolition and rebuilding of Downtown Mall, meant the delay imposed by the government would increase both the cost and disruption caused by the project. This isn't even news.

Yesterday's announcement might be seen as less of a sudden backdown than the final stage of a long retreat from the remarkable hostility goverment ministers showed to the CRL. In 2012, the Dominion Post quoted then-Transport minister Gerry Brownlee on the council's case:

Transport Minister Gerry Brownlee has slammed Auckland Council's study on traffic solutions for the city and the City Rail Link saying the council "struggles to make the case".

The City Centre Future Access Study, released yesterday, warned of significant delays and congestion in Auckland within 10 years if the City Rail Link was not built.

The study followed a request 18 months ago from former Transport Minister Steven Joyce for Mayor Len Brown to develop a robust and achievable transport programme.

The study was completed in consultation with central government officials but despite that Brownlee said the tunnel was not viable.

He said the report, while useful, fell some way short of convincing the Government it should provide financial support to any fast tracking of the proposed City Rail Link.

"The Government is not discounting the potential for enhanced rail services to improve central Auckland congestion in the future, be it along the proposed City Rail Link route or another service.

"But this valiant attempt to make it stack up struggles to make the case."

Brownlee's actual press release was even more hostile. And yet, here we we are. We can only be thankful Mr Brownlee is not tasked with making decisions on the future of any of our other major cities. Oh, wait.

If Steven Joyce is still swinging wildly, Brownlee had no reason to comment yesterday. But some other players were put in a difficult place by the news. Cameron Brewer issued a bizarre press release that declared this to be bad for Phil Goff.

Goff himself responded very smartly by saying the government could and should clear up the matter of the actual sum of its contribution by treating the CRL the way it treats Roads of National Significance, and funding it in full. Key had, after all, almost said the proposed East-West freight road was a RONS when he described it as "a project of national significance" whose consulting process would consequently be streamlined. Who pays for that is an open question, but one would think the council is now in a position to sit back and consider offers from the government. Ratepayers will cover intersection upgrades and the like, but this is really Key's gig now.

That fact seemed lost on Goff's fellow mayoral aspirant Vic Crone, who despite having been at the lunch, took most of the day to get out a statement that said very little apart from this:

Auckland Mayoral candidate, Vic Crone, is welcoming the Government’s funding announcement to bring forward the construction of the City Rail Link and the East-West connection as a win for Auckland but says strong leadership is now needed to deliver the projects ...

"Managing the delivery of these major projects without blowouts, delays and disruptions is going to be critical,” says Ms Crone.

Ms Crone believes she has the leadership background needed to ensure responsible spending and reduce council waste with 20 years of business and high level executive experience.

“As Mayor I will safeguard the interests of Auckland ratepayers, making sure significant projects like these are delivered on-time, on-budget, and with minimal disruption to Aucklanders.

But, of course, the East-West Connection will very largely be built and funded via NZTA. Not the council or Auckland Transport.

Key's speech also covered the issue of housing supply. My fellow blogger Ben Ross thinks that there is a subtext to what Key said that signals government commitment to the principles of the Auckland Unitary Plan. And he may well be right: because there is no way to "continue lifting the supply of new houses in Auckland to meet the demands of this growing city" without fitting more dwellings in Auckland, and not simply endlessly expanding the hinterland.

This signal would not come as happy news to Act leader and reborn enemy of market freedoms David Seymour, who was quick out of the blocks yesterday with a really weird statement declaring that the government should have used public money to extort Auckland Council into dumping the core principles of the Unitary Plan.

It will doubtless cause problems for others in Auckland's centre-right establishment too. But it may well gradually become explicit. Yesterday I revisited the 2013 Media3 programme in which Todd Niall, Simon Wilson and Bernard Orsman talked about the media and the Unitary Plan (it's an interesting watch, from about 12:50). In his excellent set-up track, Jose Barbosa notes this quote from Bill English to Tod Niall in an RNZ reporting on the frosty relations between the council and central government:

We cannot let 20 planners sitting in the Auckland City Council offices make decisions that will wreck the macroeconomy.

His beef was the council's preference for housing growth within existing boundaries and near to existing infrastructure. Less than a year later, English gave a speech still defending "growing out", but newly lamenting the loss of focus on intensification as a result of opposition to the Unitary Plan proposals:

"What's actually happened is that the local authorities were keen for a denser city, but the inhabitants weren't, so they've jettisoned a fair bit of the densification aspect," he said.

"So if Auckland wants to grow now, it has to grow out because you don't want it to grow up. Now that's a fair choice, but please don't stop it from growing out as well, otherwise we'll get another few years of 15% house price growth and you get a real mess when it crashes," he said, adding the special housing areas agreed under the Housing Accord with the Auckland Council "do spread the city because the planning rules don't let you do anything else."

"We're indifferent as a government as to whether you grow up or out. But you said don't grow up, so we expect to help you grow out."

That was a sharp smack on the head for the centre-right NIMBYs. Then, last year English actually called on Auckland Council to "loosen the rules" to allow greater housing intensification within existing boundaries.

I think there's more to come on this, and that what is unfolding gives a quite clear picture of the way the current government responds to evidence. Its default lies with familiar political interest groups, but will gradually be wound back if and when stakeholders it needs, or a critical number of the opinion-poll public, have responded in a way that poses a political problem. I suspect this principle applies far more widely than in just the regional planning sphere.

In other words, the key to winning change seems to be to first make not changing a political problem.