One of the Act Party's founding conceits was that its ideas represented a better way for everyone. Yes, its financial support might come from the very rich, but classical liberalism meant opportunity for all. Roger Douglas came not to uphold privilege but to bury it for good.

In truth, the dream was sullied from the beginning by the presence of punitive social conservatives in the party ranks, and the masses showed no great love for the party's ideas. Act began to look less like a party of visionaries and more like a party of weirdos and chancers.

But even when Rodney Hide became the MP for one of the country's wealthiest electorates, Epsom, in 2005, the party could claim a little of the dream. Hide was coarse, he went to school in Rangiora and had worked on oil rigs – he might represent the burghers of Epsom, but he was not of them. His successor, John Banks, could have have been the working-class hero the party dreamed of, but never really believed in what Act professed to stand for.

And then, in 2014, came David Seymour, the current holder of the electorate that is now Act's sole source of political oxygen. Seymour mght have touted freedom and opportunity, but he was almost immediately all about the protection of privilege. The leader of the party of property rights went to war to prevent developers in Epsom exercising theirs.

In an extraordinary 2015 interview with Interest.co.nz, Seymour railed against "freeloading developers" who sought to build on land they owned in his electorate. He suggested that the electorate's two sought-after state schools, Auckland Grammar and Epsom Girls Grammar, should be able to exclude the children of apartment-dwellers as an alternative to the schools reining in their zones. Because, after all, existing residents had paid for their privilege. They were entitled to it:

Seymour said the risk was that the Grammar Schools may eventually have to restrict admissions, which could affect the entitlements of those who had already bought into the Grammar Zone for their children.

"That's the sort of investment that a lot of people have put in and you have to have some empathy for that," he said.

Owners and tenants of new apartment and townhouse developers in the zones were effectively free-riding on the benefits of being in the zones, which could ultimately hurt the rights of those already in the zones.

So that's the context for Seymour's recent odious letter to Epsom residents, fanning concern about a development planned by Housing New Zealand for a property it owns in Banff Avenue, Epsom – in-zone for  both Auckland Grammar and Epsom Girls, where big backyard swimming pools lie limpid in the aerial photographs. 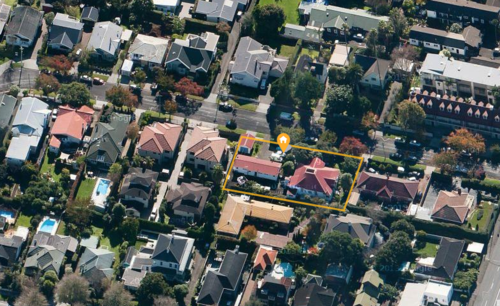 In the letter, he invited them to a public meeting about the plan, which he said would put pressure on parking and other infrastructure. And:

There is also a chance that some of the future residents will have social and mental health issues who will need to have special support measures in place.

Housing minister Phil Twyford has leapt on the letter, and rightly so. It's nasty, ignorant and stigmatising. Its message is that people living with mental health issues are not welcome in a wealthy suburb (where, presumably, such things are properly kept behind heavy curtains).

But the video from the meeting suggests that the local residents are quite capable of scaremongering themselves. Neighbour Clare Turner assails Housing NZ's Neil Adams with what she thinks she knows about "P contamination", as if methamphetamine consumed by future residents was likely to prowl along the street to her house. It's perfectly fearful.

The irony is that Epsom is not going to get crazed meth-heads living in its new social housing development. The 25 shiny, new apartments are, says Housing NZ, destined for occupation by retired people and small families. Of course they are. The agency isn't about to buy a fight and its more difficult tenants will be kept well clear of leafy suburbs.

But Auckland has a housing deficit and a social housing deficit. Housing NZ is building to address those, and it plans to more than double the number of properties it has under management in the city. As I wrote in The Spinoff earlier this year, that's what happening at the corner of our street in Point Chevalier, where an old bungalow and a 1950s duplex are making way for five new family dwellings being built by Housing NZ. The kids who move in will have access to a new kindergarten and excellent schools – the latter of which are also feeling the squeeze on capacity.

We've lived alongside social housing for nearly 20 years here, and once or twice over that time, it's been a bit hairy. – much as it was, presumably, in the now-derelict properties that Housing NZ wants to develop in Banff Avenue. A number of our neighbours have had long-term health issues, and fewer than a handful have been mentally ill, too much so, in the end, to sustain tenancies. But people need homes. We all deserve that chance.

If it wasn't already clear, it is amply so now that the leader of the Act Party's role in the electorate he was engineered into is to sustain entrenched privilege and validate fear and prejudice. Perhaps the party should just surrender its founding conceit and be done with it.