I saw Suicide at the Camden Palace on Thursday, October 9, 1987. It was hard going: the venue was kind of a dump, it must have been after midnight by the time they came on, and and when they did, they were so loud it literally made my teeth hurt.

But, you know, they were identifiably Suicide and that was exciting. And Alan Vega was all shambolic cool. When someone down the front helpfully pointed out that he was getting a bit fat, Vega responded.

Maybe you had to be there, but I laughed then and still makes me laugh now. 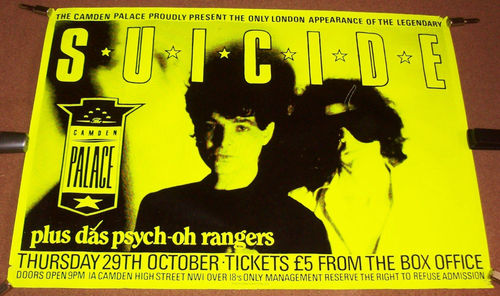 So Alan Vega died yesterday, aged 78. He had a heart attack and a stroke in 2012, so his health had not been the best. Most of the commentary has revolved around his role as the frontman of Suicide, and the duo's first two albums in particular.

That's understandable. Those two albums were like a separate evolutionary branch. They pretty much came out of nowhere and they influenced everyone from New Order and Depeche Mode to Sonic Youth, Nine Inch Nails and Bruce Springsteen (who covered 'Dream Baby Dream' both in concert and on record). And yet, they stood alone. For all that they offered an essential new perspective on rock and prefigured electronic dance music, there was no crop of wannabe Suicides.

Okay, look: I got that Springsteen part off Wikipedia. I'm not gonna be the guy who pretends he's got all the dead guy's records. But I was intrigued by this November 2015 interview that Rolling Stone tweeted after the news broke. In it, Vega tells the story of Cubist Blues, the album he made with melodic superhero Alex Chilton and his friend Ben Vaughn in 1994.

So I listened to Cubist Blues on Spotify (it's on Apple Music too) and holy shit, what a good record. Loose, rambling and – especially gven that Vega spends most of his time in his trademark 50s rock 'n' roll croon – impossibly varied. And it wasn't really meant to be:

To him, he was expecting to record only the scuffling, muted rock & roll track "Fat City," a nearly nine-minute song whose lyrics he scrawled on the day's New York Post and the trio recorded in one take. "Alex was sitting on the ground in a lotus position, playing guitar," Vega recalls of the late-night session, which took place at New York City's now-closed Dessau Studio. "He was in his position for 200 hours; he wouldn't move. I guess he smoked pot or whatever."

Vega thought they were simply going to record a single, but they ended up being there for hours. "He kept saying, 'Let's do another,'" the singer recalls. So they then tackled the ambling, bluesy "Sister," which Vega improvised. "Then he said, 'Let's do another one,'" Vega says. And they came up with 10 more off the top of their heads. "Next thing you know, I literally felt a fire burning in my scalp. I had flames coming out as we were doing the last song, 'Dream Baby Dream.'"

The album was recently re-released by Light in the Attic, who posted one track 'Fly Away', on YouTube. "It sounds like it should be on the soundtrack of a David Lynch film," Fiona observed as she passed. It does.

So cheers, Alan Vega. You were a proper New York person.

My friends The Onedin Line have dropped the first song from their recording session with Mario Posa. It's a warm, jangly taster for an EP out later this year:

Having heard it, I can say there's another song that's a stone cold indie-pop hit on the EP, but this is very nice to be getting on with.

The Experiment is back for 2016 this weekend at Galatos. The genre-stretching festival's lineup includes familiar names like Anthonie Tonnon, Weird Together and Soccer Practise alongside theatre and dance from the likes of Disco Bloodbath, Pretty Asian Theatre and Jahra Rager. All the rooms will be open. A two-night pass for Friday and Saturday is $35 at Under the Radar and there are single-night tickets too.

And next month, Ladi6 Parks is back with Parks, Julien Dyne, and Brandon Haru for a reprise of last year's studio-on-stage jam The Alpha Sessions. They'll be working it out in Wellington, Auckland and Christchurch.

Free download from Rock 'n' Rolla Soundsystem: their edit of a prowling tune by the French producer Guts. There's some Gershwin way back in there...

A deep, lazy soul groove from local lads Leisure. Twenty thousand-odd plays on Soundcloud in the three days since they dropped it:

And a supple, funky edit of Marlena Shaw's classic 'Woman of the Ghetto'. Click through for the download: