Oro Festival went off at Woodhill Forest on Saturday, blessed with some lovely autumn weather. It was an ambitious show – although given the scale, more a big outdoor party than a festival as such – and not everything went right. The bar didn't work (although the Hallertau beer was delicious if you could get one) and I'd had considerably more than my fill of pop drum and bass by the time SoccerPractise took the stage at 5pm. And then after SoccerPractise, Jeru the Damaja just got it totally wrong and spent the next hour and a half loudly and painfully dying. If he'd just shut up and rapped a few tunes ...

But the site is fantastic and the ambitious project of getting nearly all the punters to the site and back to the city by bus worked very well. (My crew managed to be first aboard a double-decker bus back and enjoyed the upstairs front seats all the way. We totally felt like legends.) The portaloos were top-notch, if too few in number (just get in porta-urinals next time). And having been at a couple of events this summer that were overseen by the dreaded Red Badge security, it was also really nice to see security done well. (That was certainly aided by the truly blessed absence of drunk twentysomething douchebros.)

The concert production was absolutely top-drawer. Everything sounded great without being deafening and the lights and LED screens bordered on the hallucinogenic. SoocerPractise stepped up and used that opportunity really well and Dave Seaman's set demonstrated why he's a DJ legend.

And Underworld? Underworld were amazing. I've seen them before, at the 2003 Big Day Out. This time their show was at once spectacular and intimate – and, I fancied, very British. I thought I heard echoes of The Fall in amongst the beats and and it felt more like a performance, the work of artists, than you might expect of a voice-and-machines duo. They seemed to be loving the setting too.

And yes, of course, they finished with that great English folk song, 'Born Slippy'.

I think Dave Roper and his team deserve great credit for pulling off something so innovative, and their partners, Ngati Whatua o Kaipara, are to be congratulated too. They're aiming to do it again next year and I hope they can.

If there is a show next year, I'd like to see more bar and toilet capacity, of course. And musically? I reckon there's scope for something more experimental in the afternoon. Something like Floating Points on that stage would be brilliant, or a wide-ranging Theo Parrish set, or some deep local electronica. This could be a showcase for electronic music of all kinds.

Anyway, here's a pic of the remarkable sky as the sun went down behind the hills. 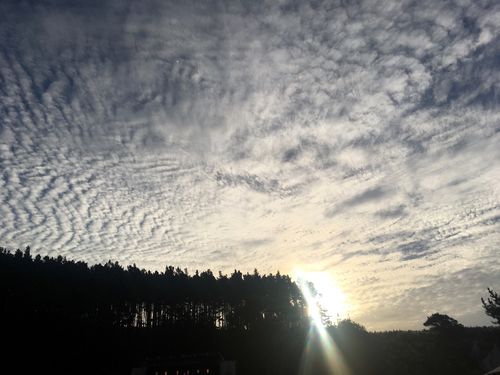 And a snippet of Soccer Practise:

And someone else's video of 'Born Slippy', because I was not about fiddling with my damn phone at that point ...

Next Saturday, the 22nd, is Record Store Day.

In Auckland, Southbound Records say they'll have around 300 of this year's RSD releases available first-come-first-served from 9am. And they have live music from 2pm, with Stretch playing songs from his debut album Bury All Horses, then Jed Town's group Ghost Town perfrming and signing copies of their album, Sky Is Falling. Keep an eye on Southbound's Facebook page for updates.

Real Groovy also has quite a programme of events, with live performances including X-features (Jed Town's a busy boy that afternoon!).

In Wellington, Simon Sweetman has the lowdown on Slow Boat's RSD activities, which include performances by Teeth and French for rabbits.

Feel free to chip in in comments with anything I've missed.

The 22nd is also the day of JPSE's sold-out show at the Hollywood in Avondale. And ahead of that, 95bFM's Justin Redding talked to Dave Mulcay about his musical life in JPSE and elsewhere. The interview features some previously-unheard live-to-air material from the group's 1993 US tour.

Further to last week's post, the managers of The King's Arms have affirmed that it's "business as usual".

Ban Ban Ton Ton blog has an interesting interview with Ben Stevens, the founder of the new Wellington record label Strangelove Music – about, among other things, why he's chosen to debut his label by releasing a 34 year-old Portugese pop record.

Ben's release plans for the rest of the year do sound interesting:

Its a bit magpie-ish but I hope there will be some sense of musical cohesiveness coming through with future releases. There’s 7 or 8 things at the moment mapped out over the next 18 months all going to plan. Some beautiful timeless music from Cathy Vanishing Twin; a project by Simplex 2 – oddball Australian session music that was never properly released which my buddy, Jeremy Crown Ruler, discovered. Some very special Scandinavian material and another Portuguese artist to come.

I’m also headlong into developing a compilation of 1980s Leftfield / Avant material from New Zealand, which has been a huge amount of fun and very revealing. Connecting with local music mafia I didn’t already know and burrowing through Radio New Zealand’s station archives.

My sense is that there's a whole bunch of oddball 80s material waiting to be rediscovered here.

There are some jazz things happening.

Ijebu Pleasure Club celebrate a year in business with a show (with TV Disko) at Golden Dawn on the 28th.

And old 70s "spiritual jazz", in the form of the Lloyd McNeill Quartet's Washington Suite, which has been re-released in all formats by Soul Jazz. I grabbed the MP3s of this earlier in the week and it's just a beautiful record. It's like this ...

And finally, Open Culture recalls one of the great Sun Ra stories.

The now-LA-based Chelsea Jade dropped a new pop tune this week, and it's pretty glorious:

Bob Moses get the Love Thy Brother treatment. Smooth and heavy ...

Which I found in Beam Me Up Disco's Spring Disco Chart ...

A particularly good episode of Jazzie B's Back to Life radio show for your long weekend:

And finally, this from Hamilton's Terrorball, if only because my darling threatened me with bodily harm if I didn't stop it. There's something in water in H-town. Something strange. (Free download if you're brave enough.)