Things are heating up ahead of next Friday's The Others Way Festival. Sneaky Feelings first album in forever, Progress Junction, is released on the day of their warmup show at Hamilton's Nivara Lounge next Wednesday. It's a canny collection of songs – three from each band member – that doesn't sound quite like any of their previous releases, but is most identifiably Sneaky Feelings.

(Note that there's a Hamilton sideshow featuring Disasteradio and All-Seeing Hand the following night at the same venue.)

Elsewhere in the lineup, I mentioned the great new Disasteradio album last week. There's also the new single, ahead of their debut album, by Hex (see an interview here on Under the Radar):

The Friendly Poetntial crew have announced that they'll be joined at their show by k2k – aka Katherine Anderson, who makes this kind of smooth house groove:

Wax Chattels have a new single streaming on Under the Radar (along with an interview). It's about Gillian Anderson. The song, that is, not the interview. Well, okay, the interview too ...

And of course, there's the Going Global Music Summit running on the Friday and Saturday.

And here is the timetable for next Friday. 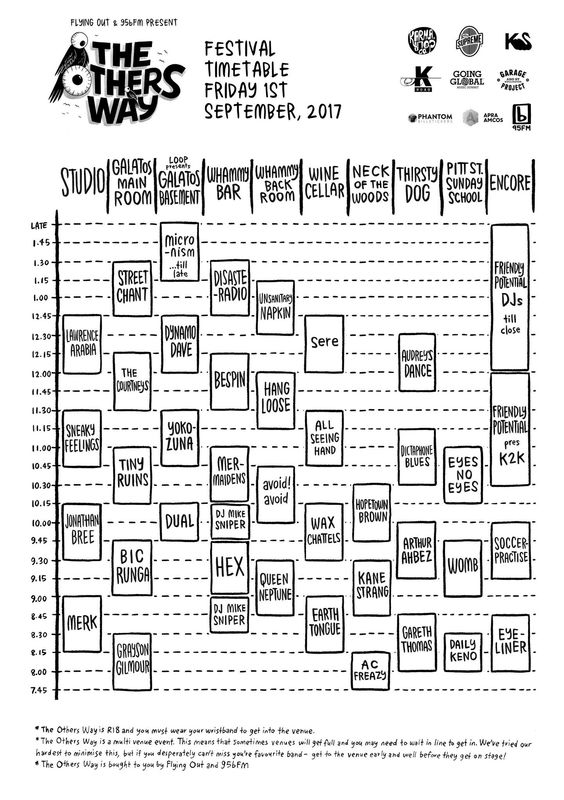 Oh, and The Others Way will also feature Silver Scrolls finalist Bic Runga, whose 'Close Your Eyes' was included this week in the awards' first ever all-female finalist lineup, along with Lorde's 'Green Light', Aldous Harding's 'Horizon', Chelsea Jade's 'Life of the Party' and Nadia Reid's 'Richard'.

If five women out of five is a first, it's not exactly a surprise: women have been been making much of the creative pace in New Zealand music. The Apra initiative to improve gender parity in its overall membership – announced three weeks ago – is well-timed.

PS: I am Team Nadia, and 'Richard' isn't even my favourite song on Preservation.

Next Friday is also the release date of Neil Finn's new album Out of Silence – which hasn't been recorded yet! That all happens live on the internet tonight on Neil's YouTube channel, from 7pm. These sessions have been my last few Friday nights, and I'm just full of admiration for Neil for what he's doing here.

To keep you going till then, here's the archived stream of last Friday's "gig night" in the studio, which featured an audience and a great cameo from Onehunga's Swdit:

Alan Perrott has done a really nice interview with Murray Cammick, whose exhibition of rock 'n' roll photography runs until Sunday at Black Asterisk gallery on Ponsonby Road. Murray will be DJing there on the final day from noon till 3pm, which is all the reason you need to pop in.

The story also features a great photo of Murray himself. And Murray has just shared this picture taken by Terence Hogan in 83-84 – which reminds me rather startlingly of how young Murraywas when he hired 20 year-old as deputy editor of Rip It Up.

And finally, the gallery has republished Murray's account of how Bob Marley invited him to play football, which includes this immortal memory among others:

Within 24 hours of arriving in New Zealand, the tour party had put out a desperation call, they’d used up all the herb.

Someone had grossly underestimated what Marley and entourage needed to keep the show on the road.

Dangerous Minds has a nice story on the last night of Iggy Pop's The Idiot tour, which was also the last night that David Bowie played in Iggy's band.

The New Yorker on how the "Golden Record" that 40 years ago went out onto the cosmos with the Voyager 2 probe, was compiled. It's by Tim Ferris, the science journalist who was part of the wonderfully-named  Voyager Interstellar Record Committee overseen by Car Sagan.

Ferris puts to rest the story that the committee tried and failed to license the Beatles' 'Here Comes the Sun', but also shares this:

I sought to recruit John Lennon, of the Beatles, for the project, but tax considerations obliged him to leave the country. Lennon did help us, though, in two ways. First, he recommended that we use his engineer, Jimmy Iovine, who brought energy and expertise to the studio. (Jimmy later became famous as a rock and hip-hop producer and record-company executive.) Second, Lennon’s trick of etching little messages into the blank spaces between the takeout grooves at the ends of his records inspired me to do the same on Voyager. I wrote a dedication: “To the makers of music—all worlds, all times.”

The occasion is the impending release of a 40th anniversary box set of the recordings. You can check out a sampler here:

Island Records has posted Keep On Running, the excellent 2009 BBC documentary about the label's history, on YouTube:

A swoony new serving of R&B out today from Leisure:

The pulsing 'If Only', from Racing's EP The Bass, out today and on the usual services: