I was flattered when I was asked a while ago to make a contribution to Base FM's Cover Story II exhibition – but also a little flummoxed. The show, which launched on Wednesday, asks DJs to nominate a special record and tell a story about it. I loved the first round last year. But the second one focuses on New Zealand records, and while I have some local dance and hip hop vinyl, I knew there would be others who could talk about those records more credibly than me.

And then I remembered Stridulators.

Stridulators were Steve Roach and Chris Burt, who had played guitar and drums respectively for the new wave band The Techtones. Their only record as a duo, a 7" single in 1984 (House of Squirm, distributed by Flying Nun), is not at all like The Techtones. Like many great New Zealand records of the time, it's a DIY recording. But rather than reaching back for a lost rock 'n' roll essence, this haunting, surging creation of layered drums, synthesisers, guitars and vocals seems to be pushing forward for something new.

I chose the b-side, 'The Inside Track', rather than the other, 'Queue', because it's more of a groove, and because I had actually played it to people as a DJ – a requirement of the show.

There followed a few reminders of the fallibility of memory. My recollection was that it had been recorded at Steve's flat at Rosslyn Apartments in College Hill. But it turns out that The House of Squirm was actually Chris's house in John Street.

But there are reasons that I associate Rosslyn Apartments with that time. It was quite a place. I was the 22 year-old deputy editor of Rip It Up, and my boss, Murray Cammick, had a flat there with Simon Grigg. Steve originally lived there with Ngila Dickson, who would go on to win an Oscar for her costume design in Lord of the Rings. Mark Phillips, who had launched Auckland club culture with Peter Urlich at A Certain Bar, lived there too. Trevor Reekie ran Pagan Records from one of the flats, Roger Shepherd lived there later on and future EMI Music NZ boss Chris Caddick was there too. Then there was film-maker Willie Keddell and his impossibly elegant Dominican girlfriend, artist and activist Charo Oquet, who were worldly, interesting and kind.

I sorted most of that out for my text, but in the process, got put wrong by someone who told me that it had been made on a TASCAM Portastudio, essentially a mixing board that could record four tracks to cassette tape. My memory that the principal recording was actually done on a stereo cassette recorder turned out to be correct. (The guitar/organ/drum groove was then transferred to a reel-to-reel four-track for overdubs.)

The Portastudio factoid remains in the text at the exhibition, but that's okay, because it has a nice resonance.  Which is: that same year in Chicago – hell, probably at the same time – Jamie Principle made the first draft of 'Your Love' at home on a Portastudio. People were trying new things.

The 7" is Stridulators' only vinyl release (it followed Squirm Songs, which was only released on, you guessed it, cassette tape) –  but it had a life afterwards. The Headless Chickens covered it on the 1995 version of Body Blow (Chris Matthews was a big fan):

Both Steve and Chris went into screen sound post-production. Chris specialised in sound design – and when he set up his own award-winning studio in 1992, he called it … The Inside Track.

The thing was, neither Steve or Chris had listened to that record in many years. Musicians do that: they forget not just how much other people liked a piece of work, they forget how much they liked it. Steve said he couldn't believe how good it sounded when he went back to it. The key, he thought, was a matter of the extra space afforded by the absence of a bass guitar – and their very careful approach to recording.

The record itself offers a shuddering bass that simply wasn't a feature of New Zealand pressings at the time. There's just nothing else like it and to me it represents a unique branch of the evolution of New Zealand music.

Which is all very well, but it's been unheard by almost anyone for more than 30 years. There's a rip of 'Queue' on YouTube but 'The Inside Track' isn't anywhere. Well, until now. Steve and Chris have kindly provided me with high-quality WAV files of both sides. The higher-quality files reveal more of the layering that went into the recording – but, oddly enough, I think the vinyl still has more of a bottom-end kick.

I've uploaded them to Soundcloud for you to hear – play them loud – and Steve and Chris will get them up on Bandcamp when they get their act together.

Indeed, they might do more than that. Steve's amenable to re-releasing Squirm Songs after some tidying up. And at Wednesday's launch, we talked about The Techtones' lost album, TT23, recorded by Doug Hood on that four-track. As David Kilgour observed recently, the way that album sounded was a key influence on The Clean's decision to make Boodle Boodle Boodle with Doug and the four-track.

It's beeen good seeing swathes of local back-catalogue get digital re-release in recent years, but while streaming is cool and all, I think there's a lot to be said for making certain records available in good, lossless formats.

Anyway, it's been a really nice experience giving proper recognition to a forgotten, important record – and it was great seeing both Steve and Chris at the launch. 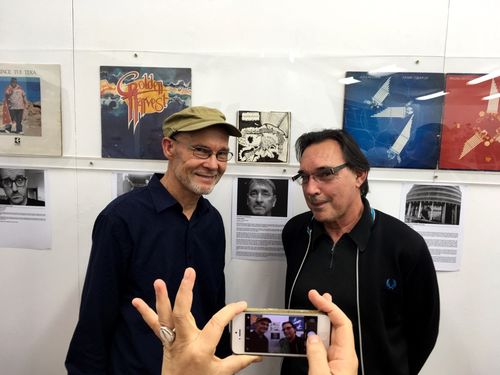 I think they were surprised by what an event it was – Base FM know how to throw a party.

Cover Story II runs at Studio One Toi Tū, 1 Ponsonby Road, until May 13.

Among the crowd at the launch was Sandy Mill, who shared the happy news that she's finally about to start recording her solo album, with Milan Borich on drums, Jeremy Toy on various and her husband Andrew Park on bass. That's a lot of musicality there.

Sandy's also a DJ (we shared a night on the decks at Golden Dawn last year) and I think one thing you can count on is that whatever she's gonna do, it'll be funky.

Staying with the forgotten-gems vibe, I'm pretty excited about the fact that micronism's album, Inside a Quiet Mind, has been remastered and is up for release in digital and – for the first time! – on vinyl, on July 21.

This album, originally released in 1998 on Kog Transmissions, was a big influence on the emerging electronic music of New Zealand. Fittingly, it's been remastered by Kog co-founder Chris Chetland. There are more details and pre-orders on the Bandcamp page, and for now, there's this extremely-tasty-sounding preview:

Oh look, one more out of the archives. This week, Ed Kuepper tweeted this recording of The Saints playing at the Hope & Anchor in London in 1977. It sounds bloody amazing:

Dub Terminator is back! The Auckland producer teams up with Ras Stone again for this impeccable slab of digital reggae. Check out his Soundcloud for three extra dubs of the same track.

Friendly Potential this week presents a two-hour treat from the highly-capable hands of Stinky Jim. And it's downloadable! Get yourself some explorations.

And finally, longtime gig archivist Darkstation was there last Saturday night when JPSE and friends played in tribute to their friend and colleague Jim Laing. And he's posted this. Downloadable, just quietly.