If I was to say I try stay up to date with trends in popular music, that wouldn't quite be it. It shouldn't be an effort to be interested and in general it's not. I like new things. But it occured to me the other day that in the case of hip hop, I'm generally some guy stranded in the 80s.

I was 20 the year 'The Message' was released and still in my 20s when I saw Public Enemy, Boogie Down Productions, De La Soul, the Jungle Brothers and a Tribe Called Quest play in London. All that remains hip hop to me. It's not that I don't like contemporary hip hop and R&B per se, but apart from locally-made hip hop, where there's an obvious and easy connection, I just don't have any really good reference points for loving it: all the cool kids love Drake and I don't relate.

Which is odd, because as QuestLove of The Roots writes in How Hip-Hop failed Black America, a series of six essays for Vulture, hip hop has not only flooded all the space in black culture, it has effectively taken over popular music.

So what if hip-hop, which was once a form of upstart black-folk music, came to dominate the modern world? Isn’t that a good thing? It seems strange for an artist working in the genre to be complaining, and maybe I’m not exactly complaining. Maybe I’m taking a measure of my good fortune. Maybe. Or maybe it’s a little more complicated than that. Maybe domination isn’t quite a victory. Maybe everpresence isn’t quite a virtue.

The man can really write and in the second part he confronts bling culture provocatively:

Whereas “My Adidas” highlighted consumer items, “Picasso Baby” is all about unattainable luxury, fantasy acquisitions. Within the first ten words of the song, Jay Z ensures that no one in his audience can identify with the experience that he’s rapping about. He would never want to be in a club that would have you as a member. But this doesn’t offend his audiences. They love it. They want to be just like him so they can exclude people just like them.

We live in an era when a good deal of writing about popular music seems redundant in the face of the music's near-complete presence. You don't need to read about it when it's there on your phone, all the time. I lived my young life by NME, but I'm damned if I need Pitchfork in it. But these QuestLove essays? They're really good.

(PS: Something else worth reading -- Pantograph Punch's An Oral History of the Mint Chicks).

So, of course, I didn't recognise the hip hop acapellas Race Banyon threaded into a set of bangers at Saturday night's 95bFM Fancy New Band Showcase, but gee, it was good to hear. It's a while since I've seen a King's Arms crowd go nuts like they did for the young man from Wellington.

And it was quite a shift when we got over to Parnell shortly thereafter to hear The Chills. Quite a few of my friends were there and a good time was had by all, but I found myself  to be down with the kids. You get used to being the oldest one in the room.

Which I was when I popped in to see Race Banyon as his indie alter ego Lontalius (with Daniel Sheep, Dog and Wolf McBride on drums) on the Sunday. But it was a nice room. 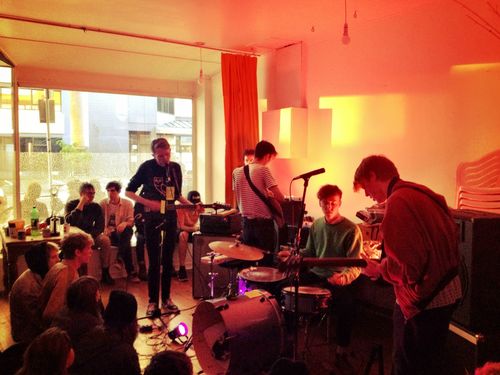 An early slot for Tiny Ruins (who covered Toy Love's 'Rebel') meant Arch Hill's 15th birthday party at the King's Arms on Friday was full from almost the start of the evening. It was a happy evening too, not least when Don McGlashan took the stage with Street Chant for 'There is No Depression in New Zealand', a protest song that never seems to lose its resonance. Video by Paul Robertson:

'No Depression' also happens to feature in Freedom to Sing, a showcase of New Zealand protest songs published this week by NZ On Screen. It's an interesting selection.

Doprah played on Friday night too. If you like Doprah you may also enjoy 'Stay', a song recorded by the band's singer, Indira Force, a little while ago as part of a Smokefree Rockquest prize. It's produced by some guy called Joel Little and it's pretty damn sweet:

You can buy that as a name-your-price on Bandcamp.

The Chills recorded the classic 'Pink Frost' in 1982. And they've just recorded it again. It's not a straight-up rendition of the original, but a different version, with a new intro, that reflects the strength of the current band. It's quite cool too:

Up high on TheAudience this week, this storming new remix from Winston Anthony:

And just to show that not all the bedroom producers are making beats, Fazerdaze, aka Amelia Murray. Nice:

Expat New Zealand band Yumi Zouma have a remix EP which includes this rather entrancing effort by Mark McGuire:

And, finally for cheese lovers, Giorgio Moroder posted a couple of things on his Soundcloud page this week ...

Madonna performing 'I Feel Love' live on the Confessions tour in 2007. Heh.

And an instrumental of Freddie Mercury's 'Love Kills'. It's a veritable Fairlight Fiesta!