Every year it's the same. I'm just not very good at lists. I was momentarily indisposed when they were handing out nerdy, systematising brains. But here we are and every music website in the world is publishing best-ofs full of records I've probably never heard.

Here we go, then. As usual, the majority of new music I've listened to has been from this country. But it seems to me that I've listened more to full-length albums than usual this year, whereas I'm often a playlists-and-single kinda of guy. Here are some of the albums I've listened to most.

I wonder if the reason I've found this record so compelling is that it's so journalistic. Most of the songs – 'Water Underground', 'Railway Lines', 'A Friend from Argentina' – are like a peek around the back of a news story, at the humans who populate it. I've listened to 'Railway Lines' so many times I feel like I know that guy. I think we might be Facebook friends.

It's as if each of Sean Donnelly's songs has been rendered here as a painting, in each the brushstrokes and palette applied to suit the mood. As I wrote back in March, it's an unforced craft; a rich, complex  and organic work.

I wrote in June: "We often fill the music we love with dreams and memories; it’s one of the purposes of music. On In Colour, the debut solo album by Jamie Xx, it’s as if it’s been done for us – the whole record sounds like a dream or a memory of some things." The video of his Glastonbury set was magical and I'm sad that after the collapse of Echo Festival we won't be seeing Jamie Xx here this summer. [Correction: Jamie Xx will be playing the St James on January 11. Whoop!]

Drum machines, shimmering keyboards and layers of shoegazey guitars – but also really good songs like 'Better Off On Your Own' and 'Cool It', whose cut-loose lead break still gives me a kick every time. Turn it up.

I think I'm going to be listening to this album a lot over summer and you bet I'll have the sub hooked up. My introduction to this album, which is as much dub techo as it is reggae, was the band's amazing Town Hall show, which felt so powerful and so urban that it's almost hard to square with the fact that most of their gigs this summer will be at wineries.

Nadia Reid, Listen to Formation, Look for the Signs

I had to wait a while for this because I didn't get a copy before its re-release. We have quite a crop of singers right now, but Nadia Reid seems to have more to give than anyone. The victory of this record is its understatement: the spare, spacious backing and the restraint in Reid's deep, rich voice.

Also: The Phoenix Foundation, Give Up Your Dreams; Courtney Barnett, Sometimes I Sit and Think and Sometimes I Just Sit; Unknown Mortal Orchestra, Multi-Love; Saturations, Schips; Average Rap Band, Stream of Nonsenseness; Chaos in the CBD, Midnight in Peckham; and a bunch of others I can't remember right now.

You'll be able to hear me talk about music and technology with Melody Thomas in one of the extended Music 101 holiday programmes on RNZ National. And among the things I covered in the discussion are two great things done by New Zealand companies this year.

One is the revenue-sharing model debuted by the streaming service Baboom, which upends the prevailing method in a really important way. On Spotify, Apple Music and everywhere else, your subscription money goes into a big pot and is then doled out according to overall share of plays. You might have only listened to Anthonie Tonnon and SJD, but your money's going to Rihanna. On Baboom, your money ony goes to the artists you actually stream. Mikee Tucker also noted an agreement with Apra on the same basis. It's a bloodbath out there in the world of streaming services, but Baboom's model makes an important statement.

The other one is Pyro, the first consumer product from Serato, which is the world leader in vinyl emulation products for DJs. It came out of a very simple need for an app that plays and mixes your tunes at a party. It's iOS-only for now, but an Android version is coming, as is support for streaming services. It turns your phone into a DJ while you enjoy the party, basically. I would think 2016 is going to be a big year for Pyro

I really only took steps to go to Tuesday night's AC/DC concert because my son couldn't afford a tidcket and was sad about that. I'm very glad I did, because it was a LOT of fun.

It's a bit theatre and a bit cartoon (you'd recognise Angus Young and Brian Johnson in silhouette, wouldn't you?), but it's all underpinned by the most bangin' rock 'n' roll. Most of their songs follow a pretty tight formula: the crunching rhythm section and the wild-man lead guitar. But it's a very good formula and their certainly do put on a fucking show.

A word too for the crowd. It was a happy scene, and by no means all just bogans-in-black. Lots of women, kids and oldies – and a lot of people having a very good time. 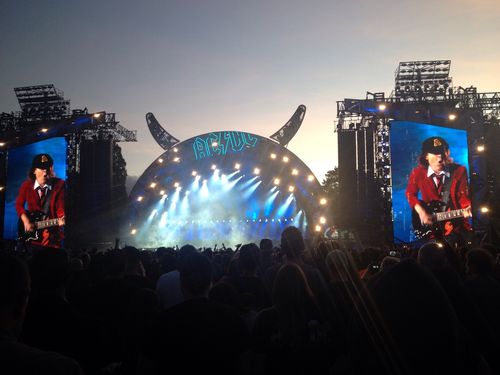 My friend Andrew Moore has had a great year putting on gigs at Lucha Lounge, including a memorable Guided By Voices tribute night. He and his buddies – including his own band, The Onedin Line – are having one last fling at Lucha tomorrow night. 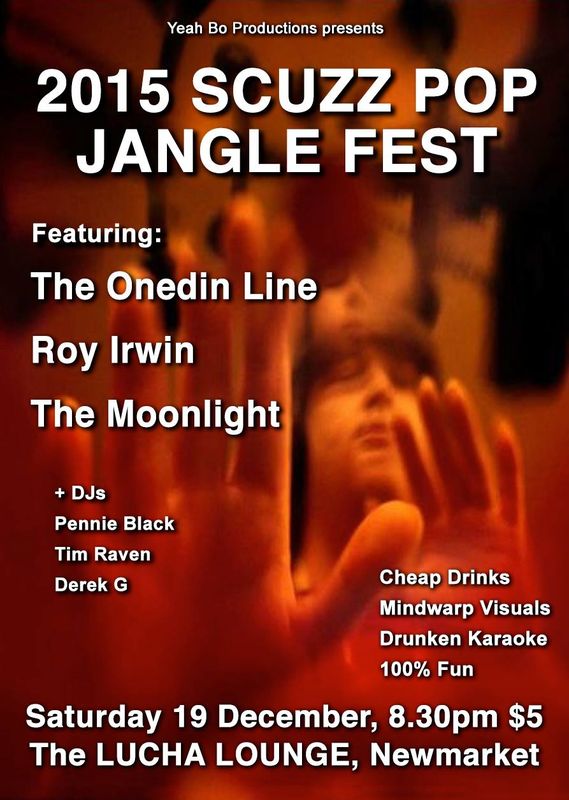 It's a busy night in town, with the Flying Out Christmas party curated by Blink, Superhero Second Line (they're a New Orleans-style second line brass band and they dress as superheroes, like it says on the packet) at the Portland Public House and the Young Gifted and Broke Christmas party at Galatos.

Another free track from Dub terminator and his friends. Serious business ...

Some dancing gear from the Golden Pony. Free download: