In a recent issue of Entertainment Weekly, cover star Joss Whedon is asked why he's often first on the dancefloor at industry events. He replies: "I can't do the foxtrot or the running man. But there's something about movement that feels better than anything that isn't writing."

Because I, too, am a dancer and I, too, am inclined to make the connection between that and writing. They're both about flow. The only other thing that I'd put alongside them is cycling on a good day (although I fully expect your mileage to vary on that).

I have had wild, exultant times on crowded dancefloors, and danced like no one's watching in my own kitchen. (This is not risk-free: I recently sustained a back injury in the course of attempting to combine dancing and the kneading of pizza dough. Be careful, kids.)

I've never had any problem reconciling the disco with the rock stage. I remember being entranced the first time I heard Roxy Music's 'Love is the Drug' at a school disco. I liked Donna Summer and the Sex Pistols. And when I was writing about scruffy Flying Nun bands at Rip It Up, Hal Chapman of Snake T-Shirts, who had the adjacent loft, was once moved to threaten me with bodily harm if I played Shannon's 'Let the Music Play' one more time on the office stereo.

I do realise dancing's not for everyone. It takes a degree of coordination and an ability to be unselfconscious (thinking about what other people think of your dancing will probably not help your dancing) and just move to the music. I can do this -- and yet karaoke is pretty much my idea of hell. I imagine that people who love that feel the ease that I do in having a boogie. The playing of musical instruments also does not come naturally to me.

I have, however, been a DJ. That can be a drag, or it can be full of the joy of facilitating the dance and making the room exult. At the risk of re-entering the music essentialism debate, my general rule of thumb is that I'm there for the ladies. What they want is what everybody gets.

Anyway, should you wish to try out this dancing thing in the privacy of your own home, I've provided some tracks to start with.

This remix of Aretha Franklin's 'Rock Steady', a song about dancing, is one of my favourites:

And Bobby Busnach's monster new remix of another song about dancing is still available for download:

This is quite a banger:

'Buffalo Stance' never fails to win over the ladies:

I'm running up against deadline here, so I'll leave you to suggest your personal dancefloor faves (and of course, your thoughts on dancing) but for the next few hours, I've placed the otherwise unavailable Bobby Busnach remix of the greatest dance track of all time,  'I Feel Love' in my public Dropbox folder as a high-quality WAV file. [UPDATE: Gone, sorry.]

Note: I'll be playing some tasty tunes in the Urlich slot on 95bFM tomorrow, 9-11am. First time playing music on the radio in a long time.

A couple of Fridays ago, Matthew Bannister played the songs from Evolver, his cover of the Beatles Revolver album, live for the first time at the Thirsty Dog on Karangahape Road. The Dog isn't a particularly fashionable live music venue, but it proved to be a comfortable and intimate place for Matthew and his band to play, while the denizens of K Road passed the windows.

The first few songs, including 'Eleanor Rigby' and 'And Your Bird Can Sing' were performed with just a cellist for accompaniment:

And then it was over to the band, and that Madchester version of 'Tomorrow never Knows':

There are a few rough edges to be smoothed: if Matthew and fellow guitarist and singer Paul Methven are going to share a mic Fab Four-style, they may need a little more practice at it. Paul, who handled some of the lead vocals nicely, wound up shouting a bit when he and Matthew were both singing. I'll certainly be there if and when they return. It was a lovely evening.

On the same night a couple of kilometres away, another special thing was happening. For all that she gets ragged on, Amanda Palmer deserves great credit for convincing Peter Jefferies to break his long stage silence and open for her at the King's Arms.

I feelhappy to have played a tiny part in their alliance. A couple of years ago, when I was presenting the Onya Awards as part of Webstock, I arrived at the speakers' dinner and was leapt on by the organisers. Did I know a New Zealand musician called Peter Jefferies? Amanda wanted to meet him and no one else had ever heard of him.

Well sure, I said. He was my flatmate back in the day. (This is New Zealand: the chances of a nominated individual having flatted with someone in the room are fairly high.) Palmer had covered Peter's 'On An Unknown Beach' on her most recent album and wanted to let her "teenage idol" know he'd be a valued guest at any of her shows. I was able to get a contact for Peter, she got in touch, and the following year they played a spontaneous gig together at a New Plymouth record shop.

The King's Arms show must have been a a big step up for Peter, who had basically retired from performance, but I gather he was genuinely moved by his reception. He's certainly still in fine voice, as this clip of him playing 'Electricity' demonstrates:

I'm sure I'm not the only one who'd be there like a shot if Peter was wondering about playing any more shows. 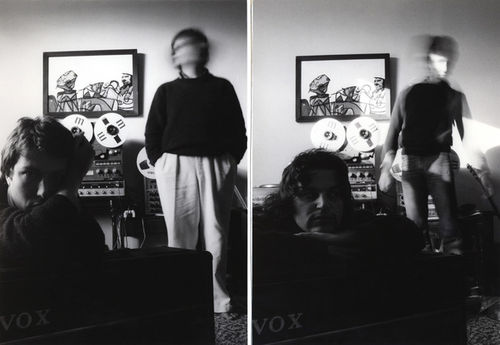 Added to Audioculture this week: Michael Higgins' profile of Tall Dwarfs. Loads of pictorial, video and audio goodness there with it, too.

Over at TheAudience, some filthy-dirty rock'n' roll:

And in a totally different vein, Esther Stephens, who we've previously heard as part of the Young Gifted and Broke collective, has a nice new tune in her own right:

She's also just uploaded a clip of her recent performance at The Wine Cellar. The lady can sing:

And, finally, something of an oddity.

When Media7 was preparing to move to TV3 and become Media3, we had the idea that it would be nice to change up the theme music one more time. It was originally commissioned from SJD, then given a refresh by Disasteradio -- and I asked DJ Scratch 22 to do a new rework for the new show. Unfortunately, it was knocked back by out network executive. We still paid Rodi, but no one ever got to hear it. That seems a shame. So -- here's a zip file of the intro, outro and stings he gave us. Enjoy.