As things stand, Hillary Clinton has won about a quarter of a million more votes than Donald Trump – who in turn has won about 1.5 million votes fewer than Mitt Romney did in 2012. That changes nothing about the result, but does cast some light on Trump's extraordinary and unexpected victory.

It also to some extent addresses the "polls were all wrong" meme. National polls did, after all, predict that Clinton would win more votes than Trump. And it wasn't that they "didn't listen" to Trump voters. They polled them like anyone else. But sampling is about making assumptions – and the assumptions almost all polls made were based on turnout in 2012. The outlier among major national polls was the Los Angeles Times Daybreak poll, which, as the paper points out today, made different assumptions about weighting and was thus closer than anyone else. The Times also says this:

The poll told us in August, for example, that Trump's chance of winning depended on mobilizing white voters who had sat out the 2012 election — something that he clearly has succeeded in doing in several key states.

And it seems evident that the anti-establishment sentiment that produced the Brexit result this year was – on top of simple electoral tribalism – the factor that mobilised those voters. This vote is like Brexit in another way: it manifested in areas that are less diverse and less prosperous.

This is not to say that the assumption about Trump voters being economic victims is correct either. Exit polls show that a majority of less-wealthy voters went for Clinton, not Trump. And those exit polls bear out sterling demographic surveys conducted in earlier in the year by Gallup and Pew.

Gallup – which analysed 87,000 poll responses collected over a year (but had no need to bother with weighting assumptions) found that Trump supporters were not on average economically insecure and earned "relatively high household incomes" – and that their unease with immigrants was cultural rather than economic. They tended to live in markedly less diverse communities, communities which had their own problems.

Pew found more "warmth" for Trump among Republican likely voters who believe the flow of newcomers to the US  “threatens traditional American customs and values". Among Republicans who believe the flow of newcomers (the word Pew used) “strengthens American society,” only 14% felt warmly toward Trump. Trump support also correlated with concerns about immigration, Islam and racial diversity. The same correlations did not manifest around economic fairness or excessive business profits. Trump supporters felt culturally, not economically, insecure.

The New York Times' visualisations of exit poll data are useful here. This one shows the way that Democratic votes were concentrated in the most diverse centres, where Clinton won by much larger margins than Trump won anywhere: 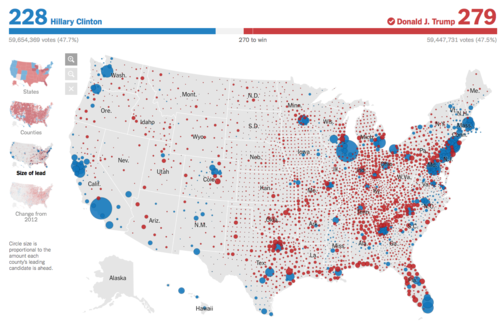 This NYT graphic shows the change in vote. In some areas, Democrat support actually increased, but many others are a thicket of red arrows. 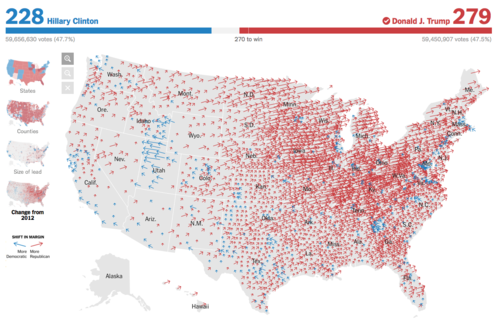 So Trump intuited very well the ideas that would mobilise the white votes he neeeded. And yet, his sweep has been achieved with fewer total votes than Romney got in coming a poor second four years ago. The Democrats, of course, shed even more votes. But it seems fair to say that whatever mobilised Trump's vote (and let's be clear that includes a somewhat better result than Romney with Latino Americans in the midst of overwhelming white voter support) was not good for overall voter turnout.

Indeed, this graph offers a very different narrative. One that suggests what what happened yesterday was not a Trump surge but a return to the mean as Barck Obama leaves the stage. Clinton was not able to motivate turnout the way Obama did – but neither was Trump. 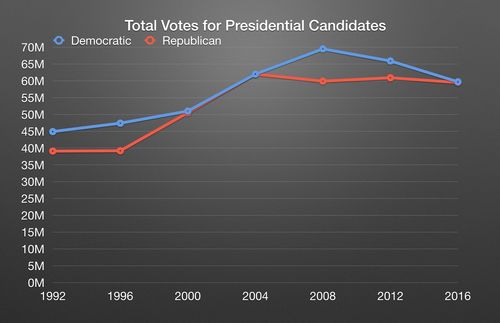 The other problem – the really, really big problem – is what you do with the ideas that achieved that Trump's victory. Remember, Trump's closing campaign video was a full-noise Jewish-conspiracy dog whistle. Trump's promises to build a wall with Mexico, to summarily deport millions of undocumented immigrants and to impose some sort of ban on Muslim entry are all both idiotic and impractical. It is difficult to satisfy the urges raised and remain a modern nation.

There has been the odd troll on social media taunting "liberals" about the loss, but that ignores the fact that it's problematic for conservatism too. Remember, not a single credible newspaper endorsed Trump this year. Papers that had never endorsed a Democrat urged their readers to vote for Clinton. Conservatives are supposed to care about great institutions: Trump has repeatedly given the impression that he doesn't really even understand what those institutions are.

All accounts indicate that Trump is monstrously ill-equipped for government. He has serially stiffed people he has employed or done business with. He has escaped into bankruptcy six times. His beliefs that global trade agreements can simply be renegotiated to America's advantage, that America's partners in longstanding security agreements can be tapped for tribute money, as if they were vulnerable tenants, are bizarre and dangerous. And as Foreign Policy's Stephen Palmer was quick to point out, the Chinese leadership, which had faced dealing with the tough, experienced Clinton, is celebrating. They have cover for their own human rights issues and they'll play Trump like a fiddle.

Trump aides are organizing what one Republican close to the campaign calls the First Day Project. “Trump spends several hours signing papers—and erases the Obama Presidency,” he said. Stephen Moore, an official campaign adviser who is a senior fellow at the Heritage Foundation, explained, “We want to identify maybe twenty-five executive orders that Trump could sign literally the first day in office.” The idea is inspired by Reagan’s first week in the White House, in which he took steps to deregulate energy prices, as he had promised during his campaign. Trump’s transition team is identifying executive orders issued by Obama, which can be undone. “That’s a problem I don’t think the left really understood about executive orders,” Moore said. “If you govern by executive orders, then the next President can come in and overturn them.”

That is partly exaggeration; rescinding an order that is beyond the “rulemaking” stage can take a year or more. But signing executive orders starts the process, and Trump’s advisers are weighing several options for the First Day Project: He can renounce the Paris Agreement on greenhouse-gas emissions, much as George W. Bush, in 2002, “unsigned” American support for the International Criminal Court. He can re-start exploration of the Keystone pipeline, suspend the Syrian refugee program, and direct the Commerce Department to bring trade cases against China. Or, to loosen restrictions on gun purchases, he can relax background checks.

But those are secondary issues; whatever else Trump would do on January 20th, he would begin with a step (“my first hour in office”) to fulfill his central promise of radical change in American immigration. “Anyone who has entered the United States illegally is subject to deportation,” he told a crowd in Phoenix in August.

How the Republicans deal with the disastrous fiscal hole implied by Trump's tax policy remains to be seen. Indeed, almost everything remains to be seen. His policy platform is incoherent and as Osnos notes, even his backers are relying on the assumption that he won't actually do a great many things he promised to do. As Josh Marshall writes, his administration will set about torching the Affordable Care Act without having any real idea of what will replace it.  ( The contrast with Clinton, who was a poor campaigner but, as the New Yorker observed,  offered "a series of thoughtful and energetic proposals that present precisely the kind of remedies that could improve the lives of many working-class and poor Americans of all races", is extremely stark.)

At any rate, America gets another shot in four years' time. By some measures, America will by then have a majority non-white population. But as Richard Alba pointed out this year in The American Prospect, those measures are problematic, in that they work in a way that makes the white population look small. Assumptions based on those measures may have contributed to mistaken assumptions about size and nature of the "white vote".

But ... the Republican Congress's disgraceful refusal to even consider President Obama's Supreme Court nomination of Merrick Garland leaves President Trump the opportunty to appoint a new justice who will be there a lot longer than four years. It's already evident that he will bend to the worst, most illiberal urges of his party in this. In this sense, Trump's contempt for practuce and institution has been pioneered in his party.

The really, big, long problem is climate change. Trump will appoint the extreme climate change denier Myron Ebell to lead his EPA transition team. The hard-won Paris agreement surely can't survive. From a campaign characterised by ignorance and the most feckless, constant lying, this is the most damaging of all deceptions.

There is already plenty of triumphalism about the repudiation of experts and elites. But the rejection of expertise is a dangerous thing. There are reasons America and the world have established institutions. And as dizzying as an anti-establishment lash might feel, rediscovering those reasons could be very painful indeed.

In short: be careful what you wish for.