The results are in and I’m… well I’m not surprised, a little disheartened maybe.

In Keith Ng-esque graphical form here are the numbers: 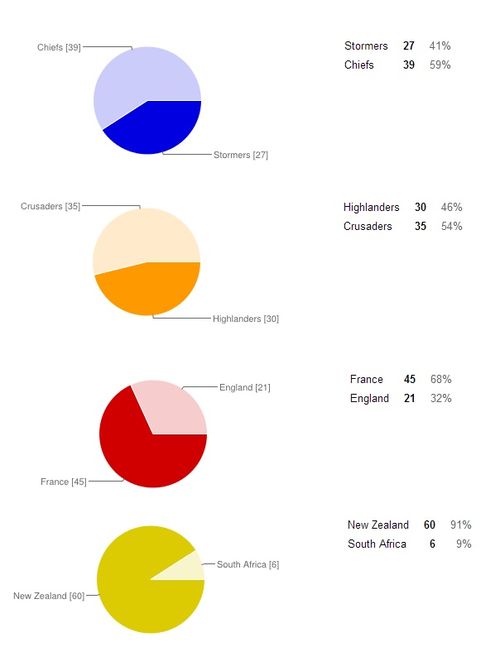 As you can see, in the Super Rugby results the numbers were close with the Chiefs and the Crusaders scraping through by very narrow margins. While in the international category New Zealand beat the tenacious green jersey of South Africa and France had a convincing victory over the white of England.

I’m a little sad that the Stormers wonderful blue and white striped uniform has been bumped off by the Chiefs dark and stormy red and black uniform. Speaking of red and black, the Chiefs will be playing the Crusaders in a rematch of the Super Rugby semi-final this year.

I went back and checked, when the two teams play neither wear their away strips. This seems to be because the component parts of the uniforms clash enough and because the Crusaders have a more vibrant red than the Chiefs darker colours.

Funny enough, I had run this competition a few years back the Chiefs would’ve beaten the Crusaders easily. What were they thinking with that sword? Of course both would’ve lost to the Blues, but that’s by the by.

In the international match up, the “all” black jersey (Caution: jersey may contain up to 20% more white than previously experienced) has been on a very easy run so far with no real competition. Suddenly it finds itself up against the retro, royal blue styling of the French jersey.

The French are a first tier rugby nation with no jersey sponsor. The only one. New Zealand, as I have continually griped about, is no longer on that list. But let’s look at the good things about these jerseys. 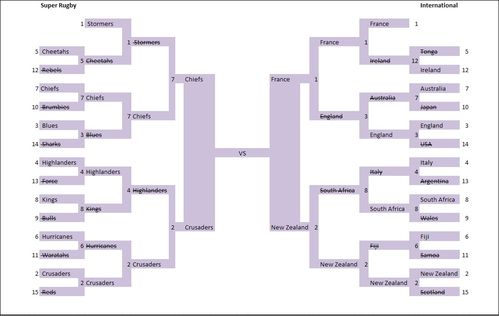 Before I get to the voting form, this weekend just gone there was a test match I should probably mention.

Wasn’t it scrappy? There were some very good things to come out of it sure, like the fact that we won. And, despite the All Blacks looking rusty as hell, it was a convincing win.

Certain big name players ::cough::Israel Dagg::cough:: were invisible for most of the game and our line out needs a LOT of work. The scrums were the oddest part of the game and were just awful. Worse still, we weren’t very good at them. I couldn’t understand the continual “not straight” calls either.

It seems to be part of a worrying trend from referees to not understand relational motion as many forward passes (on both sides) went uncalled in a similar fashion to the ones missed in the Super Rugby final.

I felt that this would be a big game for the All Blacks. All of the build-up seemed to imply that they wanted to make a statement with this game and to rack up a large score. Whenever an interviewer asked about the new Wallabies coach the line was always the same “it doesn’t matter”. The feeling was that the All Blacks didn’t want there to be any glitches nothing for the media hang on to and say “Wallabies rally behind new coach”.

And then there was Quade Cooper. Tweets from inside the stadium suggested it was not solely kiwi fans doin’ the booin’ and I can understand Australian fans frustration. With a new coach in place the last thing they want to see is the underperforming #10 from the last team.

Personally I’m not a big fan of booing a player just because he’s on the field/has the ball (trying to distract him from a task like kicking is different) and I wish the fans who do it would knock it off. Cooper’s just not that important anymore.

Finally, look how awesome these old Aussie uniforms are!