The World Cup starts on Friday and we are all so very eager to see it, then see it end.

As is always the case with large, four-yearly sporting events, there are two parts. Obviously there is the wonderful spectacle of the sport which we stay up late with a cup of Milo to watch. And then there's the heart-breaking waste of resources and potential abuses of human decency that is the running of the thing.

John Oliver has done himself proud explaining the “sausage principle” of it here:

FIFA is a maggot-riddled piece of filth, in my humble estimation. A group that is in charge of something known as the “beautiful game” that have a vested interest in keeping up that appearance, while all the time raking in as much money as they can. (See also: IOC)

With my disgust noted, I am still actually pretty keen on the World Cup. Here is a chart of my excitement levels (x) over time (t): 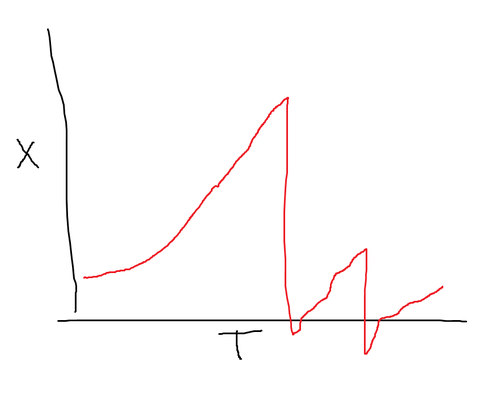 The first big dip you see is the first time someone takes a dive. That second dip is when after the millionth dive or hand ball or whatever, I am told to my face that “this is how the game works” or “rugby’s worse for cheating” or some other crap to try and smooth over what essentially a pretty broken part of the game.

And yet, I’ll be there, Milo in hand, watching the games hoping Germany wins (cause fuck, why not?).

Now because this is me, you possibly think I’ll do some stupid thing where I look at and rank the uniforms. HAHAHA! No. Instead I’m going to point you at Nate Silver’s wonderful sabermetricising of soccer and its associated interactive chart. The tl;dr is Brazil wins and is paying $3.50 at the T.A.B. if you’re curious.

I read Moneyball recently (and recommend it strongly to anyone who likes professional sports) and as I did my mind wondered what other sports you could do this to. Cricket was top of my list, followed by football… IF you can get the data, and I’m not wholly convinced you can. Moreover, “moneyballing” predictions (and predictions in general) get incredibly iffy when it comes to knock-out tournaments (see: All Blacks 1991-2007).

So where will you be watching this spectacle? Probably on TVNZ or the internet, because, like me, you’ve realised that Sky Sport is a rort and that FIFA don’t really need any more money.

But will they call it football or soccer? The NZ Herald seems to think you give a shit about this. And if you are one of those grumpy motherfuckers with British accents at the pub wearing a Phoenix jersey and trying to elbow me out of the way while I’m waiting to be served, then you probably do.

In fact it doesn’t really matter. Like aluminum/aluminium the words are mired in creations and Anglo-American tensions from before anyone currently alive ever existed and frankly by this stage every knows what they both mean, so feel free to use them interchangeably… or use soccer when you feel like trolling your friends who insist on football.

I'm sure I'll be less cynical when the games actually start, let me consult my chart...