I’m not sure if Quade Cooper was expecting boos, when he took the field last week. I mean, it was a home game.

Originally the boos were a form of protest after Cooper’s “brilliant” idea to niggle (and there is no better word for it than that) Richie McCaw in 2011. We booed not so much at Cooper antagonising a helpless McCaw (Brad Thorne was there to help clean up, after all), but for what seemed to be poor sportsmanship. The annoying bugger, who was a fairly good player, now seemed to be specifically going out of his way to be annoying. But since then the “fairly good player” part of Quade Cooper seems to have dropped off.

It must weigh on a young guy like Cooper (25). At the height of your career you had the same profile as a bad guy in professional wrestling. At least he’s better than Jesse Mogg. Though I think Rich Irvine said it best in his latest Sport Review cartoon: 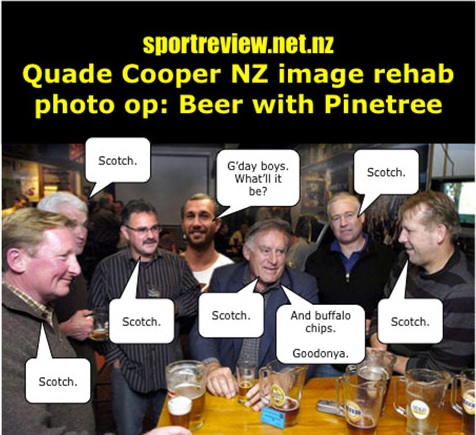 So yeah, it’s probably time to stop the booing. I remember the press conference where a gleeful Graham Henry, when asked about the booing, said that New Zealanders will stop when they want to and that Cooper probably deserved it. Yes he did, but that time has passed, and so has the best part of his career. Perhaps we need to shout something different: 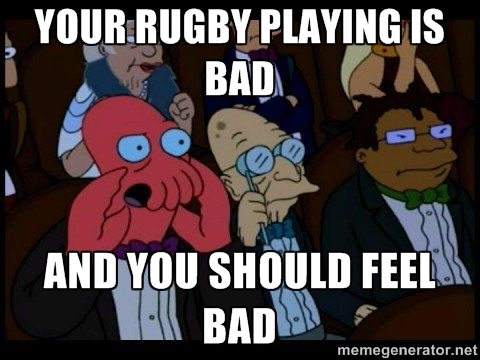 In a corollary, Alex Rodriguez is on the end of some deserved booing from opposition fans. (For those who don’t know, A-Rod has been suspended for a record length of time for using PEDs, but is still playing because he’s appealing the length of the ban). At a recent game against the Red Sox he was hit by a pitch in his first at-bat.

The reason I bring up this moment is because he wasn’t hit by the first pitch, but only because the pitcher was terrible. He was hit by the fourth pitch. All four pitches were inside and close and all were intentional.

It’s worth noting that the pitcher was warned but not thrown out, while Yankees manager Joe Girardi was thrown out for arguing. Have a listen to Girardi on why he defended his player so angrily more than you might expect from a coach who's under attack from that player’s lawyers.

Girardi’s comments at the end speaks volumes about sports fan culture at its ugliest:

“What is wrong with people? You cheer when someone gets hit? Y'know I'm gonna say it again, what if that was your son? Y'know, what if your son got hit? Breaks an arm, gets hit in the head has a concussion? Man, I'd be embarrassed... Wonder what's wrong with our world today.”

As a quick note, I'm out of the country fighting for your freedoms at the latest round of the TPP negotiations this week, so you all get an extension on your uniform voting.

(As of Friday, NZ and the Chiefs have very slim leads over their rivals)