It was taking me so long to draft an obituary of my beloved Alain Resnais for Overland that I re-watched some of his films, in search of inspiration. That’s how I was reminded of the scene in Last Year at Marienbad in which Delphine Seyrig’s character wanders down a corridor and finds inside a desk drawer hundreds of identical pictures of herself.

In the context of the film, the pictures signify Seyrig’s inability to find external evidence of her past that isn’t frustratingly ambiguous or elusive. As a stranger tries to persuade her that they used to be lovers, her only defence is that she can’t remember him, and it gets progressively weaker.

I had forgotten about this brief scene, and I’m struck anew by that image. A single picture, but in an indefinite, infinitely multiplying number of copies. It’s hard not to think of how digital images circulate on the web, or are stored and backed up in the cloud. Conversely, there is nothing so culturally alien to the present time as the idea that there may be only one picture of any one of us.

In my dissertation I drew a contrast between Winston Churchill, whose life was documented in minute detail form the moment of birth, including a great deal of photographs, and my maternal grandmother, of whom there was only one picture before the age of fifty. This one.

Nonna was sixteen at the time, and pregnant with her first child. The picture is so worn because my grandfather took it with him on his military service. I suspect that this was in fact the reason why the picture was taken.

That there is virtually no visual record of my grandmother until her daughter’s wedding, and a very sparse one since, is in no way unusual. It’s not just that cameras and films were still expensive until the 1960s. It's also that the lives of working class people – and women especially – were not deemed worthy of documentation. Nonna shared in this reticence, and was always reluctant to have her picture taken. In the one we selected for her tombstone she looks like she’s saying: ‘Why are you doing this?’

It hardly bears pointing out that we have collectively moved past such prejudice and misgivings, and that most people are as keen to self-document as the state and corporations are to document them, regardless of class – and when it comes to a visual record, even more so. (This at least in Western countries, and probably outside of them as well.) It’s also trite and boring to speculate whether we may be taking and sharing too many pictures, creating a surplus of description that impoverishes each individual image. Which, to the extent that it may be true, is most often meant as a critique of other people’s behaviour, and seldom reflexively, to question the roots of that desire to see oneself socially immortalised.

But I wanted to turn that question around this week, starting from the arresting image of a drawer full of the same photograph. What if you were forced – due to a material constraint that is pretty well unthinkable – to pare down your personal visual archive to a single picture? Which one would you choose? How would you operate that selection? What would that picture come to mean to you, and could you bear to let go of the others? 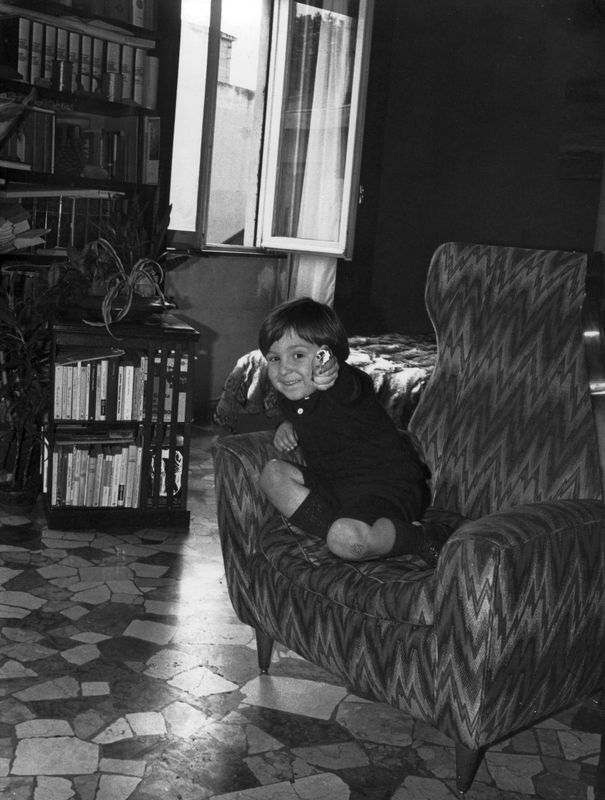 It was taken on a Sunday afternoon, in 1975. I know it was a Sunday, because my father worked on Saturdays and we had guests that day. The photographer was a friend of the family who died just a few weeks ago. There are few photos of him, because he was always the one behind the camera. And he stopped doing it, eventually. He had grown tired of friends using his portraits for their tombstones.

I am attached to this picture because there aren't very many of me as a child, and because I can see bits of the house in which I was born, and how little it has changed (I spoke about this before). Except for the armchair, that I destroyed by jumping on it repeatedly. Were it the only picture of me, I think I could live with that. It would speak to me of another life.

To have a single portrait of oneself means to have one more than almost all of the people in almost all of history. But wouldn't that image become an obsession? What if you forgot everything about your life except the context of that one picture? Or remembered everything, except for that. You are sitting in the garden of a wealthy estate, on a sunny day, not far from a statue of which we can only see the plinth and legs. You seem to be happy. You just don't know why, or who the person in the picture is.