This morning, my older son said “Hey, Jojo! Watch this!” as he playfully piloted a plane into the ground, on his computer, for no reason, just for fun. Completely out of the blue.

I burst into tears. Not completely out of the blue. He had no idea why.

It does my head in: he’s a very well-informed little pitcher with exceptionally big ears, but he’s made it to the age of nine and a half without knowing the full facts of that day.

This is my theory about the long delay in Obama’s speech last night: that he was giving the parents of America a break, letting them get their children to bed (at least as far as California). That way, the parents would have time to think about how to explain, all over again, what had happened on that gorgeous autumn day -- a gift of a day, warmer than it should have been, calm, beautiful, a deep blue sky -- ten years ago, when those children were just babies.

I was living in the moment, hauling my very pregnant self around the neighbourhood, drinking it all in as the clock ticked away my last days of independence. New York Fuckin’ City: it’s a beautiful place, especially in the seasons of change -- spring, autumn --when you don’t have to think about being too hot or too cold, but can just float through the gentle, fizzy, balmy air, and relish living in Metropolis.

The city of the world, in America but not quite of America, the place where those fresh off the boat somehow manage to stay fresh, even on the ground, and there's always room for one more.  When you live there, it feels like the beating heart of the whole world.  No coincidence that it’s home to the United Nations: at street level, it is the united nations. That’s the city my older child was born in, and the nation he was born into.

Who are the people in your neighbourhood? The people that you greet when you’re walking down the street? Before this child could even speak, he knew to wave hello to the Jamaican doorman, the Native American super, the Indian lady in the newspaper kiosk, the Brazilian babysitter, the Egyptian guy in the magazine shop, the Afghan ex-Air Force officer who ran the kebab stand. In New York, everyone's from somewhere, even the ones born right here; his best baby friends were British-Greek-American, biracial White-and-African-American, Pakistani-Jewish-White-American.

People sometimes raise their eyebrows at the hyphenated juggernaut of a surname he shares with his brother -- a compromise between two small dynasties both proud of their names -- but to me, it's the most goddam American thing about them.

Before the baby was born, but after that beautiful day was smashed to pieces, his grandmother died.

She loved New York, lived there herself as an NZBC correspondent in the 1950s, and had a great fund of colourful stories about garrulous cops and dubious television producers. She loved that we were living in the city,  and lived for our stories and photos of where we’d been and what we’d seen, retracing some of her footsteps.

She’d not been well for a while, but the shock of the attack seemed to precipitate a sudden decline, and then she was gone. Because we didn’t know if there’d be a second attack using planes or one that would close the airports, my partner couldn’t fly home to be at her bedside, or even for the funeral. With me within weeks of giving birth, it was too much to risk.

What’s grieving me most this morning is that collective loss. The memory of those weeks and months after the attacks but before the wars is something I’ve suppressed so hard I’d almost forgotten what it felt like.

I can only speak for the vibe in New York, and for the part of it I encountered. But what I remember from those days immediately after the attack is – not trauma, not fear, not fury, although those certainly underlay the city’s mood. But the warm flesh on that frame was a sadness, a patience, a compassion, a depth of conviction that this thing that had happened must not be allowed to stand. That it must not be allowed to overwrite the mood, the meaning, the modus vivendi of the City.

That week, we gathered at the university and sheepishly, sadly, stood next to people with candles, singing “This Little Light of Mine.” 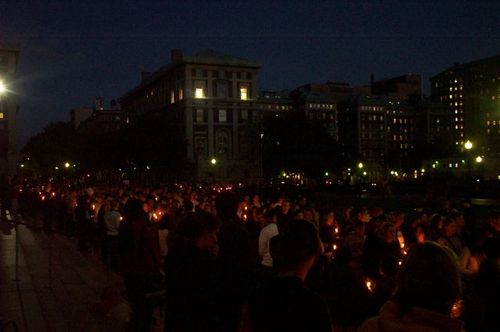 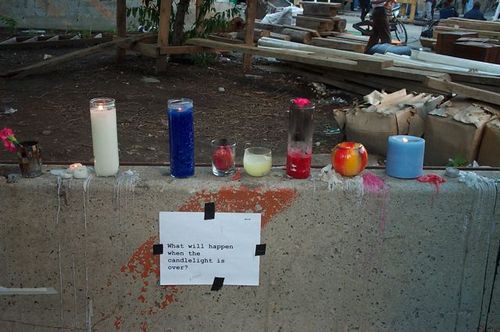 A year and a bit later, we put the fat little toddler in his stroller and marched down Broadway with hundreds of thousands of people against the impending invasion of Iraq, chanting “Not In Our Name.”  Together we testified that no matter how great the hole in the heart of this city, you couldn’t fix it by hurting more people.  (Although, after reading the stories of people on the planes with their children, I would have hurt that man, if you’d held him still for me. I would have.) 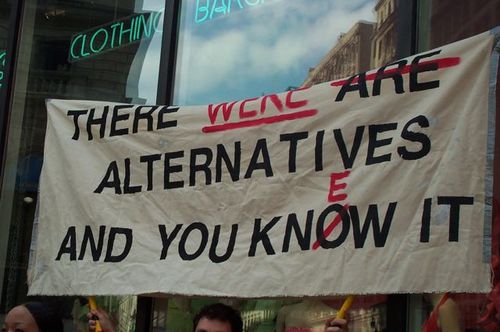 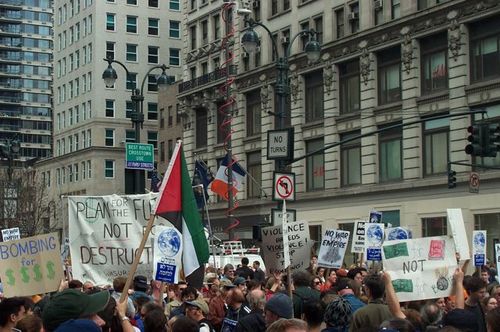 Look, we weren’t politically naïve. We knew that what had happened was part of a larger narrative, one that had begun a long time before, and would continue after we were no longer around to tell it. We knew that our horror and despair mirrored that felt by the victims of violence in other places, carried out in the name of other nations including this one that we lived in. Some of us knew that from experience.

But we thought that, by acting loudly enough, all together at the same time, we could wrest the controls away from the bloodthirsty, cockamamie fools at the helm who seemed compelled to divebomb this thing, this death-drive, into the heart of yet another nation. The passengers on Flight 93 managed to intervene; why couldn’t the hundreds of thousands of people who marched, gathered, spoke, wrote – not just in New York but across the country?

That’s where my stumbling, inarticulate grief is coming from this morning. It’s been ten years of bullying from the top. Ten years of official policy increasingly designed to squash that generous, democratic, mutually supportive impulse. A decade of ever-increasing paranoia and withdrawal and pain, in the place of that first gathering of light and voice and hope. A decade of collective emotional shuttering, political atrophy, an agreement not to talk about it.

I’m sad, and furious, that my child born of that moment – along with his friends and peers, some of whom experience it way more personally on account of affiliation or appearance -- has spent his entire young life in the shadow of both the inhumane act and the official response.

The pinched distrust, the humourless eternal surveillance. Every flight he’s taken, every x-rayed teddy-bear, every stupid argument about taking off his shoes at the security gate, the time his little brother was pulled aside for extra screening, the time I was obliged to hand over a crying infant and submit to a hands-on patdown. In five years’ time he’ll be as old as the youngest prisoner was when rounded up for internment at Guantanamo. It’s a travesty. It’s a tragedy.

So, I told him the short version this morning. He knew the buildings fell down. Now he knows how, and that there were four planes, and two other crash sites, and that some people were braver than you’d imagine it possible to be under such circumstances.

He knew the country is in the middle of two wars, collectively longer than both World Wars; now he knows why, even though there’s no easy explanation that quite makes sense to his ears, or to mine.  He knew that some of our friends are in the armed forces, others were rescue workers; now he knows where, and has an inkling of why they’re not so keen on loud noises, long flights, and burning smells.

The one thing I can’t explain properly is how the personality of this place has changed over the last ten years -- not when it’s all he’s ever known. Nor can I explain why it’s going to be partly his and his brother’s job to try and change it back, even though it wasn’t their fault. Some things are just unfair.

A bad man is dead. Ten years of suspended animation, ten years of sleepwalking towards the future. What next?

Amid the legitimate, involuntary catharsis – ten years, ten years! -- and the strange eruptions of what looks like unseemly joy, I hope for a reemergence of whatever spirit it was that took us to the streets those early days, weeks, months in New York.  A spirit of humility, and shared humanity, and hope, and an expectation of having a voice in what happens next.

We can’t get back everything that was lost, but I want that part of it, at least.

Images below by Gemma Gracewood, taken in lower Manhattan, 2 May 2011 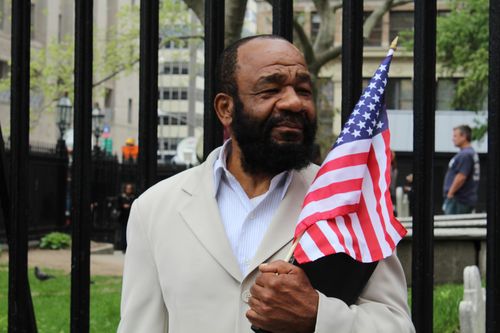 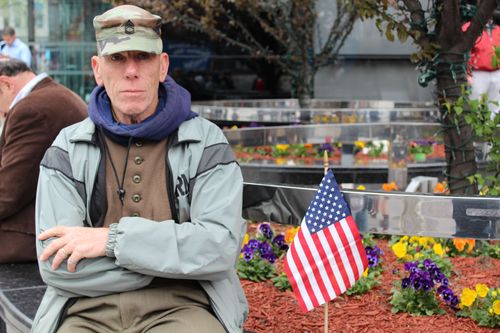 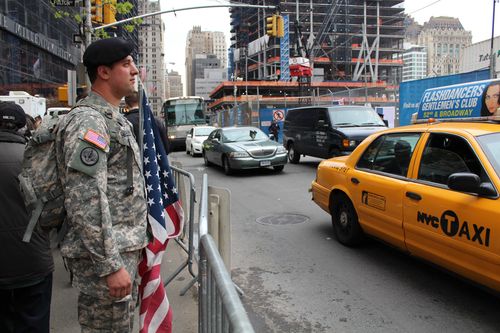 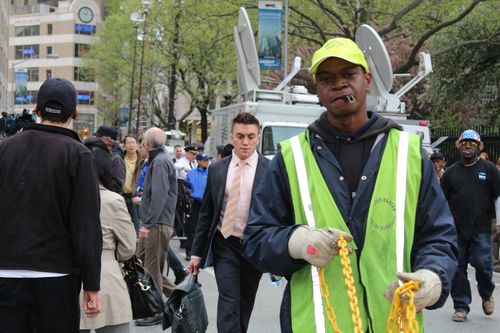 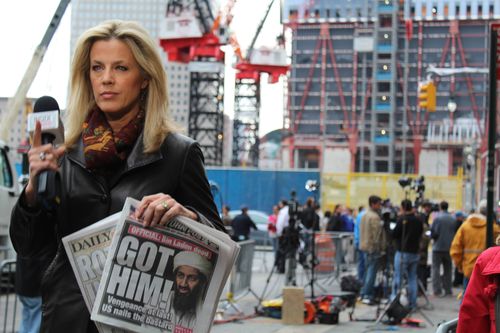 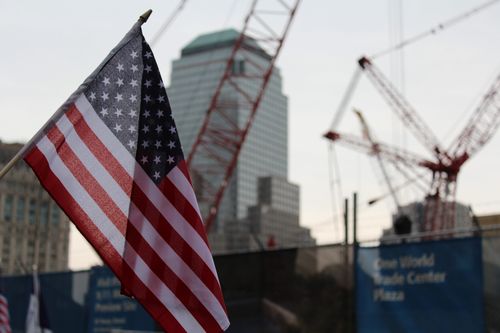 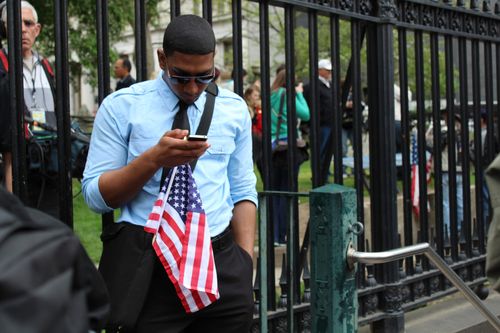 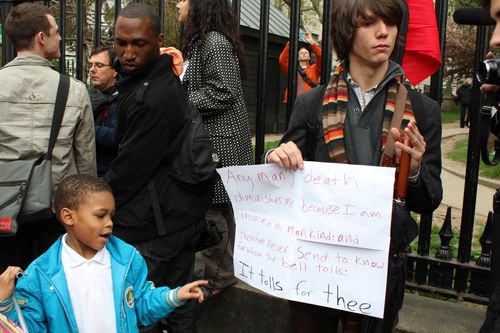 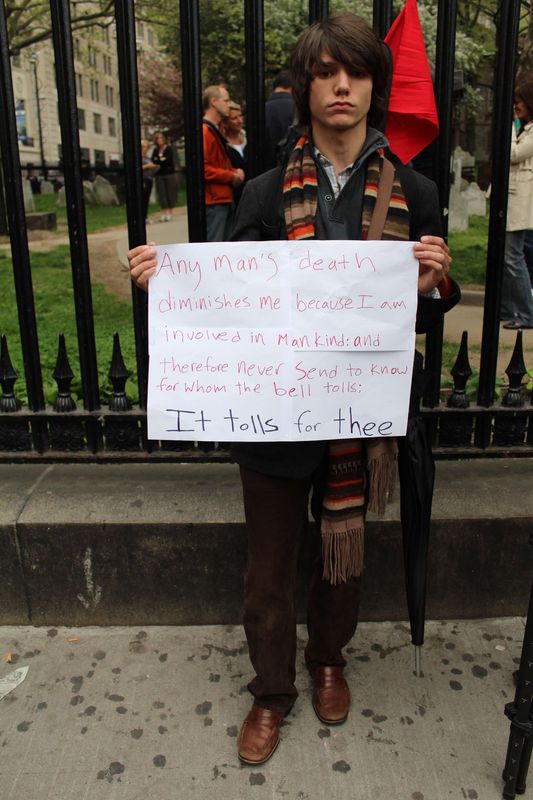