Of all the sweet, sweet ironies of Barack Obama’s historic victory -- aside from the real President Sarkozy's speedy congratulations on his "brilliant win" -- consider the fact that he won Virginia, where people queued for up to seven hours to vote. It’s sweet not just because VA hasn’t voted Democrat since Obama was four years old. Nor because it’s the state that has produced the largest number of Presidents. What’s beautiful is that it is a state in which Obama’s very existence would have been illegal when he was born, and for another eight years thereafter. Until the Supreme Court ruled, in the excellently named Loving v. Virginia, that interracial marriage was not a crime, but a constitutional right.

I’m loving it. Cost per presidential vote? $8 Winning a state that, in your lifetime, defined your parents as criminals and you as a legal impossibility, a non-entity, a bastard? Priceless.

Which is why the Prop 8 outcome in California is doubly shocking. We can only hope that California comes around on the question of marriage rights for all, or (imagine it!) is obliged to come around by an Obamafied Supreme Court. You can keep your conservative "strict constructionists": I’d love to see a decent set of judges apply the letter and spirit of the constitution to gay Americans.

Alternatively, as Salon's Glenn Greenwald suggests, a Democratic house could choose to pre-emptively overturn the federal Defense of Marriage Act. All in good time, yes; patience is all, and change doesn’t happen overnight, I know. But sometimes history needs a kick up the bum, eh?

For one thing, it gave the dead-tree newspaper biz a shot in the arm. I couldn’t get hold of a copy of the New York Times on Wednesday – first time that’s happened since 9/12. This was the only newsstand I passed that wasn’t sold out by mid morning. 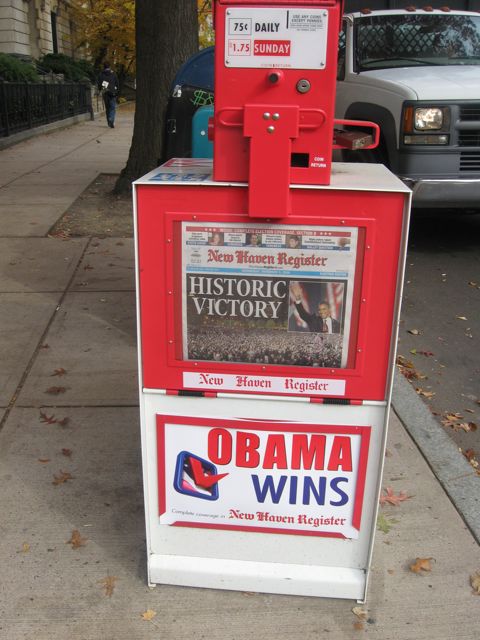 But less flippantly, this victory has really changed the way America feels, to Americans and unAmericans alike. To paraphrase Michelle Obama, for the first time in my adult life, I’m almost proud enough to call this my country. Citizenship is something I’ve never seriously considered, despite having lived here for thirteen years. But now I can see it.

On the night of the election, I wished I was still living in New York. It would have been so wonderful to go down into the streets, among the people, and feel the change. Instead, we drove home from a small but ebullient party, through the dark and silent streets of New Haven, our exhausted kids falling asleep in the back seat. The silent streets were a good thing; I imagine a McCain win would have brought many unhappy citizens out into the streets to express an impotent anger.

The next morning, I walked downtown to get the temperature of the town. Life as usual, but a few unbidden grins summoned up by signs left over from the campaigns; and the man selling Obama 08 buttons was still plying his trade.

At the post office, fumbling for the right money, I apologized for being a bit slow on account of having stayed up to watch Obama’s acceptance speech. The woman behind the counter – grandmotherly, African-American – lit up. “You and me both,” she said. We agreed it was worth it. “This is a great day,” she said, and in words that have become a refrain for so many, “I never thought I would live to see this day. I never thought it could happen in my lifetime.” She had cried at the announcement. So had I, and several of the people in the room with me. The kids from sheer exhaustion and delirium, the adults from ... well, what, exactly?

Back in graduate school, I took a class in which we read Toni Morrison’s Beloved, a harrowing, powerful, strange and difficult novel about unspeakable things. Some students confessed that the book had made them cry. And the professor, a powerfully regal person of considerable mana, whose teaching method involved long silences broken only by oracular pronouncements, embarked on a silence even longer and more forbidding than usual. Then she quietly asked - and I’m working from memory here - what is the value of those tears? When a book about slavery makes white people cry, how does that help? Whom does that help?

It was uncomfortable, but she was onto something. Cathartic tears of apology and regret may be genuine, and yet still be cheap.

But I think the tears for Obama’s win -- and they were shed worldwide by many different kinds of people -- were of a different quality: a mixture of relief and shame (that it took so long) and joy. Unfettered joy. Not just for a dream delivered after centuries of deferral, but for a promise fulfilled, a self-evident truth recognized.

(Q: Would we have cried, would so many have been so moved, had a woman been the candidate and the winner? I’m thinking not, and I’m not sure why. I’m also a little dismayed at myself for putting this question in parentheses; feel free to tease it out a bit more in the discussion thread).

Election day itself was sweet. I spent it with the boys, at the ballots, running a cake stall for the PTA. Since I can’t vote, I went balls out on the cupcakes. No campaigning within 75 feet of a polling booth, by law, so I ditched the plan to write “Yes We Can” and went with this: 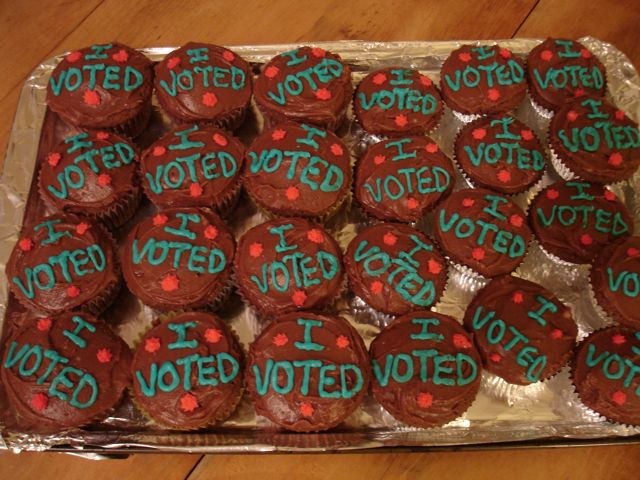 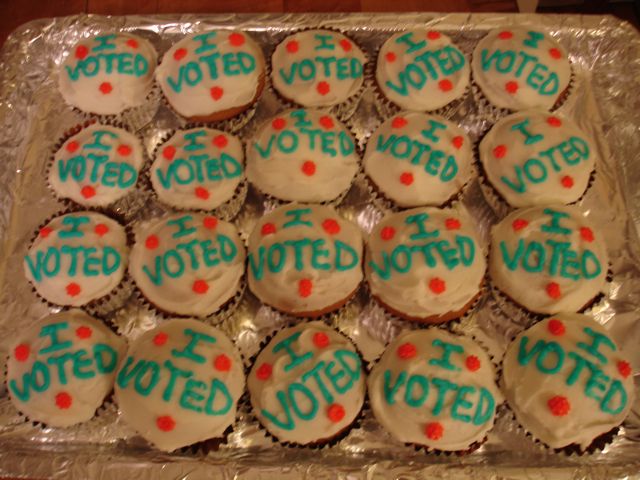 Chocolate and vanilla, you’ll note. They sold out, at a dollar a pop. (Hard work, though! I did another couple of dozen for the party that night, got about six Yes We Cans into it, and suddenly realized No, I Can’t. The rest just got red white and blue blobs.)

Speaking of chocolate, there’s been a lot of singing going on; plenty of Presidential playlists, Sam Cooke, classic spirituals... all good stuff, but the song that I can’t get out of my head is so very very wrong.

And yet so very right in many ways, not least because this is a president whose wife calls him Baby. “How’d ya know I needed you so badly/ How’d ya know I’d give my heart so gladly?”

I’d also like to salute the first Hawaiian president. Aloha! Obama’s perspective on Native Americans and Native Hawai’ians hasn’t had a lot of mainstream coverage, although it’s been followed closely across the Fourth World. (YouTube of his most significant campaign speech on the matter here). Looks like we’ll see indigenous issues on the presidential agenda for the first time -- as one blogger noted, the words “My Indian Policy” have not been known to pass GWB's lips. By the way, Obama was apparently the first presidential candidate to campaign on a reservation since Robert Kennedy - wow.

Meanwhile, over in the McCain-Palin camp, the debriefing, or should we say downtrou-ing, has begun. McCain’s concession speech was a good start, a decent if belated attempt to soothe his riled-up base and forestall a rash of cross-burnings. His crowd did not play well on television, coming across as mean-spirited, bellowing, and belligerent. I’d have liked to see McCain pause at the first interjection to demand respect for his words and their meaning. His speech was, on the whole, a class act and a bit of a surprise. Who was that unmasked man?

But I was watching Sarah Palin, who looked bitterly disappointed, God having refused her last minute prayers for victory. Also, too, the campaign having refused her request to make a speech. (Hello, lady? Not your job.) This might be schadenfreude talking, but to my eyes she wore the glassy-eyed, angry smile of the beauty-pageant runner-up, smiling and waving while checking that she didn’t have lipstick on her teeth, and all the while furiously wondering how her rival had gained the crucial edge – was it in the swimsuit parade or the talent pageant? (Clue: d’ya it might have been the question section?).

Do we feel sorry for her? As the horrific extent of her unsuitability for the job unfolds, she very predictably becomes the scapegoat for the campaign's own mistakes (although, seriously, Africa?? There's being the designated whipping boy, and then there's having whipped cream between your ears).

And now she has to negotiate her return to the wilds of Alaska -- which has just nuttily re-elected a convicted felon -- with her original reputation as bipartisan bridge-builder somewhat under strain.

This has been a campaign of many stories and complex narratives; in a literary mood, I’m thinking that, given their spectacularly failed attempt to fashion a perfect running-mate for McCain out of spare parts, the GoP might usefully revisit Mary Shelley's classic novel of hubris, Frankenstein.

Here is Victor Frankenstein confronting with his creation when it finally goes, as they say, live (and eventually rogue):

“How can I describe my emotions at this catastrophe, or how delineate the wretch whom with such infinite pains and care I had endeavoured to form? His limbs were in proportion, and I had selected his features as beautiful. Beautiful! - Great God! [...] For this I had deprived myself of rest and health. I had desired it with an ardour that far exceeded moderation; but now that I had finished, the beauty of the dream vanished, and breathless horror and disgust filled my heart.”

Can it be a coincidence that, in the book, the distraught "monster" is last seen stalking across the frozen Arctic wastes, albeit not in outrageously expensive campaign-funded spike-heeled boots?