She did go out in time for the Sunday headlines. Her body was discovered at 11.15am on Saturday in her Finger Wharf apartment in Wooloomooloo, a respectable time as far as media coverage was concerned. The death of Charlotte Dawson would front the Saturday evening TV news, with that lead-time to gather the all-important file footage and comment. And she’d headline the Sunday tabloids throughout Australasia.

It wasn’t that she hadn’t tried suicide before. There had been a recent attempt which had ended up in hospitalisation, and there had been others. But this one was different. This one was by hanging. It wasn’t the ‘go-to-sleep-permanently-and-still-look-good’ produced by the sleepies in the pharmaceutical cabinet. In fact, it would be awful and ugly. But maybe that is was it was supposed to be.

‘Thing is when we all reach out with love, he rebels,’ is the last line of the second-last text she ever sent me. She was commenting on someone else, but she could have been talking about herself. She was good at giving love – generally – but being reached by love was another story.

‘I’m wrong, just wrong,’ she said on other occasions. It was something she deeply and fundamentally believed. Beneath all the impossible beauty, the alleged glamour, the public lifestyle, Charlotte Dawson thought she was ‘wrong’.

I’ve known – had known, I’m still getting my tenses right – CD for more than ten years. I called her CD as she called me DH. With journalist Jonathan Marshall, JM, we made a troika, three of a kind. It was a decade of laughter, respect, company, and occasional fury. We were all hard management. None of us was exactly easy. We all had low boredom thresholds. 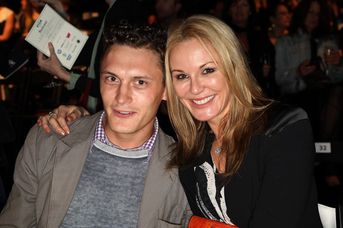 We all first became fast and permanent friends when CD was at one of her many career lows in the very early 2000s – the cancellation of TV shows, the scarcity of modelling work, the drying up of income. I liked CD a lot. I liked her anarchic humour. I liked her intelligence. I liked her looks. She was perceptive. She was fun to be with. She taught me lots about fame and fortune. She taught me things about duty.

I looked at her sometime after midnight at a 2013 New Year’s Eve party for 100 or so people at her Wharf apartment, and said ‘Jesus, we’ve got another eight hours of this’. ‘I know,’ she replied. I’d been doing clean-up duty, really, sorting the shit as it happened, making sure the party went off OK. JM was being the party. CD was being graceful, making sure everyone got a little celebrity charm. ‘I’m fucking exhausted,’ she said. But she was still charming the world at 6am. I guess this is what I want to say. CD had a knack of bestowing grace. I used to really love it when the eyes of small children in malls lit up because they recognised her. She was so infinitely patient with them and with people in public in general. She’d always talk to them and you could see the energy and charm she granted. She bestowed celebrity grace on the people that asked for it. It was an odd laying-on of hands, but it worked.

CD was a woman who had made herself in many ways. She always told me that she had been an ugly adolescent. I don’t know. I never got to see a photograph of her from that time. Later on in life, and she was always frank about this, she had ‘work’ done. She had one Sydney plastic surgeon, a Chinese doctor, who did procedures free because she was happy to recommend him, and there were others with exactly the same deal - and exactly the same requirements of post-op publicity.

CD could get out of bed in the morning, throw some water on her face, and look great. There were frequent fiddles with botox and her lips could look bee-stung at times, but generally the basis on which she worked had been pretty good in the first place. Good bone structure. She generally worked out at gyms. She ate well – though she was definitely a meat-eater.

How you see all of this is dependent on your own life philosophy. CD was making herself for other people, and particularly males, or the generalised ‘male gaze’, thus the tits. Unfortunately in CD’s case, they were males I did not think worth it. I never really figured out her taste. There were the sportsmen, the players, and the business-success wankers, but in general, I felt, they were using her for her status as she used them for the appearance of a relationship and confirmation of public desirability. ‘I’m going to have to fuck him,’ she said grimly one night about someone, and her saying it was as glum as it reads.

In general, her males were being granted a high-performance individual, with an acute mind. Mostly, they had no idea what they were receiving. In an era when sportsmen are cultural heroes, unfortunately a high-profile woman is going to get stuck with a lot of really dumb male flesh. She did. She was a notch on a belt and a locker-room boast. Her need to do this to herself didn’t work for me.

CD could drink. Her preferred drink was chardonnay. ‘Chard’, she'd call it – ‘a nice buttery chard’ for preference. Sometimes it was way more than a tipple. She had a fondness for repeat screenings of movies and always had favourite scenes. Then she’d curl up on the sofa with her phone, glasses perched on the end of her nose, a bottle of chard, and, too often, twitter.

I could never feel her fascination for twitter. You open yourself to the public, and frequently not in a pleasant way. The human audience can be a terrible thing and hasn’t changed much from Roman crowds baying for blood. The combination of twitter and alcohol was not a good one, simply because it made her vulnerable and she took twitter seriously. I’m not saying she didn’t give as good as she got, but she was opening herself without filter to the often vile bigoted mess of humanity.

CD was also at a crossways in her life. She felt herself to be old – ‘old, old, old’ was one reiteration I remember as she watched a clip of herself on TV. And all the social valuations were coming home to roost, and not in a good way. She had lost her Foxtel contract with its retainer which had been a foundation for her life for 7 or 8 years. Then she had always treated her rented apartment as a refuge, but the owners were looking at selling it. Her body was discovered by a real estate agent with buyers waiting outside the door

In many ways, it was a perfect storm. But it had one consequence, CD is dead and I miss her.

Often late at night, last-track-before-bed stuff, she’d play favourite music on the stereo, and her all-time favourite track was a world away from authorised choices or what you'd expect. The track was from the punk band, Proud Scum, on the AK79 compilation: ‘I Am A Rabbit’. She knew all the words and she'd sing along.

"Well I've been called a dope before
Say I'm not sexy anymore for you
Say I am an animal
Say I'm not a man at all, it's true!"

She’d stand up in the middle of the lounge while I sprawled on the couch. She’d dance to Proud Scum and she looked like a little girl: that hair sweeping in the air, her body a mass of compact taut energy. I’d laugh because it was my own much-valued CD and shared time with her that only her and I could understand.