Let me be frank about something that will probably shortly become obvious anyway: I have something of a crush on the Electoral Commission. Recently, they released their report into the 2014 election. I spent an afternoon reading it and tweeting about it, and about three days boring people solid talking about it. Luckily for you, I have a blog.

The major area to be addressed, of course, is declining voter participation. This isn't a trend unique to New Zealand, as this graph makes clear. 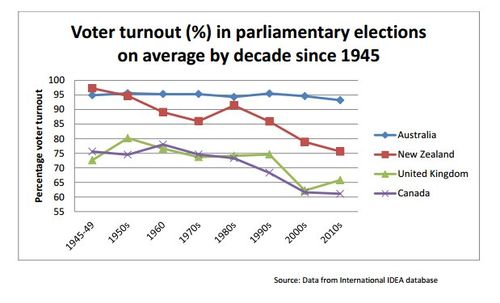 You might also think that graph says something about compulsory voting, but that's not mentioned at all in the review. Participation in 2014 was up slightly on 2011, which is encouraging. However, the number of eligible people not enrolled to vote is estimated at 250,700, up from 147,200 in 2008. The groups least likely to enrol and/or vote are Pasifika, Asian, and young people.

The problem with young people's engagement turns out to be a bit more complex, and a bigger problem, than you might have thought. It's not that 18-25 year olds don't vote. It's that they don't vote, and when they're 25-30 year olds they still don't vote, and when they're 30-35 year olds, they keep on not voting. They establish a pattern of not voting, and carry it through their lives. Meanwhile, new groups of non-voting young people keep coming along, and the percentage of the population voting goes down, and down, and down...

The report mentions a number of things the Commission has already done to try to encourage people to vote. This includes a Kids Voting program, which apparently ran in 556 schools. I found this a bit disappointing, because in my frequently-expressed-while-drinking opinion, civics education was the key. Get young people excited about being able to vote. Don't let that pattern of not-voting get established.

The Commission has no specific recommendations for future new action on this problem, past stating it requires a "whole of government approach". Still, this is the first election that the Commission have been actively involved in motivational messaging as well as informational, and perhaps the pay-off is still to come.

The main reasons non-voters gave for not voting in post-election surveys were: “lack of interest in voting” (27%), other personal reasons such as health and religious reasons or being away from home (22%); “didn’t know who to vote for” (11%); and “other commitments” (10%). Only 3% gave a reason of not knowing how, when or where to vote. Only 2% said it was because the voting place was too far away and they did not have transport. This indicates that it is less about institutional barriers and more about lack of interest or motivation to vote and the need to encourage people to value their vote.

There are many other smaller points of significant note in the review. You know that thing where people can vote for weeks before the election, but advertising is only restricted on election day? They've noticed how weird that is, and would like it looked at. The number of people advance voting is now so high (29%) that the whole way we run and regulate elections needs to be reviewed. For instance, under current law, scrutineers are banned from, say, wearing t-shirts with "Vote [Party]" slogans on them on election day, but not in advance polling booths before election day. Nor are there any restrictions on how close to advance voting booths campaigning is allowed. Discussing this is one of the many, many places the Commission has noticeably not used the phrase "this is fucking stupid".

The Commission would also like the laws on Treating, and on election advertising and satire, reviewed. " The application of these provisions raises difficult issues regarding freedom of expression." They would like to change the way parties are allocated funding for opening and closing addresses, as (to paraphrase) no fucker watches them, and the money could probably be better spent on some Facebook ads or something.

The section on voter expectations is an example of why I find the Commission so fabulous they're probably brunette and have an opinion on the Oxford comma. It's not about changing voters' expectations, it's about how they can meet them.

Also, given growing concerns about privacy, is there any particular reason we publish electoral rolls and make them available for purchase? Some people who don't meet the threshold for the unpublished roll don't enrol because they don't want their details made public. " The Commission recommends that electoral rolls (and habitation indexes) no longer be available for general sale, that the inspection of rolls should be limited to offices of the Commission, and that house/flat/apartment number and occupation information should no longer be included in rolls available for inspection."

The Commission believes that people should be able to change from the General to the Maori roll every electoral cycle, and that this option could be offered when packs are sent out for people to check their enrolment details. The delay in the last Census made the restriction on changing rolls worse than usual, but even under normal circumstances, is there really any justification for it?

" The Government has indicated that e-voting for parliamentary elections will not be a priority for 2017." So the Commission, while noting they will study overseas developments, has not considered electronic voting.

Nonetheless, something interesting has happened with overseas voting. The Commission noted that in 2011, overseas voting had dropped significantly because, and I shit you not, people were having trouble accessing the requisite fax machines.

So now, if you're overseas and not voting from somewhere like the Embassy in London, you can download a ballot paper, print it out, fill it in, scan it, and upload it. The Commission reported no security issues with this system, used by over 22 000 people, and few technical issues not caused by a Browser Which Shall Remain Nameless.

This column is getting too long for reading, and I haven't even touched on the Commission's award-winning work on providing secret voting for visually-impaired people. I can only touch on the substance of the report: you guys get in there, dig stuff out, and let's talk. I'm off to find out what the Electoral Commission's favourite martini style is, because I bet they have one.