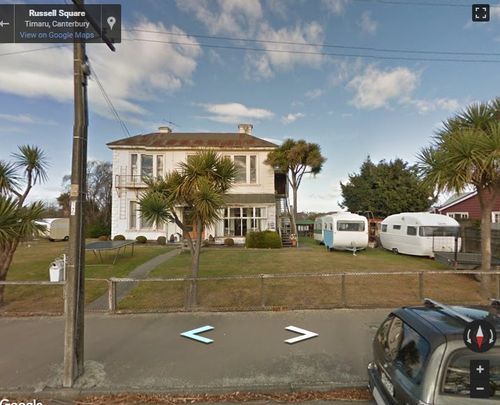 This is a house in Russell Square, Timaru. My family lived in the upstairs flat when I was four and five. I am terrified of this house.

I went back to it once, when I was sixteen. I’d been up that end of town because I had a hospital appointment, and it was either wander around aimlessly or go back to school. I was sixteen and kind of self-absorbed, so I saw no problem with going through the gate and looking around the outside. I went around the back to pick out my bedroom window – it had stained glass along the edges. Then I left, and never told anyone I’d been there.

That rickety wooden staircase up the outside, sometimes I wonder if it’s the reason I’m scared of heights. I wasn’t when I was little, I can remember that. Now, stairs with no risers are the absolute worst. I’m not scared of falling, it’s not that logical. I’m scared of being up high.

Maybe it’s because, when I was four, I saw my dad beat one of my brothers down those stairs.

A long time after I left home for uni, one of my brothers bought a house nearby. Sitting on their porch, you could see the roof of the Russell Square house in the not-enough distance. It cast a shadow on my heart.

There are no feelings with those memories, just dark holes where feelings should be. But I am terrified of that house.

Earlier this year, the process of preparing to have new carpet laid led to me realising, for the first time, that my father killed himself. Nobody told me at the time, which was probably the right thing to not do.

There has been a photograph of my father on my desk since Fathers’ Day. I went looking, because I didn’t know if I had one. He’s sitting in the sea, holding me upright in the water. He’s looking at me, with adoration. I’m looking at Mum, who is holding the camera. There are no feelings there, either.

My father was treated, unsuccessfully, for his alcohol addiction several times. He was never, so far as I know, treated for his violence, his abusiveness, the sense of entitlement that underlay it all. I wish he had got help. I wish the people who enabled him had actually helped him. I wish people asked, “Why did your father do that? How could he do that?” and not “Why didn’t your mother leave sooner? How could she put you through that?”

The new family violence initiatives are a good start. I hope they come with a change of culture. There’s not much point, for instance, in issuing more protections orders, and having more people able to ask for them, if they’re not going to be enforced. To prevent and heal the damage caused by domestic abuse requires funding to sectors who’ve lost it: counselling, community organisations, refuges. Victims need to be able to afford to leave abusers, and have somewhere to live when they do. It’s good that someone can have specific domestic violence charges on their record, but that doesn’t keep their future partners safe. The only way to do that is for the perpetrators to change.

And they should want to. My father adored me. I never loved him. I can never forgive him. It is forty years later, and I am still terrified of a house.