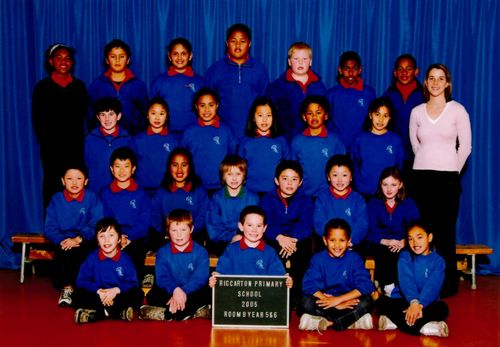 This is one of my kids' class photos from primary school. You may notice that everyone is dressed the same. I'm not big on uniform, as you may know, but if a school has to have one, this is a good model. Track pants, polo shirt, sweatshirt. It was cheap, a big factor at a Decile 3 school. It was practical, easy to move around in, didn't require a separate sport uniform, and accommodated the needs of the school's Muslim families.

It was also gender-neutral.

I'm not sure why the suggestion on uniforms has been plucked out of the Ministry of Education's new sexuality education guidelines as the hot issue. I'm even less sure why people thought we should care what Bob McCoskrie thought about it. It's a perfectly easy and reasonable thing to do. You don't say "girls can wear trousers and boys can wear skirts", you just have one uniform, with trousers, which are unisex wear in most cultures. Then you can stop worrying about how short the girls' skirts are, and girls can bike to school without getting their ridiculous box-pleated kilts caught in their wheels.

The underlying premise of the new guidelines is that all students, of whatever gender or sexual identity, should feel safe at school. They're about removing discrimination from school practices. We stop pretending that we don't have gay, bi, lesbian, trans* and intersex kids in our schools, and start protecting them.

Of 8000 New Zealand secondary students questioned, 1.2% identified as trans*, and 2.5& as 'unsure'. Even if you take a low '1 in 100' rate of trans* pupils, that means the odds are there are a couple in every state school. It's not ridiculous to accommodate them, it's ridiculous to go on pretending they don't exist.

The MinEdu guidelines think it would be a good idea if they had somewhere safe to go to the toilet.

The section on 'whole of school engagement', which appears to be the only page many reporters have had time to read, recommends:

- sports procedures and practices should allow participation of all students, regardless of gender or sexual identity. They should combat bullying. All extra-curricular activities should be open to all students.

- bullying involving gendered or homophobic slurs should be recorded specifically and separately and monitored.

The suggested changes to uniform code seem to be the least controversial of those proposals. Consider the impact of those changes to sport practices. (At my co-ed high school, we were never divided by gender for PE, but we played soccer, hockey and volleyball, never rugby, cricket, or netball.)

The really scary stuff is right in the curriculum.

All young people need access to information and opportunities to think about, question, and discuss issues related to relationships, gender, sexual identities, sexual orientation, sexual behaviour, sexual and reproductive health, and societal messages. Sexuality education provides a framework in which this can happen.

This is not 'how to not make babies'. For instance, at Years 4-6 (upper primary school):

They will describe how social messages and stereotypes about relationships, sexuality, and gender affect well-being, and will actively affirm the rights of themselves and others. They will identify risks and issues in online and social media environments and question messages related to gender, sexuality, and diversity.

This is not so much "but a 'boy' might wear a skirt!" as "We may teach your nine year old to smash the patriarchy, okay?" Imagine, trendy lefty liberals, sending your kids to school and not having them coming home with a whole bunch of gender-conforming sexist bullshit.

Programmes will affirm sexual diversity and gender identity. Students will learn about the physical and emotional effects of sexual identity, sexual attraction, and sexual maturation. Students will critique dominant cultural messages about sexual behaviour (including those in mass and online media) and identify skills for positive and supportive intimate relationships. Human rights, consent, and the importance of choice and agency in relationships will be discussed.

I could go on, or I could let those of you who care read the report yourselves. There's only one place where I have a serious problem with this whole thing: it's not compulsory. The schools who will do this will be the schools who would do it anyway.

Schools are required to consult with their 'communities' about sexuality education every two years. Consultation isn't defined, in terms of form or duration. The report does note that consultation does not require agreement, and that parents can opt their children out of sexuality classes. (It's opt-out, not opt-in.) It's the school's job to find a way of balancing the curriculum with the 'values' of their community. It's just as well it's not my job, because I would always say, "The rights of the students to safety, respect, and quality information are paramount. Suck it."