Shenzhen is a city with about twice the population of New Zealand. Forty years ago it virtually didn't exist.

Back then, it was a market town of 30,000 on China's border with Hong Kong. Now, it's new, it's growing fast and – with its authorities worried about pollution and infrastructure – it's opening a new subway line or two every year. Electric vehicles are everywhere, buses, taxis (petrol-powered taxi rides pay an extra tax), the ubiquitous blue electric cargo trikes.

Most importantly, the city banned two-stroke motorbikes and scooters, replacing them with electric bikes and scooters, everywhere. At night time you continually have to dodge the scooters coming up behind you silently without lights (more range).

Shenzhen is where a large chunk of the world's electronics comes from. Chances are, you have something that was made here, especially if you bought it cheap on AliExpress or eBay

People flock here from all over the world to build electronics - if you win a Kickstarter, try to raise $10k, and instead raise $10m, and have that "oh shit! what do I do now?" moment, you move to Shenzhen. There's a Kiwi bar, CraftHead, where the hipster hardware hackers hang out, started by a couple of kiwis from Timaru and Dunedin. The house beer, Kia Kaha, is brewed with hops imported from back home.

So what's the latest biggest hi-tech thing in Shenzhen – in fact in China –this month? Bikes! Or rather a sort of cross between Uber and Amsterdam's yellow bikes. 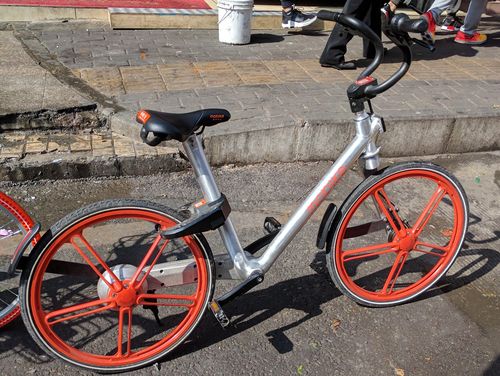 When I was here two months ago short term rental bikes were starting to show up on the streets, with just one or two companies renting them. Now, there are almost 10 different sorts, each with its own distinctive colour. Here's a random pic from the street outside my hotel this morning: 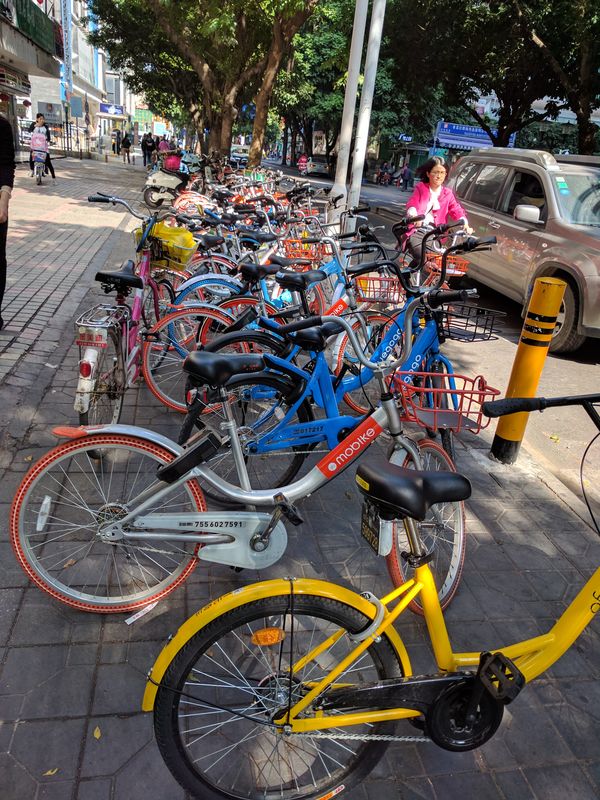 I think I counted five different company's bikes in that lineup – from the front Ofo (yellow), Mobike (orange/silver), Bluegogo (blue), XiaoMing (light blue). Amid the crowd of companies competing to own this business the clear leaders at this point seem to be Mobike and Ofo.

The best part is that people are using them, lots and lots of them, everywhere, all over China

So how does it work? Let's take Mobike. You start by downloading their app (everyone here in China has a smartphone, forget about ATM cards, you pay at the store by having the cashier scan a QR code in WeChat), and pay a one time 300 kwai (~$60) deposit. The original Mobike (see the pic above) with the distinctive orange spokes, can be rented for one kwai for half an hour (~20c).

Mobikes have a GPS and a cellphone transceiver, both powered by a generator in the wheel hub. The app will help you find a bike – you can even reserve it for a short while. When you arrive at the bike, you scan its QR code, unlocks it (using Bluetooth) and off you go. When you're done, park the bike legally on the footpath, pull the lock on the bike, and walk away.

Mobike have sort of gamified the app: you get points for renting a bike, for signing up friends and for reporting broken bikes – and you lose points for forgetting to lock it or for leaving it somewhere not in a public space. (You even lose a whole lot of points for "abandoning the bike while being chased by the police"!) The app will also measure how far you've biked, how many calories you've burned, even show you (creepily) GPS tracks of where you've biked in the past.

The next biggest competitor is Ofo, which has a much more lo-tech solution. There are no electronics in the bike itsef and when you rent it, the app simply tells you the number of the bike's combination lock. Kids seem to prefer these, they're cheaper, only 100 kwai deposit ($20) and 0.5 kwai per half hour (10c).

Mobike has responded with MobikeLite, which also costs 0.5 kwai per half hour to hire. It's not quite as distinctive as the signature bike, but more practical. It has a carrier basket and instead of an inhub charger the electronics are powered from solar cells in the bottom of the basket. Finally, they have non-pneumatic tires (look at all the holes in tires the second picture above).

When I walked back to my hotel this evening, maybe two thirds of the bikes being ridden were rentals. So far they've only been released in the big Chinese cities, but even that that means that someone, somewhere can make tens of millions of cheap bikes suddenly on demand.

There are some downsides. Signs are popping up telling people where they can't park their bikes. And out the back of Huaqiangbei, the giant electronics market a few blocks from here, a giant tangle of bikes seems to form every day. Vendors with street-facing storefronts are simply pushing them into the street out of frustration. There are reports of competitors locking up or vandalising each others bikes.

China has some things going for it that make this work: dense cities, a multi-generational bike culture - a generation and a bit ago there were only bikes – and very low public vandalism. In cities like Shenzhen there's a large itinerant labour force, many of who may go home to their rural village for New Year and go try their luck somewhere else next year. The cost of owning a bike and getting it on the train would be too much for them.

Would it would work in, say, Auckland? I don't know. The sprawl works against it and the dearth of public places to actually leave a bike probably makes it way too inconvenient. But these same Chinese companies are already planning on doing NY, LA and San Francisco.