The hand-coloured photos of Whites Aviation have become celebrated icons of New Zealand’s mid-century culture – but the story of how each photograph was individually coloured by hand has been almost lost. That's the story Greg Wood and I sought to tell in The Colourist, which is part of this year's Loading Docs film festival.

The film highlights the vocational alchemy and the love of creating a hand-coloured New Zealand. The depth of friendship amongst the ‘colouring girls’ was so great they even went on holidays together. One of them, Grace Rawson, even planned  her honeymoon to visit the locations of Whites Aviation scenes. 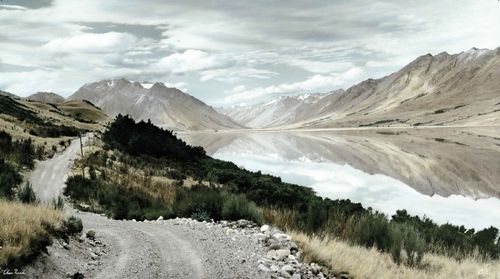 The idea was this: could Grace Rawson, at a spritely 83 years of age, have another go at hand-colouring a photograph, 53 years after giving up the craft when she left Whites Aviation? 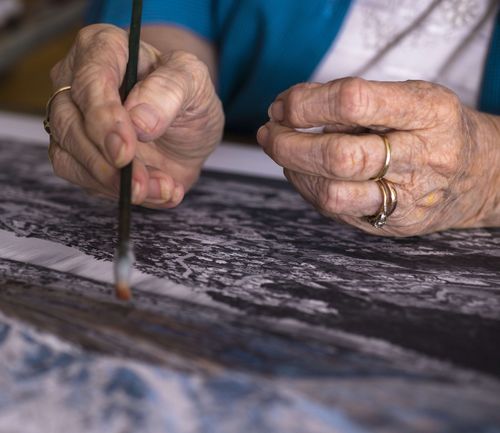 Grace at work in The Colourist with her cotton wool brush. Photo courtesy Samuel Montgomery.

To fully understand the story, let’s wind back the clock.

In 1963, a rare behind-the-scenes account was published of life in the colouring studio of Whites Aviation, showing the studio as a well-lit room in Darby’s Buildings on the corner of Darby and Elliot Streets in downtown Auckland. Inside, a group of about eight women loved their work; using cotton wool to create the best-known examples, then and now, of hand-coloured photography in New Zealand.

Interestingly, the article didn’t appear in a photography magazine or any publication related to art or design. Instead, the article graced the pages of none other than the Women’s Weekly. It was a good fit; all the members of the colouring studio were women, as they were through time, and the hand-colouring craze was on a public high.

The article was matter-of-factly titled ‘Steady Hand, Keen Eye and a Retentive Memory Needed for Tinting’. In the art paradigms of the day, these women weren’t "artists" and nor, for that matter, were those who took the photos. But the women were devoted to their art form, proud of their achievements and immensely happy in their work. 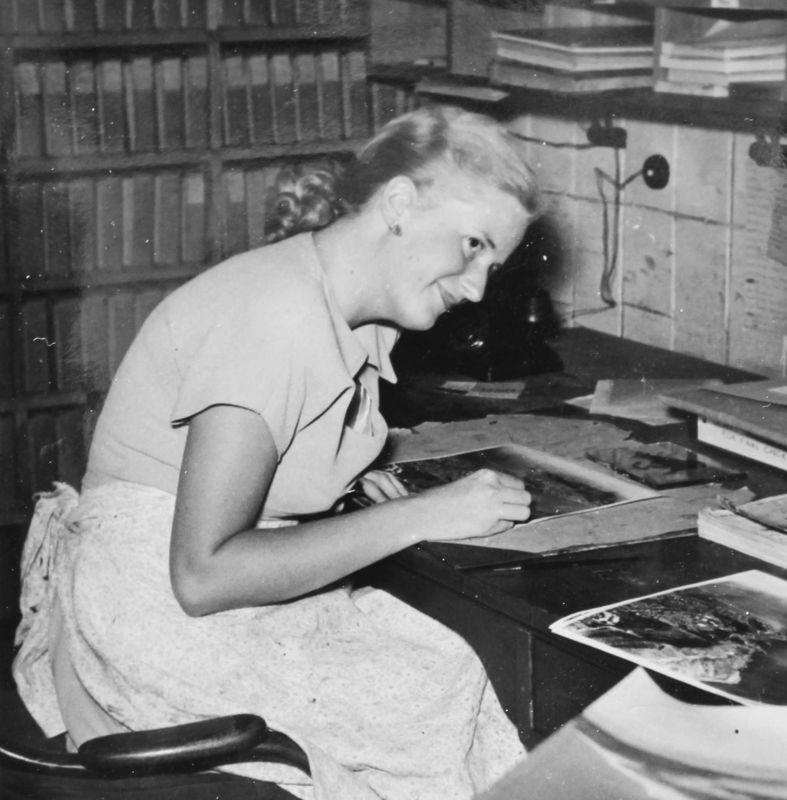 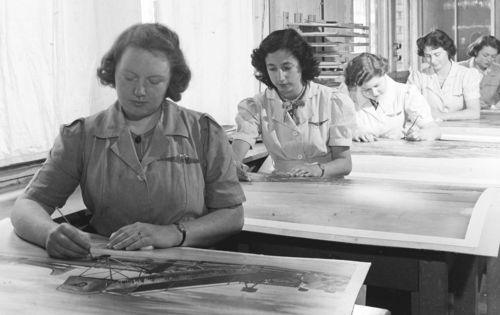 The article provided insight into the delicate and intricate nature of the craft:

The sea was washed with blue, highlights were added in green and a darker blue. Rangitoto was a combination of green and mauve for the base and blue and mauve at the top. Highlights were of raw sienna. The yachts were mainly scraped up with shadows on the sails and the hulls brown. The tree in the foreground was washed with a darkish green with the highlights of a paler tone of the same colour. The flowers were done last … For bush, four shades of green were used, several tones of yellow, browns and pinks.

One gets the picture that it was complex work but, like most hard things, made to look easy by people at the top of their game. 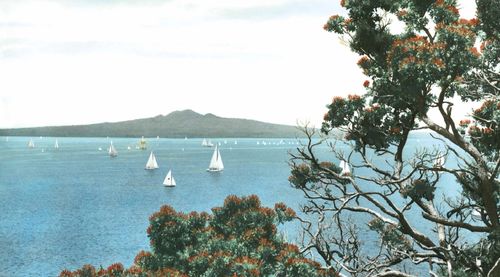 Grace was born in Auckland in 1933. At the age of three, she was asked that quintessential childhood question: "what do you want to be when you grow up?" Her answer was as unusual then as it would be today: "I will be an artist!"

Grace’s artistic vocation would soon become even clearer. Aged four, she was a flower girl and looked after by the bridesmaid who hand coloured a photo of Grace in her pretty wedding dress. In reflecting on that time, Grace said she ‘understood right then that there was a branch of art that maybe was possible later’. 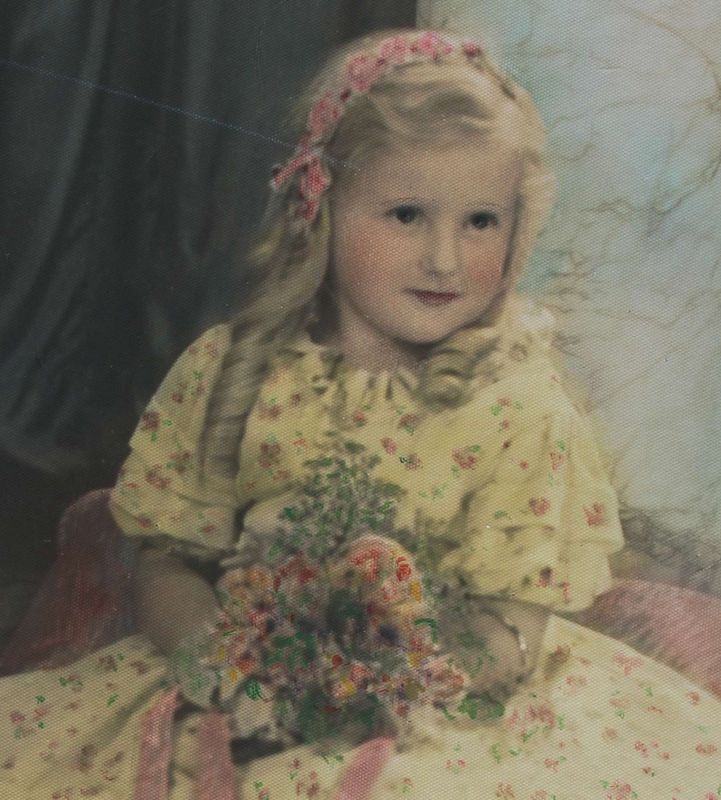 Grace as a young bridesmaid, when she recalls getting her interest in hand-colouring. Photo courtesy Grace Rawson.

Later, like many of Epsom Grammar girls, Grace was hand-coloured in her ball gown; her photo worked on by Crown Studios opposite Smith & Caughey. The photo was displayed in Crown's front window – and it was the final inspiration for Grace to apply for a colouring job. For £1 10s a week, Grace was taught by Shirley Davies, a real hard-case character, and quickly fell in love with painting portraits and groups. 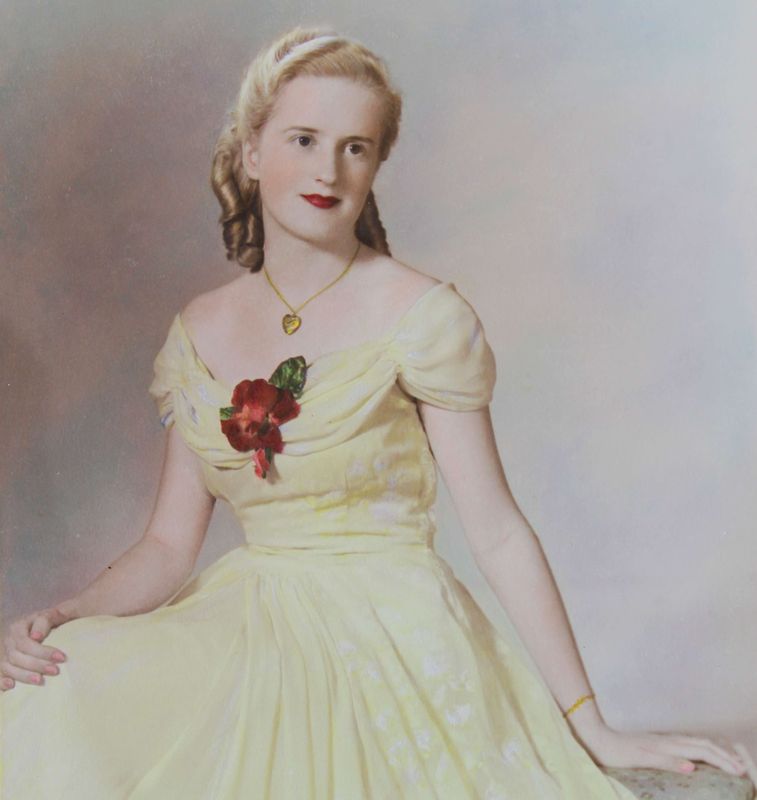 A portrait of Grace hand-coloured by Grace herself. Photo by Auckland’s Crown Studios.

After a trip to England, where her hand-colouring continued, Grace returned in late 1953 and heard of the growing reputation of Whites Aviation. She recalls meeting Leo White like it was yesterday.

Despite showing White her British portfolio – old mills, bridges and thatched roofs – Grace was also asked to paint some of White’s own photos to further prove her worth. Clyde Stewart (or "Mr Stewart" to Grace) was her manager. Stewart ran the colouring studio for 37 years and signed out each and every photo with the flowing ‘Whites’ signature.

The photos were printed on a special semi-matte, fibre-based paper, striking just the right level of absorption to allow the colour to cure without bleeding. The photos were painted in oil, thinned with turpentine to allow the paint to be translucent, creating a wash-like effect. For application, paint brushes were only rarely used and, instead, a small amount of cotton wool was wrapped around the end of a thin grapevine to create the ‘brush’. Cotton wool had the advantage of being able to create a thin film of colour, and in a uniform, streak-free way.

A set of Winsor & Newton paints for hand-colouring photographs. A bottle of turpentine can be seen on the right of the tray, with cotton wool and sticks in the bottom to be used as the "brush".

For landscapes, Grace recalls Mr White describing the right colours, always ensuring clarity in the New Zealand light. The 1963 article also refers to photographers frequently bringing back samples, "such as the time Mr White returned from the South Island high country with a handful of tussock."

A photo about 35x50cm would take about one morning to colour. When the girls painted large murals, it wouldn’t be uncommon to work as a team, standing, sitting or climbing up on stools. Even then, big pieces could take many days to complete, nine in the case of a large Lake Taupo photograph worked on by four "girls" in 1963. 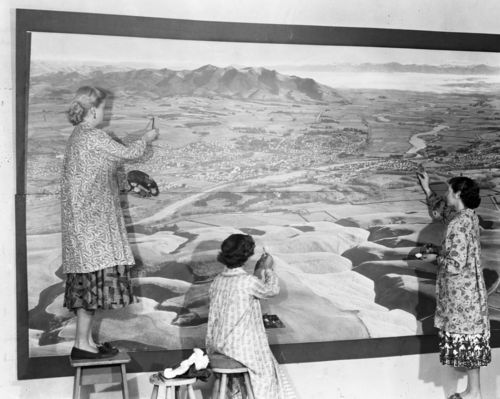 Grace Rawson, Lorraine Sutton and Nola Mann work on colouring a large photographic mural for H & J Smith’s store in Gore in 1955 (ATL, WA-39940). Large murals like this took a number of days for a team of colourists. Nola Mann worked as a colourist at Whites from around 1955 until around 1998, likely making her – given the popularity of Whites’ work – the most extensive hand-colourist in New Zealand’s history.

Speaking to us, Grace explained her theory on the Whites sensation and the orders that came in thick and fast:

"It was very important for people to have photographs of New Zealand on their walls in those days. And once Whites started selling, they went berserk everywhere. In my view, everybody bought them because there was nothing else like them at the time. There were some prints of Van Gogh’s sunflowers, Brugal’s paintings, Constable’s hay wain – but suddenly Whites was different. It was real, and the country we lived in,  and hand coloured. It absolutely took off."

One of the early hand-coloured ventures for Whites was also the capturing of farms, tapping into a strong sense of national pride in rural land.

"I love to come across the photos: a majestic mural of the Remarkables in a Queestown café and many in Replete café in Taupo."

All, it so happens, locations of special significance in Grace’s life. Wherever she goes, the popular Whites Aviation scenes are never far away  – not least among them, the photos that she coloured with her own hand. 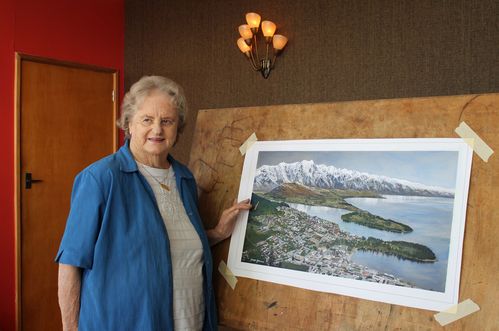 Grace with her completed hand-coloured photo of Queenstown created for The Colourist in 2016. Photo courtesy Peter Alsop.

Peter Alsop co-directed The Colourist with Auckland-based filmmaker Greg Wood. Loading Docs is funded by NZ On Air and made with the support of The New Zealand Film Commission.

Peter’s beautiful book on Whites Aviation, Hand-Coloured New Zealand, will be released in October (Potton & Burton, hard cover, 416 pages). A sampler of the book is viewable here. The book can be ordered now with an attractive pre-release discount: 20% off and free postage within New Zealand (Coupon code WHITES).