She leaned toward me, locked her blue eyes with mine, and whispered in the most intoxicating Irish accent...

"Clinton, I ran guns for the IRA."

With those six words I was hooked. What followed has circulated in my head for years.

Like many, I'd followed the violence and unrest in Northern Ireland on TV. Locals refer to this period as "the troubles," an understated way of describing what amounted to a civil war that still simmers to this day. On one side, the predominately Catholic nationalists believe the North should join a united, independent Ireland. Opposing them are the mainly Protestant loyalists who want Northern Ireland to remain as part of the United Kingdom.

In 1969 British troops were deployed to Northern Ireland, at first to protect civilians, but soon got entangled in fighting paramilitary groups such as the IRA. The whole thing devolved into a very ugly situation which killed 3,500 and injured over 50,000 in the decades that followed. Groups on both sides claimed they were acting for the good of the people, but in the end caused nothing but misery.

I was compelled to retrace my friend's steps, to travel the streets and explore the neighbourhoods she talked about with such fire. I wanted to meet the people on both sides of the "peace walls" — the seven metre high fences that separate loyalist suburbs from nationalist — and hopefully gain a more tangible understanding of this conflict.

At 6:00pm each night a guard swings a massive gate on its hinges to close off the throughway that connects the Falls and Shankill districts of Belfast. I turn to the man next to me and ask a rather naive question.

Why are they closing the street off?

"Ter stop dem killin' each other"

Officially the troubles ended in 1996 but 22 years on parts of Northern Ireland remain fiercely territorial. In Belfast's Shankill neighbourhood Union Jack flags hang from houses and portraits of a young Queen Elizabeth are posted everywhere.

On the other side of the security wall the imagery is in stark contrast. Not the Irish flag as one might expect, but murals of the Palestinian struggle, Nelson Mandela, and others. The nationalist community align their message with dispossessed people and stolen land as much as they do with the goal of a united Irish Republic. Just inches of steel and concrete separate communities with mindsets fixed miles apart.

The Irish woman and I shared an interest in alternative music. She was a Belfast punk in the '80s, I was a kiwi kid living a half world away. Although it would be decades before our paths would cross, we were unknowingly linked by a remarkable piece of vinyl.

At the height of the troubles the Irish band Stiff Little Fingers formed and released a blistering, politically-barbed, howl of a punk record. Their Inflammable Material album exhibited a raw energy and integrity that still resonates to this day.

They take away our freedom
In the name of liberty

Their solutions are our problems
They put up the wall
On each side, time and prime us
Make sure we get fuck all

During the '70s and '80s Belfast was plagued with car bombings and after 6:00pm the central city would be virtually shut down. The only people that ventured downtown were the police, the military, and punks going to the Pound club where SLF would play. Protestant and Catholic kids alike would unite and listen to protest music. Northern Ireland punks mostly rejected the narratives of both sides of the conflict.

They say they're a part of you
And that's not true, you know

In Hopewell Crescent fourteen year old Callum wheelies his bike past the Summer of ‘69 mural which ironically applies the Bryan Adams song to the riots that launched the troubles. The gable art depicts an iconic image of two children, one Protestant and one Catholic, who were friends one day and woke up the next in a bomb-ravaged neighborhood being told they could no longer play together.

Whole generations have grown up knowing nothing but social division. The massive steel and razor wire fences that snake their way through Belfast are indicative of the mistrust that still permeates these neighborhoods. Sectarian walls, it turns out, are much easier to build than tear down.

"They wanted this street, and they didn't get it, and they wrecked it in the process. I love my country, I love my culture, and that wall is stayin' where it is. Amen!" states a defiant loyalist.

Another man provides a more reasoned response "The walls have attracted more trouble than they prevented, they don't really give you the protection you think."

I'm driven to explore places with troubled histories, I'm not sure why. Perhaps it's their ultimate redemption that makes me feel positive about the world, how humanity can bootstrap back from very dark situations.

Today, many Northern Ireland communities are attempting to pull themselves away from sectarian conflict. Mural artists are starting to focus on less inflammatory subjects and a few security walls have been dismantled. Although positive steps are being made, they've still got a long road ahead.

"We need to get to a situation where there's no more barriers being built, not only that, the idea of a barrier is considered to be unacceptable."

Visiting a country that's endured such violent partisan division has been an eye opener. Once again I've had the privilege of peering into lives very different to my own, however this time I leave with a sense of unease. The Northern Ireland experience has really underscored the signs currently emerging from my adopted country which appears to be heading full throttle into its own period of "troubles."

Thirty years on it's depressing to see how the rasping cry of a Belfast punk band born in the depths of a civil war has become so relevant to the present situation in the Divided States of America.

Just take a look around you
At the bitterness and spite
Why can't we take over
and try to put it right? 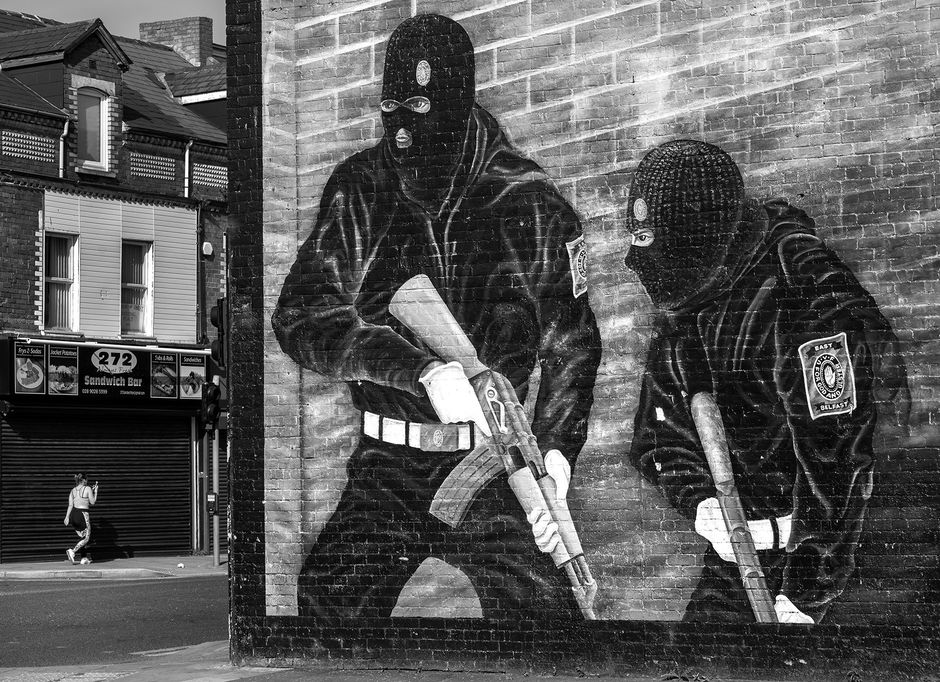 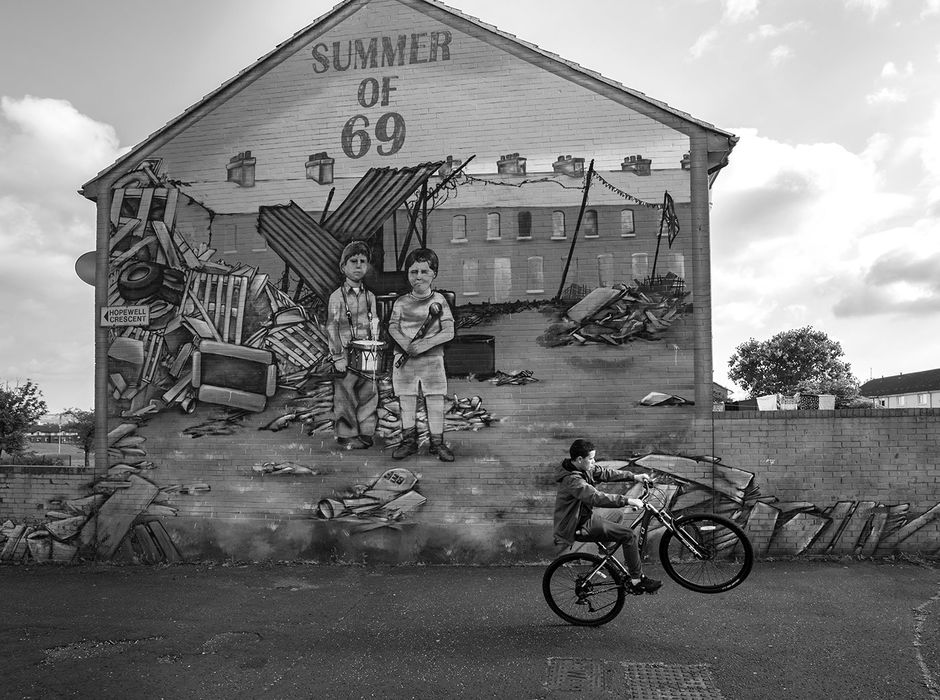 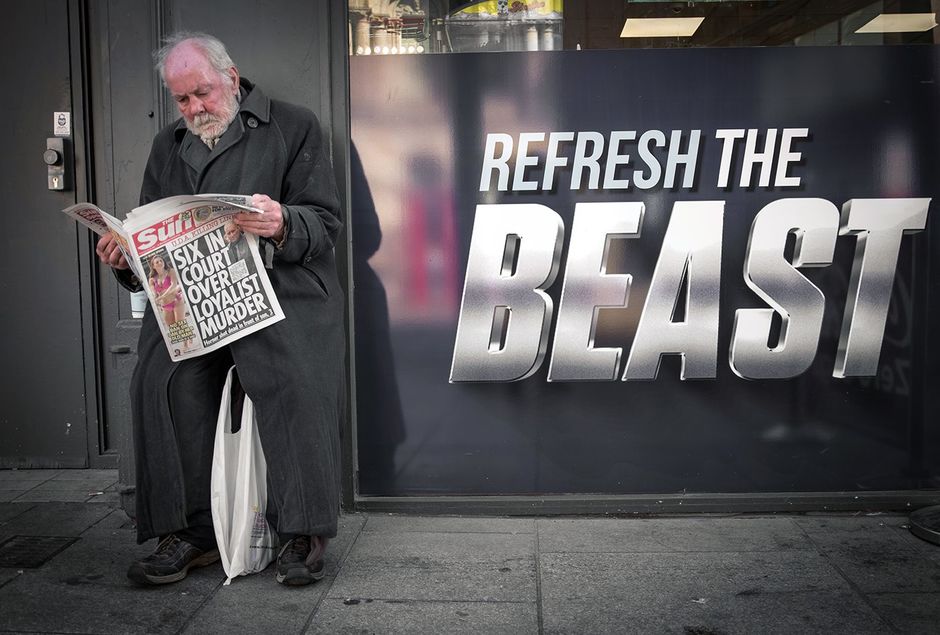 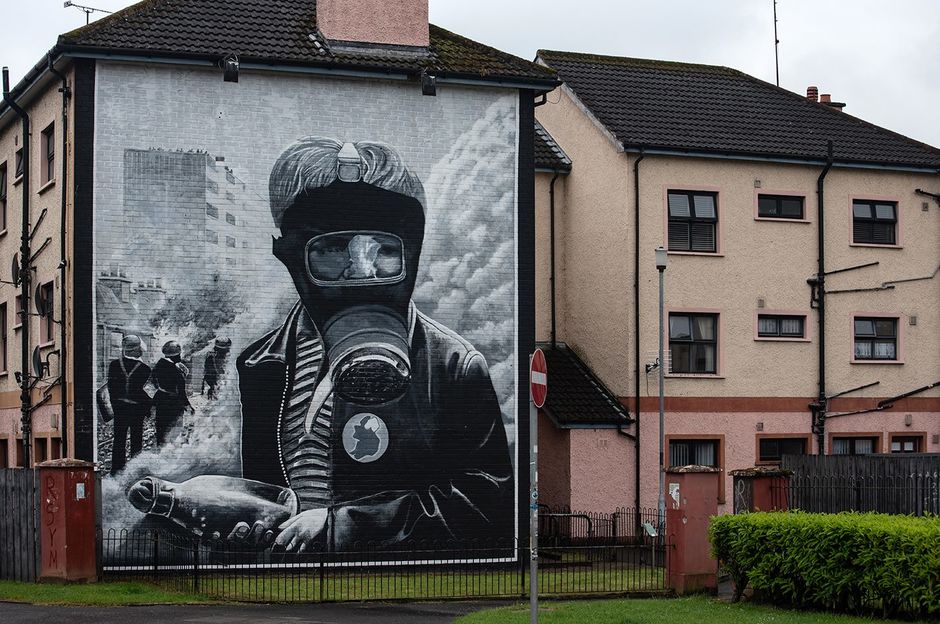 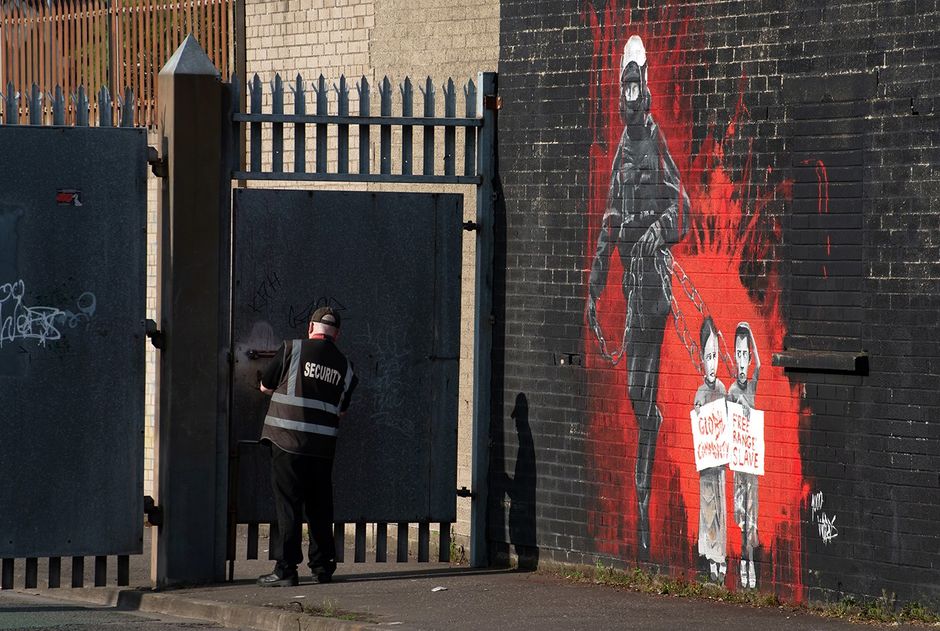 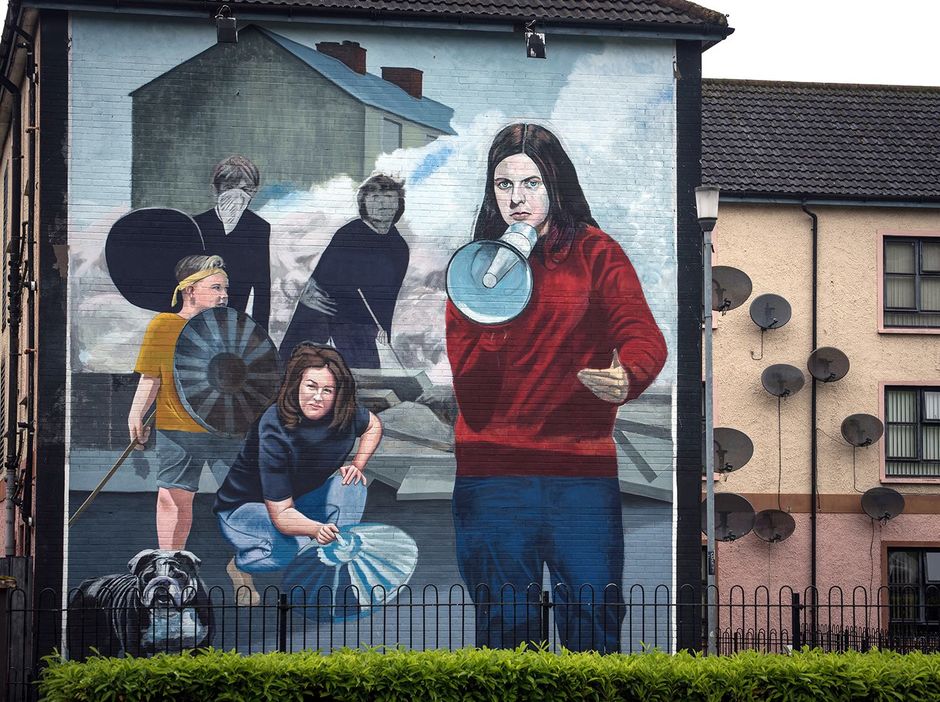 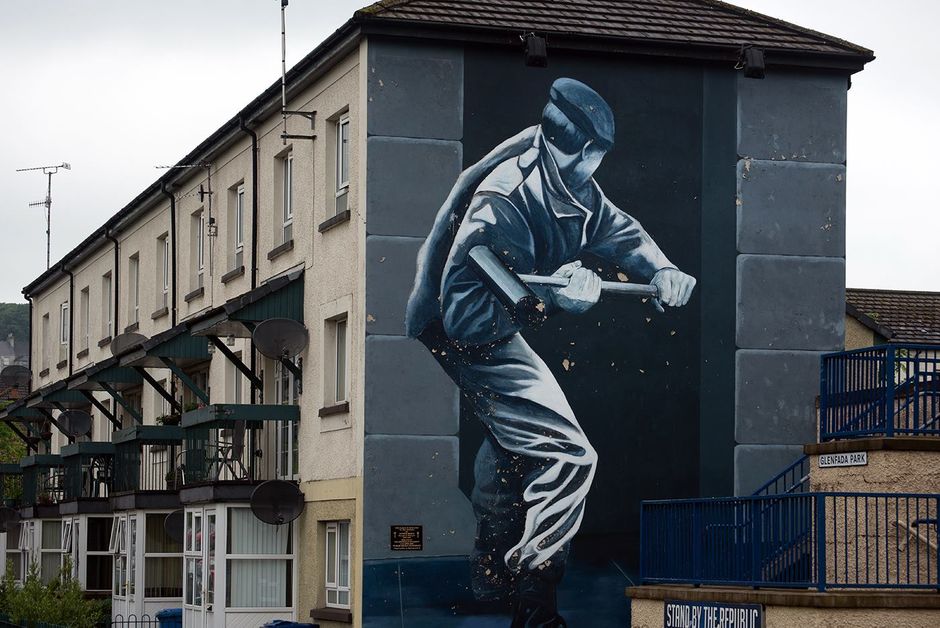 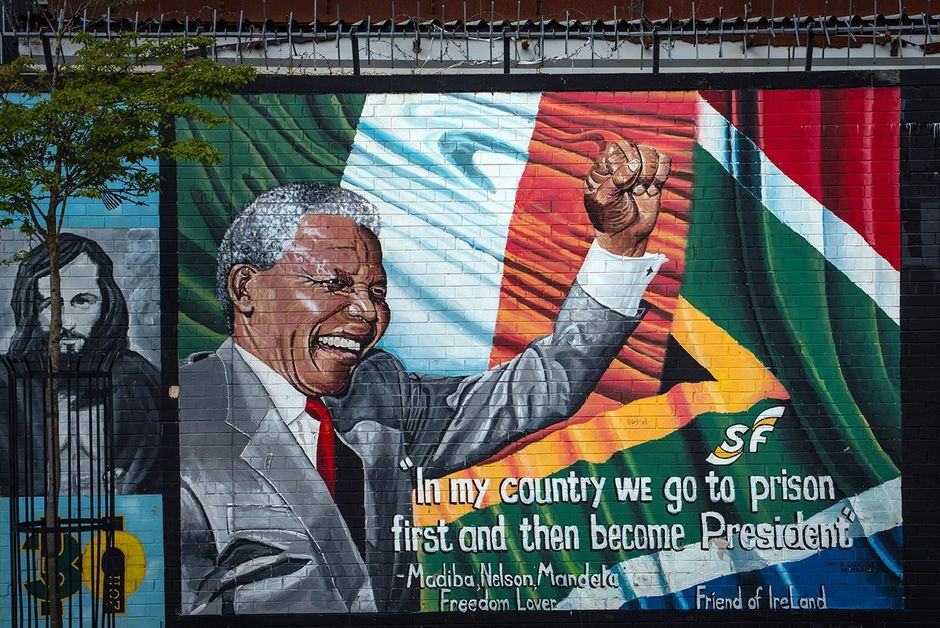 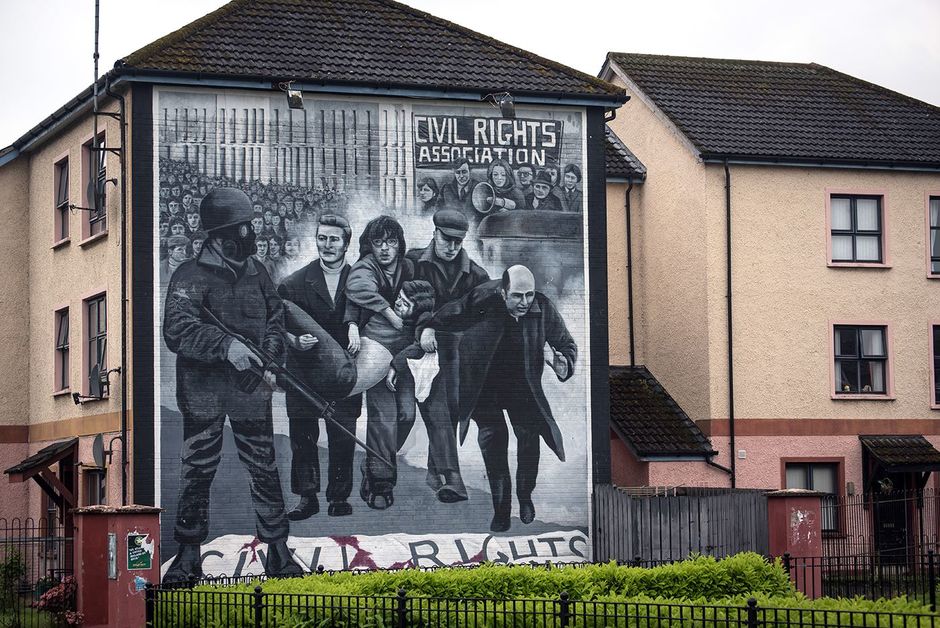 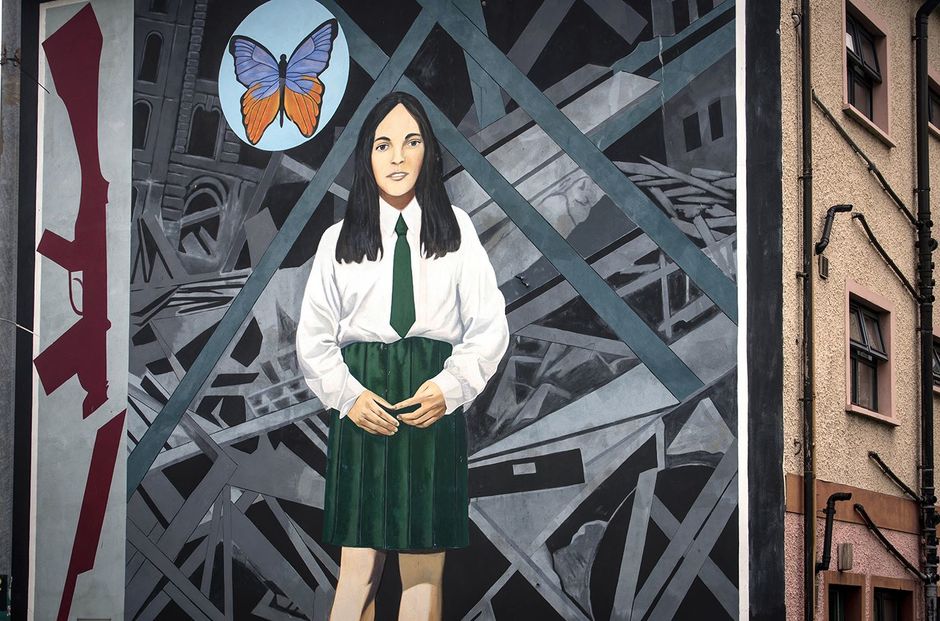 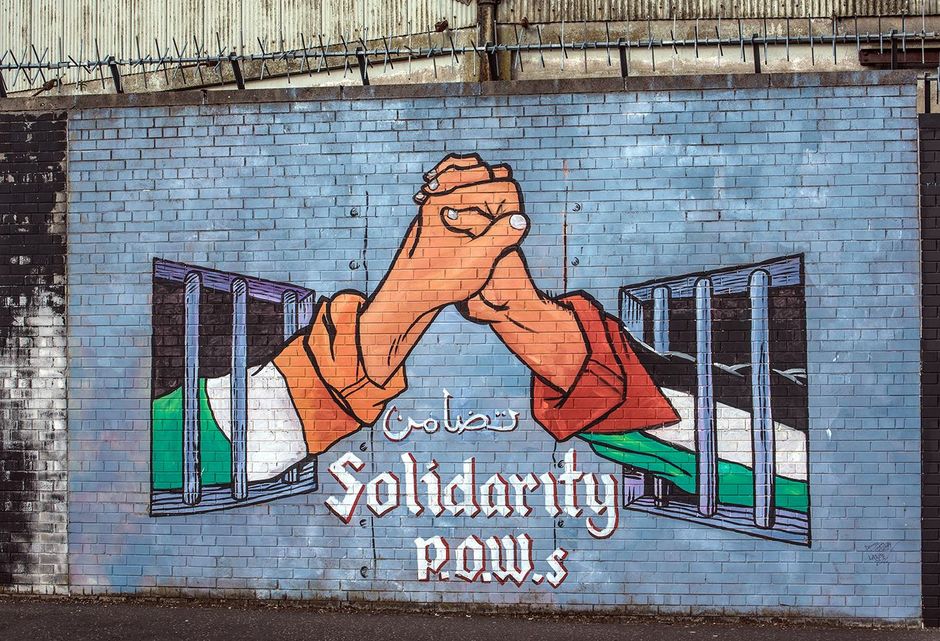