“Do you remember this?” asked Jennifer.

“Last time we were here it was midwinter and this playground was covered in ice. And you gave Bob a big lecture about being careful on the ice, how dangerous and slippery it was, and then you climbed to the top of the slide to help him. And then you slipped and fell off.”

“It’s funny how I didn’t really hurt myself that time,” I said. “Maybe because I was younger?”

“It was because of the rubber matting,” said Jennifer. “The matting they put down for little children.” She paused. “I just thought I’d mention it: the ice, and how you warned everyone about it, and then how you fell over.”

We were at the children’s playground of the Princes Street Gardens in Edinburgh. It wasn’t necessarily bringing back happy memories, but it was certainly a strange and exhilarating experience to be in Scotland, and—simultaneously—to be able to see the sun (and, indeed, to almost feel hot).

This extraordinary meteorological phenomenon had yesterday prompted the government to declare a Level Three Heatwave (only one level below National Emergency). The previous night’s STV weather report had warned that “sunscreen is essential”, and advised its viewers to drink “at least two litres of water per hour—or risk death.”

“Guess what?” I said to Jennifer. “I’ve walked in the sun all day without sunscreen, or even a hat, and I didn’t get sunburnt. Also I left my water bottle at home. You know what I think is a national emergency? Being bombed by the Luftwaffe. This is just ordinary sunny weather.”

“Why can’t you be nice?” said Jennifer. “Okay, it’s not that hot. But the Scottish are enjoying themselves so much. Let them have their fun.”

We stood awhile watching our children play with my mother. Polly, our daughter, had persuaded my mother to climb aboard a roundabout; and was propelling it in circles so rapidly that my poor mum had become a mere Gaussian blur against the backdrop of the castle and the Scott Monument.

“You see,” I said to Jennifer. “My mother was bombed by the Luftwaffe and look at how tough she is. There’s no way she’d declare a national emergency just because the sun is out. No one from Glasgow would. This is what happens when you let the Edinbourgeois run the country.” 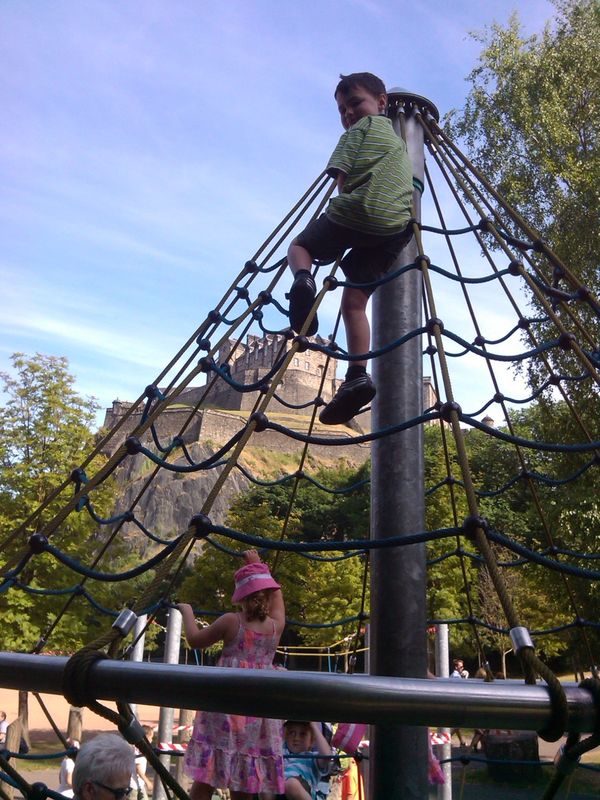 Above: Bob on playground with Edinburgh Castle in the distance.

Next to the playground, a slightly shabby-looking woman was sitting on a park bench, drinking from a brown paper bag. A young man—also clutching a brown paper bag—wandered past the bench. The woman stood up and staggered after the young man.

Shabby Woman: [Shouting while attempting to walk in a straight line] ’Zat you, Kev?

Shabby Woman: Why’re youse just walk’n past me, Kev? Youse was look’n at me all funny.

Shabby Woman: Youse was look’n at me like youse better’n me, Kev...

Young Man: I’s no’ look’n at anything, Toyah. [Pauses briefly to gather his thoughts.] Why don’ youse fucken fuck off...

Shabby Woman: [Screaming] Why don’ youse fucken fuck off, Kev? I w’s at this playground first. Youse should fuck off, not me. I shouldnae have t’fuck off! [Sits down heavily on the park bench; Kev gives her the fingers and shambles off towards Lothian Road.]

There was a brief silence while the various parents and their offspring (who had been innocently enjoying the tender moment of Toyah and Kev’s reunion) returned to their playground activities. “People in Edinburgh talk posh even when they get all sweary,” I observed to my mother. “Compared to Glaswegians, that is.”

“Yes, did you hear how Kev said ‘thing’ instead of ‘hing’,” she marvelled. “It was like listening to Charles and Camilla.”

At this point, Bob, my son, began to profess a great weariness from his afternoon’s misuse of playground equipment (climbing up the outside of the tube slide; centrifuging himself into mid-air from the roundabout). Jennifer seized upon the hope of getting him to bed early, and having a few heavenly moments of peace and quiet for herself. Polly and I decided to stay with my mother; and meet our friends, Derek and Isaac, for an evening picnic.

Derek and Isaac are Aucklanders who moved to Edinburgh a few years back. The way they tell it, life is pretty tough in Scotland’s capital: outstanding restaurants, endless cultural activities, living in a palatial eighteenth-century townhouse, being paid triple their New Zealand salary for less work. It sounded like hell.

“Yeah, and people mistake me for an All Black the whole time,” said Isaac. “I get asked for my autograph. Even Derek was asked once; they thought he was management.”

We chatted about Scottish politics. My mother has visited Derek and Isaac several times since their relocation; she astonished me with the revelation that my Glaswegian anarchist grandfather only travelled to Edinburgh once in his life. It’s a real testament to my grandfather’s judgement that he could dislike a city and its population so thoroughly on the basis of a single encounter—although, as he often said, it did used to be part of England.

Derek and I have been friends since we were twelve years old. Inevitably our conversation turned to the passing of the years and our various infirmities. “I groan whenever I have bend down below waist level,” I told him. “I’m worried that Polly will think that ‘Oh, Jesus Christ, my back’ is the word for picking up something from the floor.”

“You think that’s bad?” said Derek. “I’m in agony just sitting here on the picnic blanket. My joints have gone all achy.”

“You know what would help you two,” said Isaac, demonstrating why his interpersonal skills are so sought after in Scotland. “Trying to harden the fuck up.”

Having gorged ourselves to the edge of unconsciousness on their delicious picnic food, we retired to one of Derek and Isaac’s favourite cafés for a spot of dessert. They explained how they’d spent several arduous years enlightening the staff on the technicalities of producing a decent long black. It was the best coffee I’d had since leaving New Zealand.

There was still plenty of daylight left and it felt ridiculous to contemplate bed. Derek and Isaac suggested a quick visit to their digs for tea and biscuits—just in case there were a few unfilled cubic millimetres in our digestive tracts. It transpired that they had rather understated the grandeur of their house: three-storey entrance hall and staircase topped with a magnificent cupola; original Georgian sitting room the size of a tennis court; the sort of grand dining room that could be used to entertain royalty (and, indeed, had once claimed Sir Walter Scott, 1st Baronet, as a regular visitor); and, of course, a private garden across the way.

“Nice,” I said. “And I like the way the shutters fold back into the window frames.”

“It’s funny how the Scots were so brilliant at building comfortable homes in the eighteenth century,” observed Derek. “Then they emigrated to New Zealand and forgot everything, and started building cold, shitty houses that leak.”

I thought of Derek’s childhood home: a standard 1960s bungalow in Glen Eden. And also of the elegant Victorian villa that he and Isaac had meticulously restored prior to leaving New Zealand (with a level of perfectionism that I was attempting to emulate in my own restoration).

“Are you looking forward to going back to Auckland?” I asked.

“Oh, we’re not going back,” said Isaac. “We’ve decided to sell everything in New Zealand and stay here. Edinburgh has all we’ve ever wanted. We couldn’t imagine leaving now.”

My mother and I walked home in the long twilight. Polly was asleep in my arms. Our route took us up The Mound and along the Royal Mile. On High Street we saw a man who resembled David Cameron; except that he was shirtless, and had the word ‘SCOTLAND’ emblazoned across his chest in lipstick.

“Surely that can’t be David Cameron,” I said to my mother.

“It does look very like him,” she replied uncertainly.

The Meadows were populated by picnickers drinking wine in the fading light, and dining on food that looked distinctly un-Scottish. As we walked past the playground, Polly awoke with the words “put me in the baby swings” and then instantly fell asleep again.

Derek and Isaac had fallen in love with this city, and I could see how it might happen. Scotland’s capital, I decided, was rather like those mousy librarians in the movies. My previous assessments had never looked beyond her hair-bun and spectacles. Under blue sky and sunshine, the city unexpectedly shed its glasses, unleashed a cascade of glamorous movie-star hair, and gave a slow, come-hither smile.

It was, I realize, a deeply unworthy and disloyal thought for the son of a Glaswegian to have—but I couldn’t help liking Edinburgh.