At 12.51 pm on 22 February 2011, I had just finished writing a piece about the arrival of my daughter, Polly (who had been born three weeks previously). A moment later, my computer exploded all over the room.

Miraculously, however, the hard-drives survived, and a couple of years later I’ve been able to recover the data. So here, at last, is my unpublished blog from that day just before the earthquake struck...

Two traumatic incidents within the space of 48 hours is really too much.

The first incident occurred following a visit to the barber. Bob had been exceedingly—not to say unnaturally—well-behaved during his haircut, and I suppose he had lots of parent-embarrassing energy that needed to be released.

As we were riding the lift to the parking building, he began to expound upon the strange feeling of suddenly having less hair: “My neck feels like a snow-penguin, and also like a big bag of ice is weighing on my throat, and also like my head has been chopped off by scissors...”

Our fellow lift-traveller, an elderly lady, felt moved to interject a question. “Has Daddy taken you to the hairdressers?” she asked.

Bob paused in his monologue. “No,” he said sorrowfully. “Rats ate my hair.”

The elderly lady swivelled her head in my direction and gave me a long, condemnatory stare. Possibly the sort of accusing gaze that you inflict upon a man who lets rats eat his son’s hair; possibly the look reserved for a man who raises his son to tell such outrageous lies.

Two days later and the psychological scars of this condemnatory stare were just beginning to heal when a second traumatic incident occurred. My blissful Saturday night slumbers were interrupted by Jennifer poking me in the back with an insistent finger. “Wake up,” she said. “It’s time.”

Oh dear, I thought, has it been nine months already?

The still-sleeping Bob was put under the supervision of a kindly neighbour. Jennifer and her surprisingly heavy suitcase were loaded into our car. We set forth through the dark night to hospital.

In the maternity ward, Jennifer unpacked her suitcase to reveal a laptop, an external hard-drive, a draft doctoral thesis from one of her students, and a small quantity of baby clothing. In short order, she managed to re-confirm her discovery that midwives are really annoyed by maternity patients working on laptops.

I sat beside her bed in the useless manner that I’d perfected when Bob was born. Occasionally I would hand Jennifer a glass of iced water. The midwife checked progress and made pointed comments about the laptop.

After a few hours it became obvious that events were inexorably underway. The laptop was removed from Jennifer’s reluctant hands. My useless strategy of iced water was upped to an almost-as-useless strategy of hand-holding and back-rubbing. “You probably want to consider some pain relief at this point,” said the midwife.

Poor Jennifer looked anything but okay. The birthing process was obviously reaching its final stages. Her breathing came in huge, ragged gasps; her teeth were clenched with pain. It was agonizing to watch. I’d have been swearing my head off, screaming for an epidural—but Jennifer just grimly worked her way towards delivering the baby.

Polly was born shortly after dawn. “You can cry if you want to,” said the midwife, who seemed slightly disappointed by our lack of waterworks.

I held Polly while the midwife organized the weighing scales. “I’ve delivered hundreds of babies,” she remarked. “Your wife is a very strong woman, isn’t she?” During the pregnancy there had been a few moments of disagreement over Jennifer’s intention to stay working until the baby was born. That all seemed to be forgiven now. “I’ll make your wife some marmite on toast,” decided the midwife.

It was extremely good marmite on toast. I was allowed to eat a slice—even though I hadn’t done anything.

Shortly thereafter Jennifer and Polly were wheeled down to the parking bay, and loaded into our car. Have you ever driven in Canterbury? For some reason, most drivers in our province become borderline psychopaths as soon as they sit behind a wheel. Indeed, even the most responsible Cantabrian motorist won’t hesitate to ram your car if they think it’ll shave 30 seconds off their trip. I wondered, once again, how the DHB has come up with a system that requires parents to play dodgem in the streets of Christchurch with two-hour-old babies on board.

By the end of the trip my body had never contained so much adrenaline. I was shaking like a cold-turkey alcoholic. Perspiring with anxiety, I gingerly transferred Jennifer and Polly into a wheelchair, and delivered them carefully to the post-natal ward. “Lift’s broken,” said the receptionist. “Wifey’ll have to trot up the stairs, okay?”

“No, it’s certainly not okay!” I yelped. “She’s just given birth. This is unacceptable! I’ve had medical advice that my wife mustn’t walk. I demand that you provide a lift! Our midwife ordered me to take extra-good care of her—this is an outrage!”

“Hmm,” said the receptionist. She called a nurse. The poor nurse spent twenty minutes with us, traipsing back-and-forth all over the hospital, locking and unlocking doors, until eventually she discovered a route that allowed us to reach the post-natal ward via a lift. She wasn’t best pleased.

“I could actually have walked up the stairs,” said Jennifer, after the nurse had gone. “But you seemed to think that you were being helpful.”

Jennifer and Polly were assisted into bed for some much-needed sleep. Later that afternoon I took Bob along for a visit. “We’ve moved your wife to a new room,” explained a helpful hospital midwife. “I’ll show you to the way.” Her nurses’ shoes squeaked along the shiny corridor while she engaged Bob in friendly conversation:

Nurse: And do you have a new sister or a new brother?

Bob: I have a new sister and when she’s older I’m going to buy her a gun. And I’ll have gun too, and I’m going to weld sockets on our guns so that I can tow them with my truck. Then we’re going to shoot kiwis, and their meat will fly through the air, and land in a basket. And a robot will cut the meat into slices so that we can take it home to eat. I’ve already designed the robot.

Jennifer was tucked up in bed wearing a nice white hospital nightgown. Her long hair was fanned across the pillows. She held a tiny bundle in her arms.

“Hello Mummy,” said Bob, putting his head on one side to get a better view of his new sister.

“Hello Bob, it’s very nice to see you,” said Jennifer. “Would you like to sit here and hold Polly?”

“Why is she so tiny?” asked Bob indignantly, with the air of a man who’s been handed an insufficiently large portion at a restaurant.

I had a sudden recollection of Bob attached to a tangle of tubes in the intensive care unit. “You were much smaller than Polly when you were born,” I said.

The next day Bob made a large placard for our front door: “Welcome Home Polly!” He was almost dancing with excitement as he introduced his new sister to our house. “This is the hall, Polly. This is the sitting room. This is my bedroom. Here’s where you’re going to sleep, Polly. Can you see the river? When you’re older I’ll build a boat and take you rowing there.”

“Please read us Mike Mulligan and His Steam Shovel,” he announced. “I’m sure Polly would really like that.” Bob retrieved the book from the shelf and thrust it into my hands.

“Perhaps you could look after the children while I get unpacked,” said Jennifer, handing my daughter to me.

Polly snuffled into my neck as I manoeuvred myself carefully onto a chair. Bob plonked himself heavily into my lap.

Our offspring were in the plural now, I thought. One child is the sort of accident that could happen to anyone—it doesn’t really conclusively prove that you’re a parent. But having two children is the final nail in the coffin of parenthood. There’s no denying it now.

Bob and Polly snuggled warmly against me. I read aloud the words, “Mike Mulligan had a steam shovel, a beautiful red steam shovel. Her name was Mary Anne.” And I thought: being a parent isn’t such a bad thing, is it. 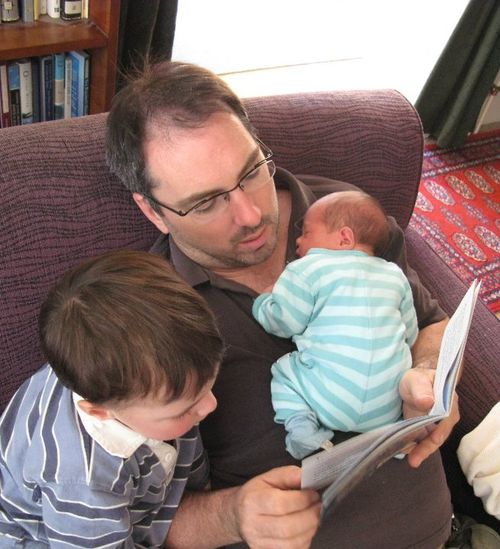 Above: Polly arrives home for the first time. 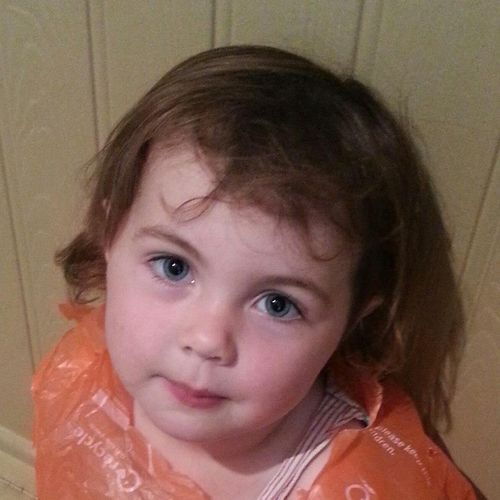 Above: Polly as she is today.