My anarchist Glaswegian grandfather was a man of many strange theories. Some of them, I have subsequently realized, were actually rather clever and forward-thinking; others still seem to be pretty daft.

Here are five of his theories that rise immediately to the top of my mind:

As a child and young teenager, I held the opinion that four-fifths of the theories on this list were absolutely bonkers (Theory #1 being the obvious exception). But nowadays I’m not so sure that my grandfather was quite as wrong-headed as I once thought.

I recently had a discussion with a former colleague about the lack of checks and balances in New Zealand’s parliament. My former colleague considered it a shame that Jim Bolger’s scheme for an elected senate had been abandoned. This, in turn, prompted me to mention my grandfather’s proposal for two upper houses in New Zealand. “That’s an intriguing idea,” said my friend. “You should get him to write an article about it.”

It is unfortunate that my grandfather is no longer around to fulfil this request. But after some consideration I find myself inclined to agree that his concept is worth putting down in writing. In many ways, my grandfather seemed destined to have been a political blogger; he just had the misfortune to be born at the wrong time. So it seems only reasonable that I should correct history’s bad timing by giving his ideas an airing on the internet.

My grandfather’s proposal for two upper houses arose out of his dissatisfaction with the parliamentary systems in both his native Britain and his adopted home of New Zealand. He despised the British House of Lords with its millionaire toffs, bishops, and inbred nobility; but acknowledged that it provided a useful check on the House of Commons. On the other hand, while he approved of the absence of bishops and hereditary peers in New Zealand’s parliament, he felt that the House of Representatives were dangerously unchecked without some sort of upper house.

But my grandfather also doubted the ability of elected politicians to act as a check on other elected politicians. “The inherent problem with politicians,” he often proclaimed, “is that they are politicians.” It goes without saying, of course, that he disapproved of any upper house whose members were appointed by the leader of the lower house, as effectively happened in New Zealand’s old Legislative Council.

Hence my grandfather’s unorthodox proposal for two demarchic upper houses. Here’s how he envisioned the system would work:

My grandfather was quick to point out a number of good reasons for using jurors rather than elected politicians to provide a check on the House of Representatives:

My grandfather’s choice of age as the method of dividing the two parliamentary juries is rather ingenious. In theory, I suppose, the juries could be divided by any means (such as, for example, sex or level of education) so as to make them as dissimilar as possible—the idea being, of course, that if two very dissimilar upper houses agree about blocking a bill then there’s probably a sound basis for doing so.

But dividing the parliamentary juries according to age gives an added advantage over other approaches. The match between parliament and society in terms of sex, class, and ethnicity has improved dramatically in my lifetime. But there are obvious practical reasons why those aged under 25 and over 70 will always be under-represented. My grandfather’s proposal addresses the lack of representation for these age groups while at the same time providing the intended check on the House of Representatives.

There are certainly a couple of potential disadvantages associated with parliamentary juries: primarily due to the chances of selecting an extremely eccentric juror, or the problems associated with compelling an unenthusiastic juror to serve. But the ability of the House of Representatives to challenge the appointment of jurors would minimize the chances of the former; and the age division of the juries would minimize the latter, since both age groups are at a time in their lives when the inconvenience would be comparatively minor (and, no doubt, both age groups are also at a time in their lives when a parliamentary salary would tend to balance out a considerable degree of unenthusiasm).

Of course, there are endless minor details that could be discussed. Should the upper houses be physically situated in Wellington? (My grandfather favoured one in Northland and one in Southland.) What resources in terms of researchers or administrators might the jurors be allocated? What would be the rules with respect to jurors receiving delegations from the public or elected politicians? To what extent would jurors be permitted to discuss the internal proceedings of the upper houses? These are all interesting details; but I don’t think any of them are particularly difficult to resolve.

My grandfather always acknowledged that governments in New Zealand are elected to govern. Unfortunately, however, history has clearly shown that our governments don’t always govern as promised; and sometimes embark on radical programmes that were never mentioned in their election manifestos. Often there may be good reasons for governments to do these things; but if a government bill is rejected by a majority in two different parliamentary juries (with radically different compositions) then there’s a high probability that the bill genuinely isn’t a good idea, and that it’s to the country’s benefit that it doesn’t pass.

I’m under no illusion that John Key (or any members of his executive) will read this account and suddenly declare that New Zealand needs two demarchic upper houses. But the more I think about my grandfather’s proposal, the more I admire its ingenuity as a means of providing an efficient check on the House of Representatives without reducing the government to a state of paralysis. In many ways it’s not even such a radical proposal—after all, juries are an established means of reaching an impartial verdict, and their use has been refined over hundreds (at least) of years.

I’ve spent many hours of my life arguing with my grandfather over his strange theories. In writing about his proposal for parliamentary juries, I find myself with the same thought that often used to strike me after these arguments: “It probably is a daft idea, but wouldn’t it be interesting if somebody tried it?” 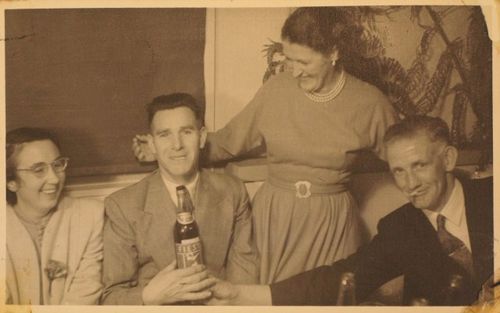 Above: My grandfather (second from left) deep in political thought.