Poor old TV3 was trying to beat up the John Key line over protecting rapists and murderers, and seemed confounded by the fact that the Labour Party was up in arms about it, yet somehow this wasn't reflected in their latest poll…

The media, especially the political media, follows in microscopic detail every utterance and nuance, and seems continually amazed that very little if any of it makes it outside the beltway and into the daily subconscious.

Hosking is right, much to the annoyance of everyone – on all sides – in the Thorndon bubble.

At this point in the cycle, single events usually don’t move the polls. Whether it’s rants about rapists, increased benefit levels, provocative housing data, or Saudi sheep shenanigans, much of the public aren’t tuned in to politics, so they don’t notice the events and don’t change their mind because of them.

Most lower-interest swing voters are currently tuned out. And the politics junkies who remain engaged usually have stronger allegiances; so don’t change their mind, either.

No wonder the polls are only moving slowly.

Second, and more important, is Hosking’s prediction about 2017:

But let us look to the latter part of next year and indeed into 2017 election year, and here's what will matter, what will shift polls and potentially shift the Government out of office.

The economy is growing, and so it should be easier for people to find work. But jobs are getting harder to find, not easier, and it’s going to get worse. That’s what the unemployment figures show, and it’s not good.

National’s response has been to distract and confuse.

National also says its critics have amnesia. Don’t they remember the GFC, or the earthquakes?

Again, it’s a distraction. High unemployment today has very little to do with the GFC or the earthquakes. Here’s an unemployment chart from Trading Economics, which I’ve annotated to show the GFC and earthquakes: 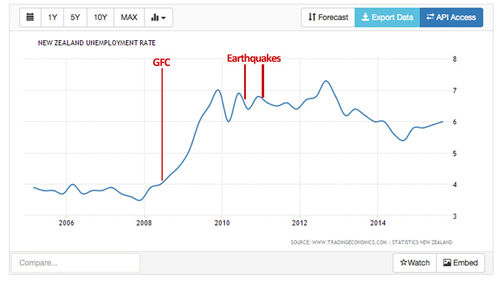 The chart shows increased unemployment in 2009 wasn’t National’s fault. That was the GFC. It’s also clear, and intuitive, that the Canterbury earthquakes had little lasting impact on nationwide unemployment.

But the relatively high (6-7%) unemployment lasted a full six years from the GFC, until the start of 2014. It’s hard to blame the 2008 GFC for 2014 era unemployment, especially when – as Hosking notes – our banking system wasn’t hit as hard as others’, and their unemployment rates have fallen more quickly than ours:

For all the growth and success and rock star headlines, you have to have something tangible to show for that. A rising unemployment rate isn't a good look.

If things continue the way they appear to be going, then we'll be getting spanked by other countries.

Australia is trending down, Britain has the lowest unemployment rate in eight years and America's rate is in the 5 per cent area. We're dragging the chain.

The trend is for things to get worse again in 2016. National’s response should be to get off its butt and start helping businesses to generate enough jobs for our people.

But the track record suggests otherwise. It suggests excuse-making, instead. And that will make jobs a top-tier election issue.

Ask me my three priorities as Labour Leader?

You can ask me my top ten as well but I think you get the gist.

It sounds like the commission’s big ideas will start coming out late in 2016, giving them a full public airing through election year. That gives plenty of time for jobs to develop as the election-deciding issue.

Labour’s election theme will on jobs most of all, with strong pitches on housing, health, and poverty, too. As I said the other day, the early signs point to a very tight race.