In its first update since the Christchurch earthquake, Treasury lowered their GDP forecast by $15b. The Government has ran with this and are preparing us for a massive cut in this Budget, saying that “everything changed” since the earthquake. That's not quite true: 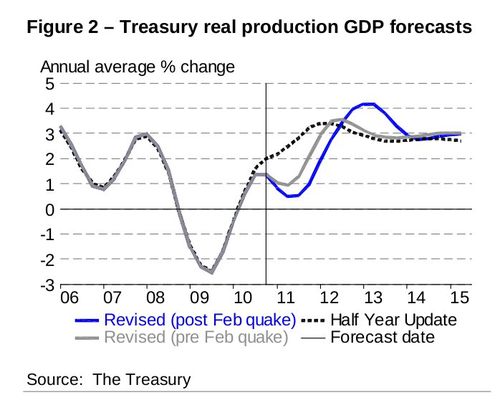 The change to our economy is strictly temporary, but more interesting is where that change came from:

“Over the 2011 to 2015 March years, nominal GDP is expected to be a cumulative $15 billion lower than in the Half Year Update (around 1.5% of nominal GDP over the whole period). This is mostly related to the weaker outlook we were seeing prior to the February earthquake, which accounts for $10 billion of this change.”

Guess “two-third of everything changed since Treasury realised their forecast for recovery was wrong” doesn't have the same oomph. What's changed is that we haven't come out of the recession as well as we'd hoped; what hasn't changed is that we are still stuck in the same hole – indebted, underperforming and aging fast. The earthquake was an additional kick in the nuts, but even if it didn't happen, we'd still be in the same position today.

This is why the “how do we pay for the rebuilding” debate makes no sense. On one hand, English pooh-poohs the Greens' proposals for a levy because we shouldn't take money out of the economy while it's so fragile. Yet, as No Right Turn points out, spending cuts have exactly the same effect as new taxes. The only way to inject money into the economy is to use money from outside the economy. In this context, that means taking on debt.

But ah, there's another difference. Cutting spending is permanent, while a levy is temporary. It doesn't make sense to pay for a one-off event with a permanent spending cut – unless they're not doing it to pay for the one-off event. And this is where I get horribly torn. I started off this year wondering how we'd ever get the political will to make the necessary cuts, and now I know: By pretending it's for the quake.

I feel filthy for supporting this sort of spin doctoring. This kind of public deception is why we are constantly unable to enact policies that are clearly necessary. But here we are. We know we need to reduce our deficit, National has been presented with the opportunity, and the prospect of us arriving at the same place through rational public debate is slim. It stinks, and it's not free either – the most immediate cost is a more depressed economy, since we would be deliberately not inject money into the economy, when it's the best time to do so.

Another objection is that cuts by National will probably be disproportionately borne by the poor (but possibly not – we'll see). Here's my other argument: At some point, we'll need to concede some ground. As a political reality, we have no choice; but as a matter of political morality, we can't expect cuts to further our values, and discount the values of the Right as invalid. If we accept that cuts are needed to reduce our long-term deficit, then we need to accept that some of them will fall on things that we consider to be worthwhile.

It doesn't mean we're obliged to concede everything because National is in power. But if we are completely unable to compromise, the deficits will eventually bury us all.

I am glad that we'll get to have this argument. At the last Budget, I complained that English got his massive debt reductions from committing future governments to cutting spending – thus avoiding having to do much himself. This time, he's taking it on the chin.