In an era when the Archive is being opened and formerly inaccessible items are just a search and a click way from viewing, curation becomes the name of the game. NZ on Screen has compiled a selection of GLBT movies, documentaries, shorts and TV programs. It gives us a glimpse of time and change, from the 1980s to the present. It is a remarkable journey and it effectively begins with David Halls and Peter Hudson.

Hudson and Halls was a New Zealand produced cooking show, where two men guided the audience through a variety of aspirational recipes, with flair and innuendo. There was blond, affable, British-born, David Halls and the smaller and snappier Australian, Peter Hudson. The programme was extremely popular, and survived mystifying attempts by TVNZ to cancel it. By 1981 the show was regularly ranked in the week's five most highly-rated programmes in New Zealand and the duo had won a Feltex Award for Best Entertainer of the Year. The Hudson and Halls series was produced prior to New Zealand’s Homosexual Law Reform in 1986 and the hosts occupied the curious space of flagrantly homosexual men on a public medium in an ostensibly intolerant society. They were blatant, in full sight, and with all the innuendo associated with the curious complicity of the audience in the matter. Everyone knew but no-one was telling.

The associated publicity material informed the audience that the two men were unmarried and shared a house but their relationship was never specified. Even South Pacific Television, the programme’s later producer, was in on the act, quoting Noel Coward in their publicity material: ‘We’re not sure if they are gay, but they certainly are merry.’

Hudson and Halls were camp. They were part of the long history of British Queerness that for much of the Twentieth Century was the only authorised mode of public gay expression. Camp had its roots in the British theatre, particularly the broad tradition of popular entertainers and music-hall comedians. The audience was automatically drawn into a arch and mannered world that, despite its superficial comfort, was deeply subversive.

Hudson and Halls' primary mode of humour was the double entendre, a statement that could be taken on two levels, one conveniently safe, the other more sexually knowing. ‘I’m adding a few twists of coarse black pepper to that – very good for the wrist-action,’ Peter Hudson murmurs over a recipe.

While there were other homosexual men featuring on New Zealand television at the time, like the TV host and quizmaster Peter Sinclair, their sexual identities were not so obvious. The fact that Hudson and Halls were not New Zealanders also gave them permission to exist in ways that perhaps were not open to the New Zealand born – Hudson and Halls could be gay because they were foreign.

Their speech was filled with the drawl and enunciation of an international gay culture. Hudson and Halls, with their often unscripted banter, took us to the heart of a homosexual intimacy.  Their on-screen dynamic was the style of a familiar gay couple, with spats, moods, and squeals.

Hudson and Halls were long-term lovers. They were both immigrants, who'd met in New Zealand, and who'd begun hosting a small 10 minute cooking segment on daytime TV that had blossomed into a show. They’d have a decade-long run of success with their Hudson and Halls series and its spin-offs – cookbooks, media-appearances, a restaurant, and a radio show.

Buoyed by their popularity, they left New Zealand in 1986. They began a cookery series for the BBC but, despite European syndication, they would never achieve the same level of mass-appeal they’d had in New Zealand. Peter Hudson would die of cancer in London in 1992 and David Halls would commit suicide from grief the following year.

Apart from the nuanced and coded Hudson and Halls, and a current affairs documentary or two, the subject of non-heterosexual relations was seldom apparent on New Zealand TV between 1960 and 1980. Instead, somewhat startlingly – because it came completely without local precursors - its first major manifestation was Richard Turner’s 16 mm, 80 minute, feature-length movie, Squeeze, which would screen in New Zealand cinemas as well as many overseas film-festivals. 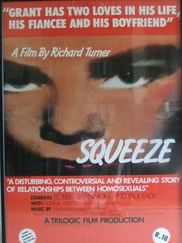 Squeeze was filmed in 1979 and released in 1980 and was the first New Zealand movie to focus on New Zealand bisexual and gay men - and a Kiwi gay subculture.

Turner had previously made a suite of short films based upon New Zealand poems, a TV documentary Two Rivers Meet / Te Tutakinga O Nha Awa e Rua, which showcased Maori poetry, and Death of the Land (1978) a courtroom TV drama which focused on the sale of a block of ancestral Maori land. He had also begun a documentary on Black Power that was never completed. As Turner would later say ‘Squeeze was part of a body of work that challenged form and content on a number of fronts. It did not sit in isolation.’

Squeeze received its initial script funding from the Queen Elizabeth Arts Council for Script Development Assistance, but was refused further government funding because it its homosexual content.

The movie would eventually be entirely ‘crowd-sourced’. Its $100,000 budget would come from individuals within the gay community, from small investors to larger partners like Tony Katavich and Brett Sheppard - the producers of OUT! magazine and owners of a string of gay saunas and nightclubs - and James Wallace - owner of the large Wallace Corporation, a tanning and animal by-parts rendering company and more lately a prominent Arts philanthropist.

Squeeze is the story a young gay man's first explorations of the gay world of Auckland, his developing relationship with a man who plans to marry, and his encounter with another who is more comfortable with his sexuality. A host of wryly observed secondary characters range from drag-queens to gay bar drinkers and street pick-ups. In some ways, it was a coming-out movie for New Zealand, opening up a whole milieu that had never previously been acknowledged or observed in such detail.

The movie was gritty and moodily-lit. It was New Zealand’s first truly urban movie – there are no farms, beaches, or scenic tourist clichés. Squeeze was entirely shot in real city locations – Auckland streets, inner-city flats and houses, the City Hotel, the Westside gay sauna, the Backstage gay club, and the cruising areas including the Albert Park public toilets. It remains a guide to this lost world and sometimes one of the few extant visual records of these places.

Turner states the visual look of Squeeze was the memory of being taken to Piccadilly Circus as a child and being ‘awed by the display of colour from the neon lights and the way they lit seething crowds.’ Another influence was the underground Australian movie, Pure S AKA Pure Shit (1975), directed by Bert Deling, where four junkies search inner-city Melbourne for drugs.  ‘What excited me about Pure S is that it showed me what I could do in an inner city urban environment with little budget, low lighting, and high speed film. Pure S showed me I could use Auckland's inner city to re-create my nine year old’s memories of Piccadilly Circus.’

Auckland punk provided the movie’s soundtrack: Toy Love, The Features, and the Marching Girls. The movie’s title derived from the Toy Love song of the same name which provided its title-theme. The selection of music is indicative of Squeeze’s continuing cultural relevancy for it is precisely this music that is now seen as a valued legacy of the era. It adds considerably to the raw urban feel of the film.

The plot of Squeeze with its bisexual lead character, played by Robert Shannon - who would later die from HIV/AIDS - was built around the phenomenon of the closet, where a man would conceal his homosexuality in one part of his life while acting it out in another. The movie juxtaposes a heterosexual world and a hidden gay milieu to considerable effect. The movie’s observation of the tensions of its conflicted lead actor makes it a crucial on-screen document for the sexual attitudes of New Zealanders in the mid-late Twentieth Century.

‘I don’t think I particularly set out to challenge form and content,’ Turner said. ‘If I had known what upset it was going to cause, maybe I would have carefully tiptoed the line.’

From Squeeze's first script-funding a concerted campaign had been mounted against it. The movie and its finance were discussed in Parliament with questions instigated by Patricia Bartlett’s ultra-conservative Society for the Promotion of Community Standards. Squeeze, despite its relatively innocuous sex-scenes, would eventually be given an R18 Certificate by the New Zealand censor.

Squeeze received many laudatory reviews from the overseas media. ‘What is most important about Squeeze is the steadfast compassion with which it views its hero,’ wrote Kevin Thomas in the Los Angeles Times. ‘Turner does not judge him for trying to accommodate himself to an oppressive society in which he’s trying to get ahead by its rules nor does he forsake him when his life begins to unravel. Squeeze is a drama of most painful self-discovery, well-acted and heightened by an aptly moody, restless score.’

Squeeze was a significant movie for both New Zealand film-making and New Zealand gay life. The raw, urban, night-time docu-drama was about as far as one could get visually from other New Zealand movies of the era. The movie also depicted a gay subculture and its conflicts in the last years of its illegality - a representation of immense importance to its first audience who had never before seen versions of themselves or their lives on screen. It represented a new confidence that would be subsequently be seized upon by other film-makers to explore their own visions of a local cinema and TV