It does not take any special insight to suppose that Helen Kelly's media campaign on medical cannabis – framed as it has been in the context of her own battle with lung cancer – might have moved public opinion on the issue. Well, now we have some data how that opinion is shaping up.

The most remarkable element of the UMR polling question on medical cannabis, reported in the past hour on Checkpoint with John Campbell, is the consistency of support, across demographics and political allegiances, for the proposition:

Do you support or oppose the use of marijuana being allowed for medical purposes?

But before we proceed, a word on the provenance of these results. The medpot question was included in UMR's polling to February 15 as a favour on the part of UMR's lead researcher Stephen Mills, who is a friend of Kelly's. Mills included a subsequent question on attitudes to the law on cannabis in general. If that second question seems a little off the pace of the current debate, that's because it's been brought back – after 19 years! – from a series UMR did for the National Business Review.

The results of both questions were Helen Kelly's to do with as she wished. She showed them to one news organisation – which, weirdly, couldn't see a story in it. When I drew Checkpoint's attention to them, the response was quite different.

By chance, it has all happened in a week marked by interesting interviews with Peter Dunne and Kevin Hague on Morning Report today (as Dunne has noted, his comments won't be such a surprise to anyone who has read the new National Drug Policy), and the declaration by the Johns Hopkins-Lancet Commission on Public Health and International Drug Policy that all drugs should de decriminalised. 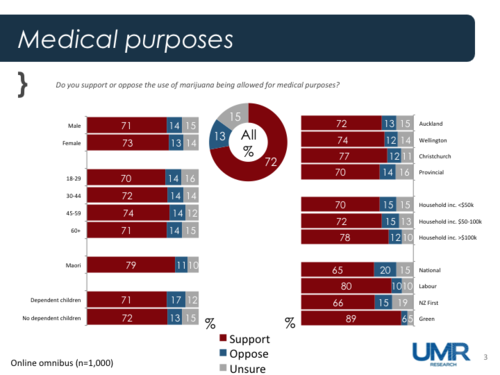 You'll note that the lowest support for the proposition is among National Party voters, at a mere two thirds, with 20% opposed. The response from New Zealand First voters was roughly the same. In all other groups – across age, sex, location, domestic circumstance and voting allegiance –  support is 70% or greater. We've seen strong poll support for medical cannabis before, but I'm not sure it's been quite this universal.

I'd like to see a research company now step up and ask a more sophisticated series of questions. Do you support access to raw cannabis for medical purposes? Or only cannabis-based pharmaceutical products? Should people be able to grow their own for medical purposes? Should medical cannabis be regulated exactly the same way as pharmaceutical drugs, even if that currently means many people who need it will find it difficult and expensive to access? Should people using cannabis for purposes such as palliative care or pain relief be treated the same by the police as ordinary dope smokers? Should there be some way of providing safety advice to those people, or are they on their own?

I take a similar view of the second question:

Do you personally support or oppose the legalisation of small amounts of marijuana for personal use? 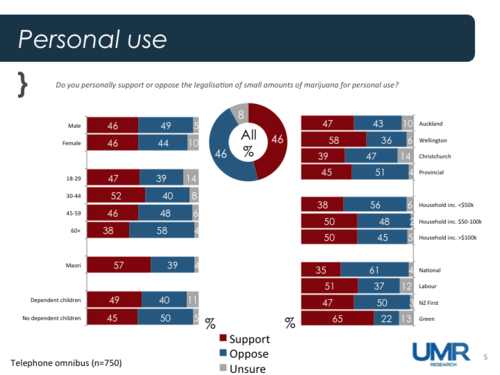 The overall result is a 46-46% dead heat, with 8% who don't know. Support is weak among National Party voters – but also amongst the least wealthy households. A slim majority of Labour voters is in favour, while Wellington is gaggin' fer it. Older New Zealanders are notably less keen than they are on medical cannabis.

And yet, there is a significant shift towards support over 19 years: 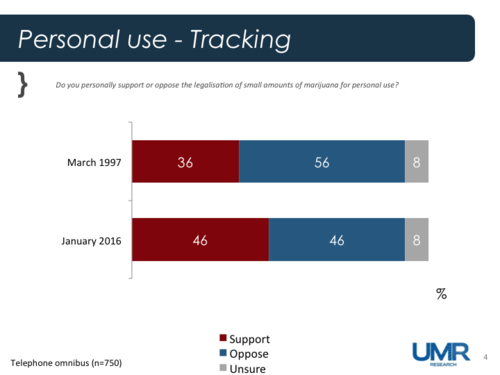 But this question is, frankly, a bit broken. It uses the word "legalisation" but describes something that looks more like a form of decriminalisation – only "use" is "legalised", and only in a "small amount", implying that supply and distribution would not in fact be legalised. The two terms are constantly confused in the media and that's a problem if we're to consider the appropriate policy.

If we're in favour of legalisation, what does that mean? Sale and distribution by private enterprise, as in Colorado; or by the state, as in Uruguay? Do we want marijuana regulated like alcohol, or like psychoactive drugs, as per the Psychoactive Substances Act? Do we stick with our Smokefree philosophy and only legalise less harmful ways of consuming cannabis? Should advertising be allowed? Should tax revenues be tied to education and treatment?

Decriminalisation, if anything, offers an even more complex slate of options. The traffic-fine system in South Australia, the removal of penalties for personal posession of all drugs in Portugal, or the Netherlands' venerable "we just won't enforce the law in these circumstances" – they're all forms of decriminalisation, all quite different. Does the public want the state to maintain a close, even controlling, interest in individuals' drug health, like the Portugese government does?

People who research what are still illicit drugs and their consumption are beginning to talk seriously about these questions. I spoke to Chris Wilkins of Massey University before this week's Media Take recording and he told me he and the university are staging an expert conference in May to discuss exactly these things. I'm looking forward to that.

But ultimately, this is also a discussion that public needs to have. And at some point, whether the government of the day wants it or not, it is a discussion we will have.