The best way to get an idea of Christchurch's ravaged heart, advised David Haywood, would be on a bicycle. I'd like that, I said, and when I emerged from my lecture at the New Zealand Broadcasting School on Monday afternoon, David, Bob and Polly were there with the bike.

Jen's helmet looked like a miniature comedy hat on me, so I opted to just wear a beanie and David's visibility vest. The bike was ideal for the job: sturdy and comfortable. Three months and one day after the February earthquake, I pushed out of the car park.

The broadcasting school is on Madras Street at the north end of the Polytech campus, and immediately to the south of the CBD "red zone". It feels grim this side of the line. Were it not for rubberneckers, businesses along St Asaph Street would have no foot traffic. It doesn't feel like somewhere anyone would go to purchase furniture, or a new car. The Polytech students who used to flow down High Street, head away. Hopeful sale and lease notices suggest property owners want out. And at the corner with Madras, there are signs like these tied to the fences. 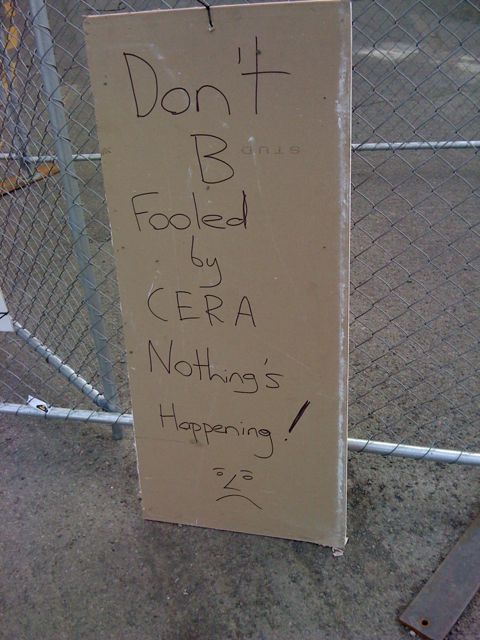 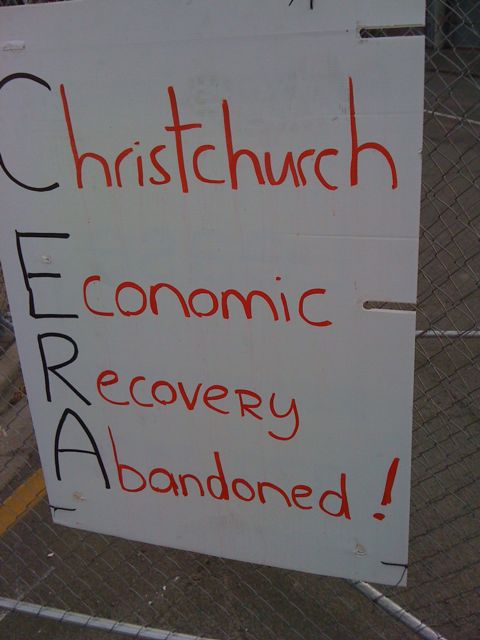 And it's true that there is little visible activity, let alone urgency, behind the fences. Commercial terraces sit denuded of their brick facades, their furniture exposed. More modern office blocks have popped out a quarter of their windows. The Grand Chancellor hotel leans like a drunk. Many other buildings look frustratingly fine. Nothing moves.

Further on, around Oxford Terrace, there isn't even the noise of cars; there are more people on foot than there are behind the wheel. The bars of The Strip stand mute. I stand looking over the Bridge of Remembrance with two local women who are talking to each other about how ridiculous it is that people who need it can't get access to the other side of the river.

From this point, the damage spurs west, manifesting in munted mansions, the Arts Centre and, surprisingly, a few more modern blocks. It's still possible to ride under Radio New Zealand's building and in to its offstreet car park, where a handful of windows have come down. On the corner of Cranmer Square, I see the first example of a particularly depressing phenomenon: a handful of occupied dwellings amongst a greater number of abandoned and broken ones. It must feel really weird to live like that.

I duck in to Hagley Park. It is in classic form; the low, piercing light catching the trees' autumn livery. But there are precious few people. The 30,000 people who no longer come to the Christchurch CBD include walkers and cyclists.

Back along the fenceline, a middle-aged workman takes pride in showing his younger colleague the smooth repair job he has done on a half-metre section of the gutter in front of the casino. It seems a preposterously small victory -- but what do you do?

The Peterborough St boundary is as desolate as the south fence, but more lyrically sad. Lovely old houses are uninhabited; condemned by the colour of the infernal notices stuck to their front doors. Ceiling panels lie where they fell inside the Convention Centre. At one point, extraordinarily, two damaged houses seem to part to reveal a church, its walls blown out and its pipe organ exposed to the weather.

Passing Colombo Street, I pause to look over at Whisky Galore's former premises. A digger is digging out its guts from behind, slowly. The near-Biblical miracle of September -- when just one bottle fell, and another was still vibrating on the edge of its shelf when Michael Fraser Milne got in -- was not repeated in February. But they have been able to go in and get the most valuable of the surviving whiskies, and their offsite warehouse was undamaged. You can still shop online with them.

An older man riding in the opposite direction down Peterborough starts shouting at me for ambling along on the wrong side of the road. "The roads are open for us!" he declares. I understand his point -- it's an actual city, with rules, take it seriously. But his and mine are the only vehicles on our block.

I rejoin Oxford Terrace, where there are more shocked clusters of empty houses along the Avon. And the brilliantly munted Holiday Inn, which, even by the unfortunate standards of the central city's hotels, looks messed up.

By the time I'm looking at Avonside Drive, I realise that I might as well just ride over to David and Jen's house, and I call David to tell him so. But Avonside Drive turns out to be interrupted today, by men addressing a massive hole. I track back a little, cross over and ride up the erupted River Road until it I pass David and Jen's house and it seems to prudent to try and find out whether I'll be able to cross back any time soon. The first two workmen I try -- their truck has pumping equipment -- don't know (I suspect they're not from around here) and point me to their mate, who tells me not to bother. I ride back and find an easy detour.

I'm relieved to be able to tell you that David and Jen's house is okay. Which is to say, the back of it has basically broken off, leaving the spare bedroom unsuitable for guests, and the toileting arrangements are improvised. But I look forward to one day enjoying the shade of the tree planted in the Special Patch for Peeing On, on which I peed.

I can understand that the house's present infirmity would be an insult to an engineer such as David, but it's still their house, and they are living in it. David estimates that only one in five homes in the neighbourhood are currently occupied. The river that lends its name to the suburb is slow and opaque and smells of sewage.

The day before, we'd gone out to Sumner, and in the evening I hung out with Emma and her family, which was really nice. There was one very small tremor. I felt the wave ripple underneath me and a ceiling beam complained. I looked over at Emma. She nodded.

I didn't get to the eastern suburbs yesterday, and the north-west suburbs where I grew up seem oddly untouched; the damage begins to manifest where Memorial Avenue ends. Elsewhere, the piles of silt have been removed, as have some of the most ravaged properties, and the ruptured roads provisionally patched up. But tracing the fenceline around the CBD was a profoundly sobering experience.

The stunned silence there gave me, I thought, some idea of how people affected by the earthquakes must feel. The magnitude of the rebuilding required is hard to grasp. The appointment of Roger Sutton to lead CERA seems a good sign, but I would like to be convinced of the vision of those with political responsibility for the task. So, clearly, would the people of the city. This isn't just their problem, though. It belongs to all of us.