Let history record that my first ride on an e-bike was home into a stinging westerly squall. And that I was duly soaked.

I've been trying out electric bikes as part of a deal with Mercury, whose campaign has, I am hearing, changed the game for cycle retailers by offering a subsidy on e-bikes for Mercury customers.

The thing about bike shops is that although they have to carry a lot of expensive stock, they don't actually sell all that many bikes – as few as one a month for small shops. Right now, there are stores selling an e-bike a day. And for some, it's all they're selling.

So Mercury and its agency deserve a lot of credit for a campaign that is actually creating positive change. More so given that the campaign complements an internal strategy to progressively replace Mercury's company fleet with electric vehicles.

Although I ride a bike regularly for local (and sometimes not-so-local) journeys, I didn't really know much about e-bikes. Two weeks ago, I actually thought they charged when you were coasting downhill – that they were, at least in part, gravity-fuelled. Some models (with direct-drive hub motors) in fact do do this, but in general you plug them in to your household power supply and charge the battery when you're not riding.

Anyway, I was keen to try this thing. My "commute" is from the kitchen to my home office but I try and replace car trips with cycle trips as often as I can. Yet there are times when I don't cycle because it's too windy, or because I don't want to turn up sweaty to a meeting, or simply because it's too far and I'm too tired or I don't have time to ride where I want to go.

After that fateful journey home from Freeman's Bay I've spent the past week riding another of the range covered by the Mercury promotion: the SmartMotion eCity. This is similar to the bike you might have seen your postie riding. Here's me riding the one I had. 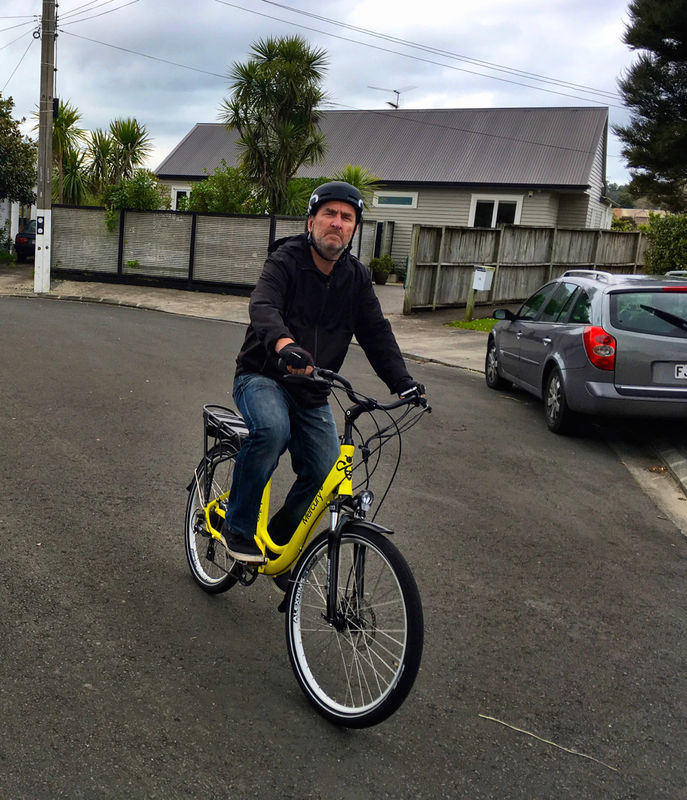 This isn't a bike for ducking and diving – it's a comfortable, upright step-through style bicycle suitable for commuting or local journeys. And it really is quite beautifully designed. There are many cables on a bike like this, but here they're nicely integrated and tucked away. 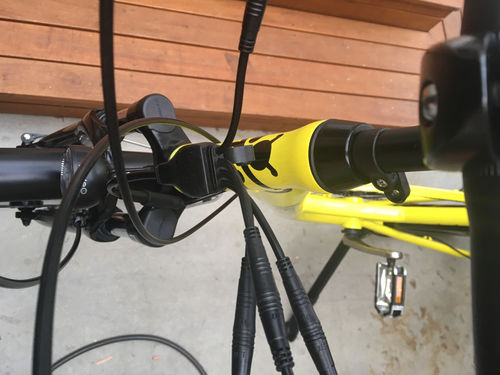 There's a solid kickstand, a chain guard and mudguards. There's a built-in rear-wheel lock and on the battery there's a waterproof USB port for charging your phone (or, if your aim is to usher in the Hipster Apocalypse, vape battery) while you ride. The wattage is high enough to charge your device very quickly.

Oh yeah, the battery: it's rack-mounted (ie: on the rear carrier) rather than integrated into the frame. This makes it easily-accessible – you don't need to remove it to charge it – but it does make your centre of gravity a little higher than optimum. Personally, I didn't have any obvious problem with balance, even when homebound from quaxing with a full pannier. The bike, like all e-bikes, is heavy at 25kg, but I wasn't conscious of it feeling top-heavy.

Now, riding ... this did take a little adjustment, and I wonder if e-bikes will feel stranger at first to regular riders than to people just giving it a go. The eCity uses a cadence sensor to tell when it should be delivering electric assistance to your legs. What this means is that the assistance is triggered when you're turning the pedals. On the eCity you set the level of assistance – from 0 to 5 – via the little thumb-operated panel on the left of the handlebar. A flick on the same panel toggles the integrated front and rear lights on and off.

I found it congenial to ride around on a pedal-assist setting of 2 or 3. Depending on the conditions, it was easy to ride at a constant speed of 20-25km/h, which is what these bikes are really for. But for science reasons, I did a shopping trip via Motions Road, which is what we cyclists call "seriously fucking steep".

At maximum pedal assist and in the lowest of eight gears it still wasn't exactly easy. I also experienced one of the drawbacks of cadence sensors: because they monitor you cranking the pedals, things can go a little dead when you're on a very steep hill and you're not cranking the pedals as fast. But was it easier than slogging up Motions Road under your own steam? Absolutely. And on a more typical climb – say, Chinaman's Hill up from Western Springs – it's basically a breeze.

I toggled around the pedal assist levels for a day or two until I started trying the throttle, which is integrated with the left handlegrip. Hallelujah. I was a cycle courier on London many years ago and on my unpowered bike (a fairly stripped-down hybrid with Schwalbe Marathon street tyres) I'm used to accelerating by using my own leg power when I need to get in a gap, get clear of traffic, whatever. This doesn't work so well on a cadence-sensor e-bike.

But the throttle? Oh, the throttle. This is how you do it. If you need a quick start away from the lights or to accelerate out of a corner, the throttle is how you do it, because you get the boost before you get the pedals turning. It's actually fun – so much fun that it's quite tempting to not pedal at all and toodle along on electric power (this will run your battery down quite a lot faster than pedal-assist, needless to say).

There is another kind of sensor: the torque sensor, which is a feature on more expensive models in the Mercury-subsidised range and apparently offers a more natural feel for experienced cyclists (in that the assist increases when you push harder). I'll write about one of those when I get one.

But for now, as I had been assured, the SmartMotion eCity is a solid, very nicely-designed bike. At $2549 with the subsidy for the bigger-battery version, these things aren't cheap. They cost more than a crappy second-hand car might  (although at around 10 cents per hundred kilometres they're vastly cheaper to run) but they do change things for people who want zero-emission transport and a little exercise without having to embark on the full pomp of unpowered cycling.

What I did find on a couple of journeys into town was that without really thinking about it I was getting to my destination much more quickly – in as little as half the time, in ordinary clothes. In a way, I think some of my obsessing about acceleration was beside the point. An e-bike isn't ever going to be as nimble as some unpowered bikes are. But making a journey in half the time (or going twice as far) for the same effort? Yes, that is very appealing.

This post appears as part of a commercial agreement with Mercury Energy, who viewed the copy before it was published. 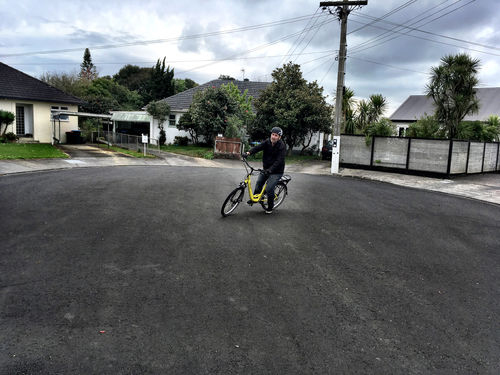