The Trons, Hamilton's robot band, don't talk to the media. Or, indeed, speak your human language at all. But on the occasion of their eponoymous debut CD/DVD, we were able to prevail on their manager, Greg Locke, to give us some rare pictures of the Trons in action, along with a commentary. 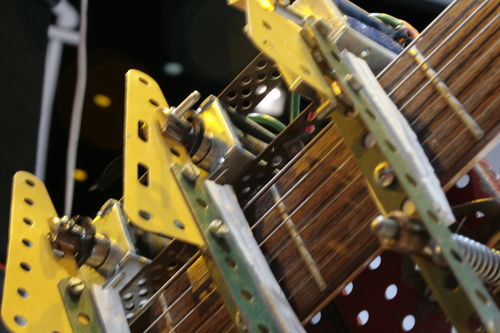 This is the chord hand of Ham, the rhythm guitarist. The guitar has a simple open D tuning, and the three bars means he can play F G and A as well. The solenoids get fed 12 volts and grip down on the strings to change the chord. They all react slightly differently and give different sounds. The F chord seems to put it out of tune a bit so that is mainly used on Sonic Youth type numbers. The strumming is done by motors with another linkage at the bottom. There is also a mute to deaden the strings. 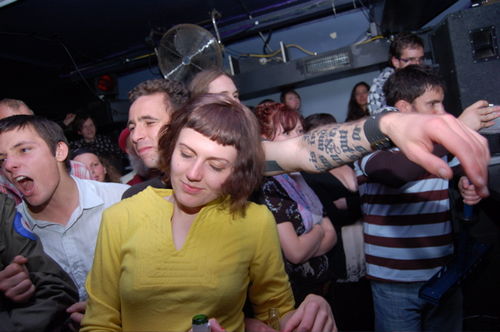 From the Trons' first gig. It was the last night of the Hamilton Ignition Fringe Festival 2008. The Trons played fourth of five bands and the place was packed. Snakebeings, who directed a lot of the video on the album, had his band “Bingodiziac” which was really weird, but people seemed to take it all in and go with it. We had Suicide and the like playing between bands and there was this group of people turned up with cardboard boxes like robots on their heads. The lights guy had plenty of smoke machines and the like, so it was all quite surreal. There was some stage diving and it looked a bit dangerous for helpless robot musicians, but they held their own and sounded excellent. The night finished off with Disasteradio, which capped it off brilliantly.

The Trons Big Day Out 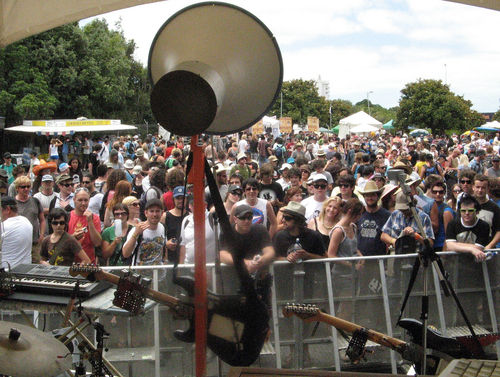 This was Auckland 2009. It was only 2008 when the Trons were first built, so it was pretty cool to make it to the BDO just a year later. Always a great event, seeing bands like the Stooges, Hole, and The Nothing over the years. The madness of the crowd happens behind stage too, all the noise, and the rush. The crowd was milling around before the Trons started and I had to keep retuning the guitars because of the heat and sun. But all worked fine when they started up … a solenoid playing a single string on a beat up guitar through an old ghetto blaster then amplified up to 80,000 watts. The Trons had two sets and standard rider was four beers per member per set, so they got 32 beers! 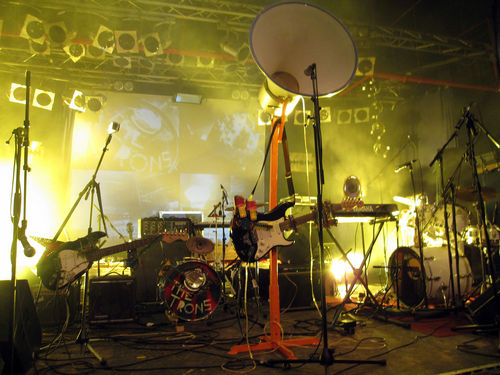 Support for Jimi Tenor during the Europe Tour 2009. It was in this giant old WW2 bunker. The walls were two metre thick concrete, with another two metre thick shell around the outside. Inside it was like a different world isolated from all outside vibrations. The concert was on the third floor, down an alleyway, up lots of steps. As a support band there was only about 30 minutes to get all robots on stage, wired up and sound checked. Then a drum motor burnt out -- so a frantic rewiring, and more up and down steps. But they fired up on cue to an audience who really didn’t know what was about to happen. Went great, the Germans seemed to get into the band heaps. And Jimi stole some bit off the band after to help activate a super long clarinet he had that would do subsonic reed noises. 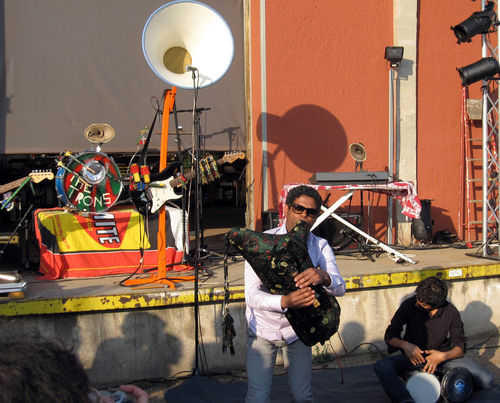 The Trons had been invited to play in Austria as part of the 2009 European Capital of culture festivities. Every year one city in Europe is chosen as an artistic hub for cultures around the world. At this particular event in Linz there were around 20 musical groups from Africa and Asia etc playing along the banks of the Danube. They were moving along the river and when one group would meet another they would often try to jam. Many of the musicians had never left their hometown, and here they were in a city thousands of miles away in a spontaneous collaboration with a completely different culture. This was probably one of the strangest combinations though. The Trons were there mainly for the after party, but we fired them up for this event too and this Nepalese duo got into the machine rhythms big time. The tulum which is like a rudimentary bagpipe had a drone which we were able to tune to on the single string guitar.

Would you like to know how the robot band from the city of the future actually sound? Pop over to their Bandcamp. Or just press play here:

And if this lights up your LEDs, well, you're in luck. Because Hard News has two copies of the Trons CD/DVD to give away to the readers who can write the best single-paragraph fanfic featuring Ham (vox/guitar), Fiona Farfisa (keyboards), Swamp (drums) and Wiggolowski Motor-Finger (guitar). Off you go, then.