As every good geek knows, when a Starfleet crewperson has a drink, he or she -- usually -- chooses synthehol, which "appears to have the same taste and smell as 'real' alcohol to most individuals, but none of the deleterious effects associated with alcohol for most humanoids, such as debilitating intoxication, addiction, and alcohol poisoning."

It's the perfect layback after a hard day of boldly going where no one has gone before -- unless, of course, you fancy that there's something more authentic and pleasant about proper, toxic booze.

By harnessing benzodiazepines like diazepam, the chief ingredient in anti-anxiety med Valium, Nutt sees a future of drinking without becoming addicted, belligerent or — and here’s the kicker — intoxicated. Using one of thousands of possible benzos, researchers are working to tailor a colorless, tasteless synthetic that could eventually replace the alcohol content in beer, wine and liquor.

Drinkers could toss back as many glasses of the swill as they want but would remain only mildly drunk from first drink to last, keeping good-timers within legal limits whether they like it or not. If one did find the buzz too intense for a particular task — say, driving home after a long night at the pub — those warm feelings of inebriation could be instantly turned off with a simple antidote pill that mutes the synthetic’s effects on brain receptors.

Oddly enough, I was thinking just a couple of nights ago that it was a shame there was not an evening tipple that might make me feel nice and warm and relaxed after dinner without the implications for personal health involved in few single malts. At my age, you have to think about your drinking, and contrary to popular belief, drinking wasn't going to do my heavy cold any good at all.

Then I saw this Guardian Science blog, an excerpt from Nutt's new book,  Drugs Without The Hot Air , in which he expands on the idea. He proposes vaccines against addiction, perhaps refined from drugs like psilocybin and ibogaine ...

... psychoactive substances found in plants, [which] are non-addictive themselves, and seem to be effective at helping people overcome addictions to other drugs such as opiates, alcohol and nicotine. Synthetics may be developed that have more predictable and less harmful effects.

At which point ye olde buttload of personal freedom issues comes tumbling down the pike. What say a citizen does not want the vaccine? Does the state apply it forcibly? Or deny further treatment and support until the cure is taken?

"We may be able to make better recreational drugs too," Nutt continues, noting his own work with benzodiazepines and speculating that they could be "switched off" at the end of a night out so the subject could safely drive home.

Or perhaps, he says, alcohol itself could be modified, "to make it safer and more pleasant," targeting only the receptors that make you feel relaxed and happy -- and not the ones that leave you vomiting in the gutter at 2am in High Street.

It's very hard not think eugghh -- alcopops at this suggestion. For many people, part of the appeal of alcoholic drinks -- and cannabis for that matter -- is that it has come from the earth, with all the mystery and variety that reflects into the end product. I currently have a bottle of the Bruichladdich Rocks, which the label says is "an innovative single malt ... [that] uses water that has filtered up throygh the oldest rocks in the whisky world -- the curious 1.8 billion year-old geology of the Rhinns of Islay."

You're not going to get that out of a lab, are you? On the other hand, the idea refocuses us on the fact that alcohol is a drug.

I greatly respect Nutt's courage in holding to the view that taking drugs for pleasure, relaxation or dancing is not a moral issue. I've come to the view that a sensible drug policy may have to pick winners -- may have to bless drugs whose design precludes overdose, addiction and long-term health effects.

But seeing it written down makes it hard not to think of this: anyone for a nice, warm cup of soma?

Addendum: Here is a picture sent to me this morning by the Manukau police, attached to a press release release headed "Counties Manukau Police hit drug 'jackpot'". These pills are what the police now call "new psychoactive substances", which are in the market now because law enforcement has made it economic or inconvenient to supply better-known psychactive drugs, such as ecstasy. They were probably sourced legally in another country where the drug laws are less comprehensive than ours. They may or may not be "better" or "worse" than MDMA -- but that's not why they've been selected. They're present because the other ones have been driven out. They were seized along with some fairly scary-looking guns. And this will keep on happening for as long as we wish to pursue our current practices. This, too, we need to think about. 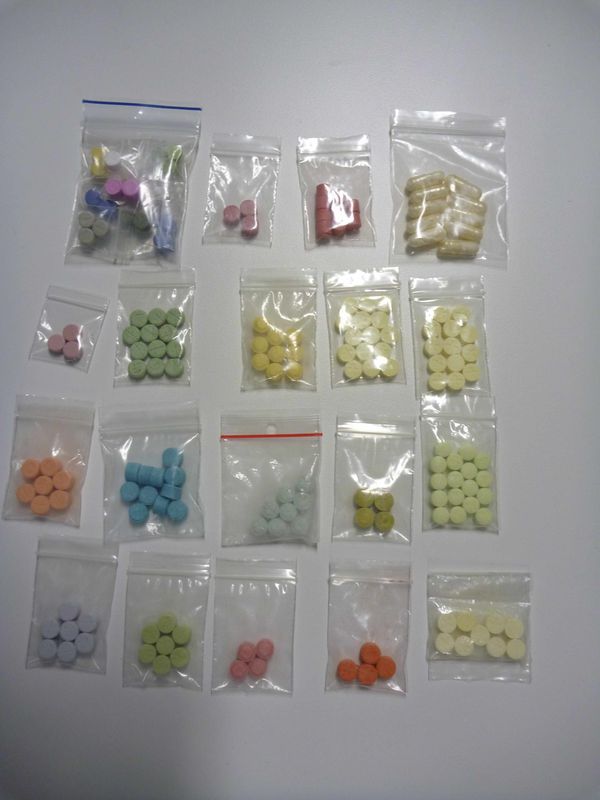