Nate Silver, the media star of the last US Presidential election, launched his own fivethirtyeight website this week, extending one news trend -- data journalism -- and setting the pace in another -- the richly-backed “personal brand” journalism startup. Both political pundit Ezra Klein (with Vox) and the testy Glenn Greenwald (with First Look, backed by libertarian eBay billionaire Pierre Omidyar) have their own bold new ventures in the works.

They probably won't be as poppy as fivethirtyeight. It's not a specialist news site as such: it seems set to cover a wide range of topics, most notably sport, which is where Silver's roots are. But it will cover them in keeping with the guiding principle of of "how would Nate Silver approach this?"

Thus, at the time of writing, the fivethirtyeight front page includes a lead whose headline asks How Statisticians Could Help Find That Missing Plane and a story headed So You Just had Sex, How Many Calories Did You Burn?, which explores the basis for the old truism about sex and cardio. The latter comes from the site's DataLab section, which Silver says is the home for the venture's "shortform" content. You might also call it "the Buzzfeed section".

Because while all the above ventures are brightening the career gloom of journalism by very publicly hiring, the catch is that you pretty much have to be a bit of a star already to get hired. But you know who's really hiring in the US this year? Buzzfeed.

The archetypal clickbait factory has been getting serious in the past few months, recruiting  not only the Wall Street Journal's data journalism guy, but foreign reporters in the kinds of places from which traditional news organisations are withdrawing under budget pressure. This NPR story from December is interesting:

Jonah Peretti, BuzzFeed's CEO and founder, points to the site's creation. "The joke used to be that you'd share what you had for lunch on Twitter and Facebook, with pictures of your friends getting drunk," he says. "Then cute animals and jokes and humor and Internet geek culture started to emerge on those platforms, and there's where BuzzFeed really got started."

But then, Peretti says, the Arab Spring broke out and played out on Facebook. People took to Twitter to monitor breaking news. BuzzFeed decided to hire reporters — not a cheap proposition — as it decided that was necessary to draw certain kinds of news readers and advertisers.

At the same time, Buzzfeed's hundreds-strong editorial team also includes a team of people whose job it is to make animated gifs. Because kitty gifs don't just make themselves, you know. It's all part of a sophisticated strategy of not only providing what people want, but tailoring the offering to the social platform on which it's to be received.

Before you sneer, bear in mind that this is actually a better thing than much of what we've endured for the past few years: parasitic news aggregators like Michael Wolff's crappy Newser or the SEO'd-senseless Huffington Post, or out-and-out peddlers of truthiness like the Drudge Report and Breitbart. Maybe some good will come of all this, maybe there's a way forward here.

The thing will be to see if this new wave can overcome a dynamic identified in Pew's new, brief report on Pathways to Digital News, which explains that news sites whose traffic comes through search or social don't get nearly the same level of engagement as sites where people come in directly through the front door. 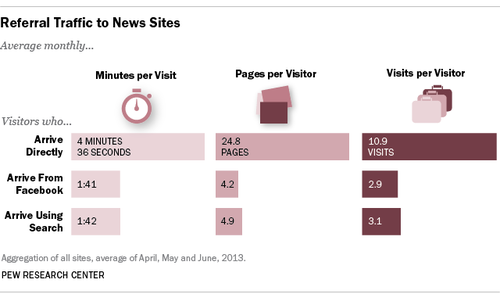 Direct visitors stay longer, read more articles and come back more often than those who've been lured by a Facebook teaser or Googled up some news -- which is why traditional news publishers have a better shot at actually getting readers to pay or contribute than any come-lately clickbait site.

This is why those same news publishers have often bitched about the drive-by traffic generated by third-party aggregators. Meanwhile, Buzzfeed and its kind have made a virtue of the ephemeral by finding ways to constantly be part of the conversation. How will that work with proper news?

New Zealand lacks the scale and the ready capital investment (prove me wrong, investors! click the little email icon at the bottom of this post!) to truly follow this trend, but you can see elements of it both in the newspaper websites and in the more hyperactive political blogs, which tend not to let having nothing useful to say about a topic get in the way of firing out multiple posts and advertising them hard on social platforms.

Public Address, ironically, is more like the newspapers than those blogs. When we could afford to buy the Nielsen surveys, Public Address consistently topped rankings for time spent on site and on each page, and, mostly notably, engagement as measured by active contributions to the site. It's a precious thing.

But none of us can afford to ignore the ways in which people want and are able to consume stuff. Nearly every post that goes up here will be plugged on Twitter and Facebook and in our dear old mailing list. I try and be worth a follow on Twitter not just because it's good for the ego, but because having 14,500 Twitter followers is really useful when you want to tell people about your main stuff.

We're experimenting a little with this on Audioculture, where I help out. That site's deep, comprehensive articles are its soul, and there's a core audience of thousands who roll up for that stuff. But it's also useful to have a little dabble in the momentary.

You won't believe which clean-cut popstar had to pretend he'd tried LSD after inadvertently recording a song about it!