Journalism, we like to say, is the first draft of history. But sometimes it's more apt to recall the quote in its original form. Washington Post publisher Philip Graham, in a speech to Newsweek's international correspondents in 1963 in London, said:

So let us today drudge on about our inescapably impossible task of providing every week a first rough draft of history that will never be completed about a world we can never really understand.

The full quote takes the more common one down a peg or two. It acknowledges that much of the work of journalism is, indeed, drudgery. And it grants that the first cut will be rough and we'll never truly get it right.

We saw the ordinariness of reporting, even in an extraordinary situation, in the unedited footage that 3 News put to air last Tuesday. Amid the horror and confusion, Hamish Clark and Natasha Utting wrote down the names of the people they talked to, first and second, and checked the spelling. It's the most ordinary thing you can do as a journalist.

Utting visibly recoiled at one point when she was told how many people were still inside the Pine Gould building. We recoiled with her. Clark seemed to just walk from place to place, finding out what he could, talking to the cops, getting people's stories, doing his job.

This kind of work is quite apart from the heavy presentational style we've come to expect from TV news in recent years; a style in which we're implicitly invited to treat the reporter as the story; the style of the pointless live cross.

It's hard to imagine that anyone could contrive a pointless live cross from a city still shaking and crying, but we got close a few times. One young TV reporter had a trainwreck of a cross on Wednesday evening: he forgot what little he had to say and his powers of description failed him. He shouldn't have been there.

He wasn't alone. If anything, the challenges of this coverage showed the value of maturity and experience. The 3 News reporters out in the hour after the quake, Corrine Ambler on One News, and various others served the first rough draft well.

And it was rough, and even flat-out wrong at times. I felt bad about relaying reports from other media that proved to be baseless: that Christchurch hospital had been evacuated, that the airport's control tower was down. In a hurry, I didn't think hard enough before linking to a heart-rending story posted to a blog, that I can see now was a hoax. For hours after the blood service had declared it didn't need donations, TV3 was urging people to donate blood. But these things will happen.

In case you were wondering, yes, someone has already wondered whether Twitter is the first draft of history. Matthew Ingram said that back in 2008, after the disastrous 7.8 magnitude quake in China:

Twitter became one of the main sources of on-the-ground reporting — even before CNN started picking up what was happening, and with more personal detail. During such times, Twitter seems like a crowd-sourced reporting tool, much like what NowPublic.com has created but with cellphones and 140 character messages as the medium.

In any disaster, one of the first things that people look for — not just journalists, but readers too — is the eyewitness account, the first-person description, the man on the scene. Whenever something like the earthquake happens, thousands of editors and producers at newspapers, radio programs and TV networks clog the phones trying to reach someone, anyone, who can provide a personal account: they call homes, schools, stores, friends, distant relatives. What was it like? Where were you when it happened? What happened next?

Twitter is able to supply all of those things — and it’s also self-directed. People can post messages about whatever they wish, rather than answering only the questions that a producer asks them. In the study I wrote about recently that looked at Twitter and Facebook and Wikipedia as disaster reporting tools, one of the comments about the California fires was that the media focused on celebrities and how they were affected, but Twitter and other sources gave a more complete version of events and how they were affecting everyone. Paul Kedrosky calls it the democratization of headline news.

At the risk of tying all major human events to Twitter: yes, it was a remarkable thing to have. It was the way I found out the fact of the earthquake, the first reports of terrible damage, the welcome news that friends were safe, the advisories as various services got online. And this image of the CTV building, part of a rough and remarkable series taken by Laura Campbell as she found her way home, told everyone who saw it that something ghastly had happened: 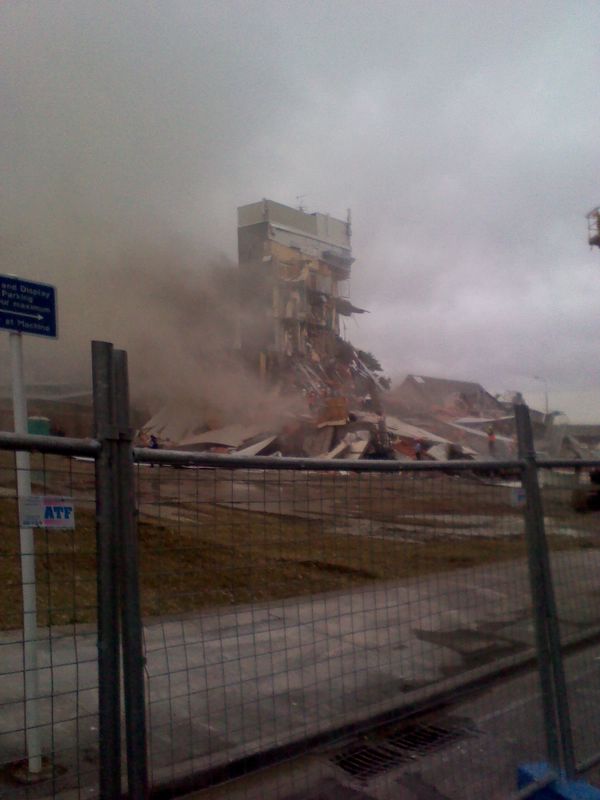 But behind all that, there was the role of the mobile phone. Two decades ago, who could have thought that people trapped in ruined buildings -- in some cases, badly injured -- could have reached their rescuers by texting home to other countries?

Meanwhile, Michael Laws might be seen to lack a certain authority when he calls on the news media to show good taste and decency in their work, although his personal capacity for contempt seems fully intact.

It is the job of photographers, camera operators and reporters to bear witness, to tell what they see -- and the job of their editors to decide what is proper to show. When unedited video was going to air, the editorial step was removed and we saw some things we perhaps should not have. But for those of outside Christchurch, desperate to understand what had happened, going to air was the right thing to do.

Since then, the New Zealand Herald has pushed the boundaries of good taste on two front pages (by contrast, the Herald on Sunday had an unaccustomed fit of decorum) and some scenes have been shown too many times on TV, but, in general, it could have been worse. In a situation as bad as this, the temptation to overdo it diminishes. It's worth remembering that Susan Wood once went on TV and described Auckland as a "post-apocalytpic landscape" -- because the electricity had gone off for the day.

Some people were offended when advertisements started creeping back into the TV coverage, but there's a commercial reality there. Covering the disaster has been extremely expensive for both major broadcasters in itself; turning off the revenue that keeps TV on air in a difficult economic environment was unsustainable. Given that this was already a year of major news events -- from the Urewera trials to the Rugby World Cup and the general election, it's reasonable to conclude that it's going to be particularly tough on newsroom budgets.

By general acclaim, Radio New Zealand has responded extremely well to the crisis, demonstrating in the process why we need public broadcasters. What has been less well known is that Christchurch staff had to leave their building and have been unable to return. They've been working from a motel since the day of the quake.

In one sense, the fact that we weren't told about this was admirable: they didn't make themselves the story. In another it led to a flurry of  rumours about the state of the building and, in particular, the New Zealand Sound Archives. When people on the ground could see the building was empty and damaged, they were inevitably going to speculate. Communications manager John Barr finally sent the following in an email to staff on Friday:

There is currently some chatter and discussion on Facebook, Twitter and Blog sites suggesting that the Radio New Zealand building in Christchurch is unsafe and in danger of collapse. We do not believe there is any substance to these rumours which started circulating soon after Tuesday’s earthquake. We have photographs of the inside and outside of the building, including the front entrance, internal corridors, external walls, panels, and air conditioning units under the building.  The following information is a status report as of 8 pm Friday 25th February:

• The primary concern is for our staff. We can confirm that all have been contacted and are safe.

• As previously reported, the Radio New Zealand building is still under power from our own generator which continues to function. Environmental controls in the archive are still active. We have diesel for another 7 days, and should be able to replenish this. All Archives IT infrastructure (digital audio storage) was shut down in a controlled manner on Wednesday.

• We have viewed CCTV security camera footage from inside the building. The offices are in disarray, as would be expected. The state of the archive material is unknown - but because a lot of items moved in the September quake, we would expect the same to have happened this time.

• There are some minor cracks in some external concrete beams although it should be noted that some of these pre-date the recent earthquake.

• There is an external lift shaft attached to the building.  The base of this has shifted slightly due to ground subsidence and one point of attachment to the main building has come loose.

• We are unsure when Radio New Zealand staff will be given access to the building and our offices. We understand that there is still some danger from damaged buildings in the immediate vicinity of Radio New Zealand House.

As you might expect, we will be covering the coverage on Media7 this week. We will have Andrew Holden, the editor of The Press, and we're hopeful of being able to fly up someone from CTV. Also, David Haywood will be joining us.

If you'd like to come along, we'll need you to come to the Victoria Street entrance of TVNZ by 5.30pm on Wednesday. As ever, a little email to let me know you're coming would be handy.