Robyn Gallagher celebrates 15 years of writing her journal/website/blog-before-there-were-blogs with some useful thoughts on the practice and principles of writing for yourself online. It really is worth reading.

She has the knack of writing beautifully about plain things. In an era where everyone and his marketing consultant has a blog/Facebook/Twitter/Tumblr thing, the measure of Robyn's prose is still a welcome thing.

She tells me she's preparing for a big new project. Really big:

I have set myself the challenge of watching every NZ On Air-funded music video made (or at least all the ones available online) and blogging about them. There's over 2000 videos, so it's going to be a long-term project.

She also reminded me that next year will be the tenth anniversary of this website. Gadzooks. I might also observe that this year is the 20th anniversary of Hard News, my own blog-before-there-was-a-blog (two paragraph history here). I had set myself the challenge of editing down at least the radio era dispatches into a book for Christmas, but to be honest, I'm tired as it is. I'm having a rethink about what I can do.

It would be fun to bust out a "GOOD DAY MEDIAPHILES" again ...

So last Friday I tweeted A. Skillz' irresistible new remix of Marlena Shaw's version of 'California Soul' -- and by Monday it was top of the Twitter chart on Hype Machine. Coincidence? Well yes, quite obviously -- but it's a tune you'll want to turn up loud and move to. Well, I did -- and so did the lovely SweetMix Kids. (Note that the also-very-good Diplo/Mad Decent remix of the same track is still kicking around.)

Bonus! I have two CD copies of Pitch Black's intriguing Remixes and Rarities album to give away. Just email me with "Pitch Black" in the subject line and I'll have random.org pick the winners. But be aware that I won't do that until Tuesday, when I get back from seeing friends and family in Wellington. If you want that sucker sooner, head over to their Bandcamp page, where you can preview all the tracks and buy the release. Simon Pound and I also talked to Paddy Free about the release for Public Address Radio.

Extra bonus! I also have two CD copies of the self-titled debut album by Unknown Mortal Orchestra, the new band of former Mint Chick Ruban Nielson. Pretty amped for this one myself. Again, just email me with "UMO" in the subject line and randomness will make its call.

And, finally, the weather might be a bit shit, but I still wish I was at Glastonbury. There are literally dozens of acts I'd love to see playing this weekend, from Pretty Lights to Raghu Dixit. And I think this must be a record showing for New Zealand artists too: The Phoenix Foundation, Ladi6,  Shapeshifter, Electric Wire Hustle, Benny Tones.

The Guardian is liveblogging and I expect there'll be some unofficial streaming jiggery-pokery to be had.

I would also like to emphasise my very strong approval of this t-shirt, as created and  modelled by Jude Abbott from Chumbawumba: 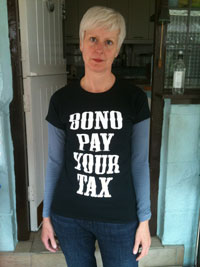 And bear with me while I recall my first Glasto, 1987.

And Elvis Costello played a solo set, with a beatbox for company, then came out with The Attractions and played a whole other set that kicked off with this:

It sounded better if you were there, of course. It always does.