It seems a long time since last week. Last week is another country.

Just before midnight on Saturday, I was on the balcony of my room at the Museum Hotel in Wellington, rolling a glass of Talisker in my fingers, enjoying simply being awake and not having to talk to anyone.

An hour or so before, I'd finished hosting the Onyas, the Webstock crew's industry awards, at the Town Hall; the final gig in my annual February crush: Foo Camp, Webstock, Onyas.

As usual, there had been too little sleep, too many ideas to process at once. Foo was great: I left with three concrete to-do things. Pirate Bay co-founder Peter Sunde missed his plane(!) for that, but it was nice to meet him and his brother Mats in Wellington and, without really having intended to, ask him what he thought about Julian Assange ("an asshole" and "a PR man" who took credit for others' work, he said).

And I really appreciated the incorporation of more cultural content into the Webstock lineup: Understanding Comics author Scott McLoud's Friday presentation was revelatory, and the presence of musicians Amanda Palmer and Jason Webley gave the conference a flavour it's never had before.

Amanda Palmer herself, I found fascinating: it's as if she's perfectly equipped for the evolving music business. It's one thing to be great on Twitter; quite another to have the technique and emotional intelligence to hold 300 people in a public square with nothing more than her voice and a battered ukulele.

Her new song, 'Map of Tasmania', which contains the refrain "they don't know that we are the media", sings the praises of un-Brazilianed pubes. If I had a teenage daughter, I'd be very comfortable with her listening to Amanda Palmer.

Amanda played us out of the Media7 Webstock special with that song ("this song needs a drum machine and we don't have one -- can you guys clap?"), as part of a thoroughly profligate lineup including Twitter creative director Doug Bowman, Peter Sunde, Tumblr and Instapaper founder Marco Arment, all-round web wag Tom Coates and Scoop's Alastair Thompson. You can see the programme online here.

In its way, the most remarkable event of the whole week-and-a-bit was Amanda's "ninja gig" in Civic Square. Ordained on Twitter a few hours beforehand, it culminated in a raucous version of 'Should I Stay Or Should I Go?' and a spellbinding version of Radiohead's 'Creep', during which I could hear one woman singing beautifully along next to me, and another playing her own ukulele, equally sweetly. (And I don't even really like Radiohead.)

It was suggested to me afterwards that there was groupthink going on at Webstock. Well, no. This week of my year doesn't tell me what to think: it tells me what I need to think about. But yes, there was a big truck of kool-aid backed up against the Wellington Town Hall. People left with heads full of ideas about what they could do, and what they could do better. In the wake of the massive challenge that reared up on Tuesday, that's still no bad thing. 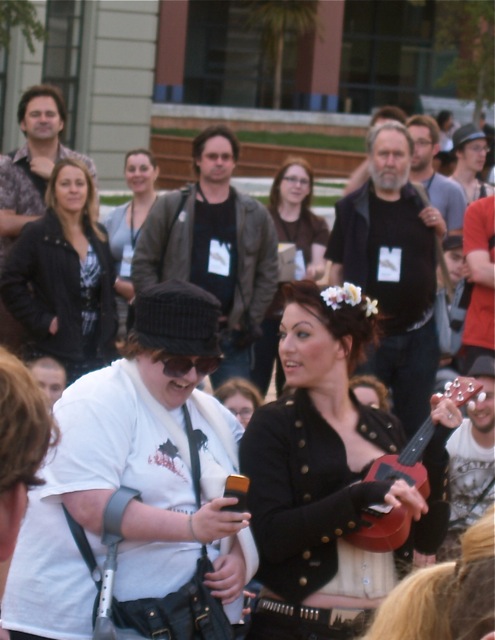 When Amanda needed some help with the lyrics of her song, 'New Zealand' ("can someone Google it for me?"), Ailsa Lipscombe was swift on the draw. [Photo: Kerry Annett] 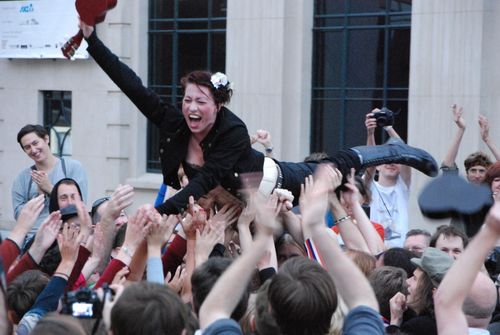 Crowd-surfing at the end of 'Should  I Stay or Should I Go?'. [Photo: Alastair Thompson, Scoop.]

And, finally, the feast of minge metaphors that is the video for 'Map of Tasmania':