There are always candles at the memorial to Jan Palach and Jan Zajic, who immolated themselves in protest at the forcible ending of the Prague Spring in 1968, but there were more there than usual last Thursday when I walked to see it. 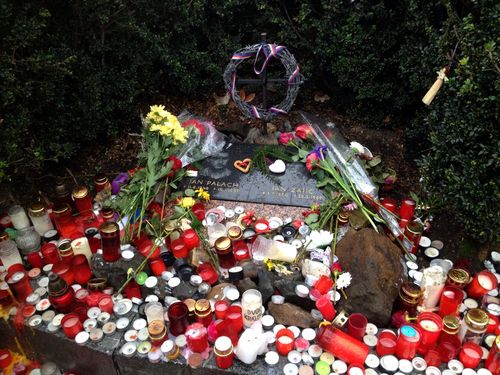 A little further up, at the end of Wenceslas Square, a smaller crop of candles marked another memorial, on the spot where Palach fell burning.

Overlooking that point, hoisted on the Czech National Museum, there was a giant, genial portrait of Vaclav Havel, the Lou Reed-loving poet who became the president after leading Czechoslovakia's Velvet Revolution in 1989, thus ending 41 years of Communist subjugation and clearing the way for a modern Parliamentary democracy. 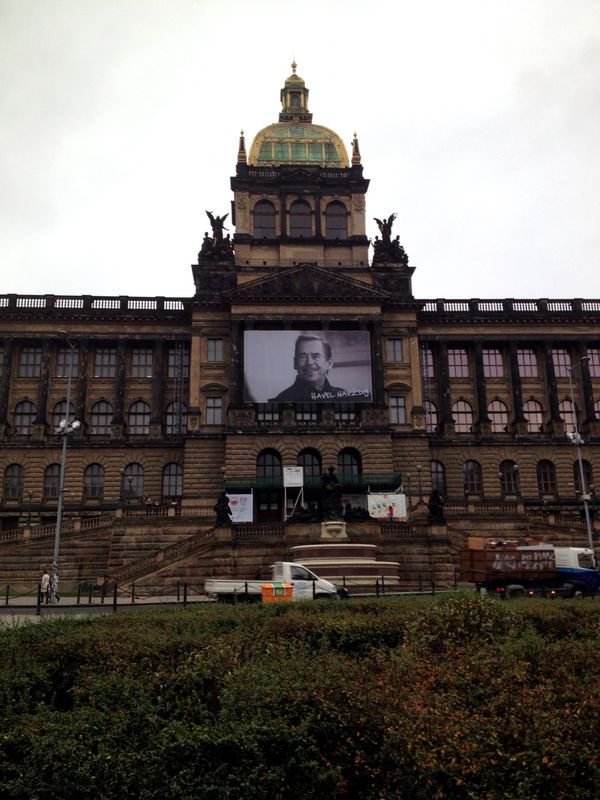 On Thursday it was 25 years and three days since the the Velvet Revolution was sparked by a police attack on protesting students. Back over my right shoulder was Melantrich, where the newspaper The Free Word granted Havel and his colleagues first space in its pages and then a place on its balcony, to address the crowds milling in the square. I thought about doing such a thing as a journalist.

Back over my left shoulder was the hotel where Sir Nicholas Winton, a financial flash harry turned saviour, organised his plot to smuggle hundreds of Jewish children away from the Nazis in 1938 and badgered the British Home Office into terms for their resettlement. By chance, I'd seen the BBC Hard Talk interview with Sir Nicholas, now 105 years old, on the Monday.

Our guide, Marketa, didn't say so, but I got the sense that her guided walk towards our lunch venue, of which you will read in a specialist publication, was more political than usual on account of the anniversary (which had been highly political itself). She told a joke about the Cezch Parliament that I can't do justice to.

She'd been amongst the crowds in the square 25 years ago. She must have been quite young then, and I couldn't quite tell where her own memories stopped and the clarity of the iconic tales of of the revolution -- Marta Kubisova singing the national anthem from the balcony, the appearnce of Dubcek -- began. But it didn't really matter.

Twice, I went to thank Marketa for her account, and twice I pretty much choked up. I was quite undone by it all.

Wenceslas Square isn't really a square and its atmosphere is not entirely civic. It's a broad, somewhat cluttered avenue that shows only fitful reverence to its history. The Melantrich building is now home to a Marks & Spencer and some nice hotel apartments. The monument to Saint Wenceslas, whose feast day is celebrated as the day of Czech statehood, is way too close to a McDonald's. On the way back past from lunch, I heard Lorde's 'Team' blaring from a boutique.

But I suppose you can be a little more casual with some of your built history when you have as much of it as Prague does. Parts of it date back to the original 10th century state of Bohemia. Buildings are even going back in time as their more recent 19th century facades are scraped away. While crowds of tourists gather at the town hall in the city's main square to watch its magnificent mechnical scold of a clock crank out an hourly morality play, the back story is in the other side of the building -- the part that isn't there. It was destroyed by the Nazis as they shipped out in 1945.

Marketa indicated to us where buildings that had lost their character under the Communists had been restored and recoloured in recent years: "They belonged to everyone, so no one took responsibility for them." She has an economics degree from Cambridge.

"What strikes me," I said to her, "is that you are confronted by your history every day in the form of these buildings."

She nodded, but perhaps that didn't seem such a remarkable idea to her. Prague has been at the centre of a Czech state for more than a thousand years. It has been home to a university for more than 650 years. We stopped for a beer at a 170 year-old bar whose beer garden is bordered by the Church of Our Lady of the Snows, which was originally a carmelite monastery begun in 1347 but never finished (again, the story in is in what's not there).

Back at the hotel, I thought of it in the context of Maori, who had no momumental architecture, but still associate everyday places with the historic events that unfolded in them. And who, like the Czechs, have had their sovereignty rudely interrupted and been in danger of surrendering their language.

Empires have come and gone through Prague's thousand years, and the twin insults of the Nazis and the Russian Communists in a single half-century seemed especially acute to me, as literal living memories. But they walk amongst it all, every day. That's what you do in an old town.