As you may know, or have heard, this year's The Others Way festival was quite a party. And I think it's worth exploring why. The bands, of course. The sold-out crowd, certainly. But there's a level on which 45 acts, 13 venues and thousands of people are just so many things to go wrong. The fact that they didn't speaks volumes about the level of insight and expertise that went into curating this thing. I'm pretty much in awe of how right the TOW team got it this year.

There's another thing that made it special. At one point last Friday night I went directly from watching a hugely talented 18 year-old singer to a band led by a man well into his sixties. The crowds around me spanned a similar range. The Others Way, even more than previous years, was a victory of tribe over mere demographics. Students stood shoulder to shoulder with the ministers of Finance and Agriculture. We all knew why we were there and we knew it couldn't be any other place but home on Karangahape Road.

I only got to seven of the venues, but even that made for a busy evening. The Beths at The Studio was a happy way to start, not just because there's such a sense of excitement around them at the moment, but because, well, it's music that makes people happy, delivered with a loveable lack of pretension. Here they are playing one of my favourite songs from their debut album, 'Little Death'

Such is the buzz around The Beths that it looks like they're going to spend a fair bit of the next 12 months out of the country, so I'm glad I caught them now.

From there, my buddy and I headed for Whammy Backroom to catch Bene, who's a friend's daughter. She's 18 and only started playing gigs fairly recently. So how on earth does she have so many good songs? And how does her band have its shit together like that? I think you're going to be hearing a lot more of Bene, put it that way.

As Bene wound up, Collision had already kicked off down at the Samoa House fale, so we got there asap. Collision, as regular readers will know, were vaulted back into the spotlight by this year's Heed the Call compilation. But they hadn't played in New Zealand for 40 years: would there be enough people who knew who they were to form a crowd?

The answer is yes. I was pretty stunned to find the fale going off – and the band were clearly surprised and delighted too. They were great fun. And while I could have done without the Pacific reggae reversioning of some of the songs from their album (bandleader Hira Morgan still plays the songs in his own right and has clearly adapted them to current tastes), when they were funky they were damn funky. No more so than in the closing rendition of of Dalvanius's disco monster 'Voodoo Lady', for which they provided the original backing track.

From there, it was a few doors down to Anthology Lounge, where a smallish but lively crowd was moving to the fast-twitch beats of the Julien Dyne and Jonathan Crayford duo Two Farben. I had a dance and a sit down and I got this little video of Julien absolutely tearing it up on the drumkit.

We dallied so comfortably at the lounge that we were in danger of missing one of the sets I'd been most excited about – the Headless Chickens back together. But we rushed over the the road and got ourselves there in time. ("Getting there", of course, meant pushing our way through the crush at The Studio's eternal bloody bottleneck and into a good spot on the dancefloor.)

About now, dear reader, I reached the point at all such events where I put my phone away for everyone's good. Not only because things were getting irie – although they totally were – but because my friend Grant Fell's death has thrown my whole year out of shape and I still sometimes weep when I think about him. This gig was, as Chris Matthews announced from the stage, a tribute to him. It was the chance for everyone in the band to let it all out.

And they really did. You know, when a group has been playing a long time, slogging, aspiring to something, there are all kinds of things that can get in the way: everyone's hopes, insecurities and relationships. On Friday night it was as if all that had been wiped clean. It was time to rage at the dying of the light.

They started with 'Slice', they didn't play 'Cruise Control' and they finished with a version of 'George' in which Fiona McDonald pretty much cut loose ("shit, I've never seen her do that before," one of the band said to me later) and a thunderous 'Expecting to Fly'.

While my phone was safely in my pocket, a couple of other people captured parts of what went down. The audio on this clip of 'Mr Moon' doesn't quite capture how hulking and majestic it sounded out on the floor ...

But this Darkstation audio recording of 'Totalling Dad's Car' is bloody mint:

Note also that the Capture crew's excellent photographic roundup of the evening includes some lovely shots of the Chooks. Most notably, this one by Jackson, which ably captures the vibe of that performance of 'George': 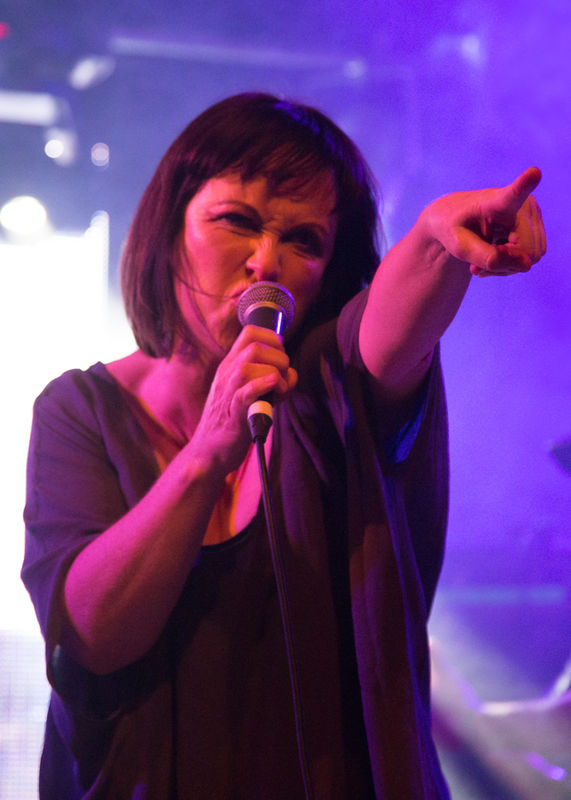 I was fairly emotional by the time they finished and needed a little while to chill, out the back on Galatos Street, before going back inside for Bailter Space. They were loud. Epically, unthinkably loud. My ears were comfortable enough with plugs in, but it started to feel a bit physically oppressive. We retired to the top, top bar at the back, where things sounded a lot better, but eventually cut out in pursuit of some youth.

That being The Goon Sax, the band of the son of Robert Forster out of the Go-Betweens, who were on late at the Wine Cellar. I'm so glad I caught them and their wiry, stripped-back indie rock. Would definitely Goon again.

Having long since acknowledged that we were having a large night out, my buddy and I headed back up the road, pausing only to greet a mildly startled Roger Shepherd, for a really sweet selection of house music from d.tyrone and K2K at Galatos Basement. That remix of 'Big Fun' made an old man very happy.

After a little disco-dance to J-NETT at Neck of the Woods, it was [redacted] in the morning and clearly time to go the fuck home. I made it safely back to Point Chevalier and I didn't even lose my reading glasses. Thank you so much to Matt Davis, Ben Howe and the rest of of the The Others Way team. See you next year, by which time I am confident I will have recovered from this year.

By some means, I made it back out on Saturday night to see the final show of Julia Deans' album tour at the Tuning Fork. The Fork, with its voluminous drapes, can lack a little for atmosphere – but with no walls to reflect off, the sound from the stage is generally lovely. And so it proved.

I hope Julia can keep working with the tour lineup – having both Reb Fountain and Tali present on backing vocals adds depth and colour to the songs. I gather my request for a guitar-shredding duel between Julia and Reb is under active consideration. 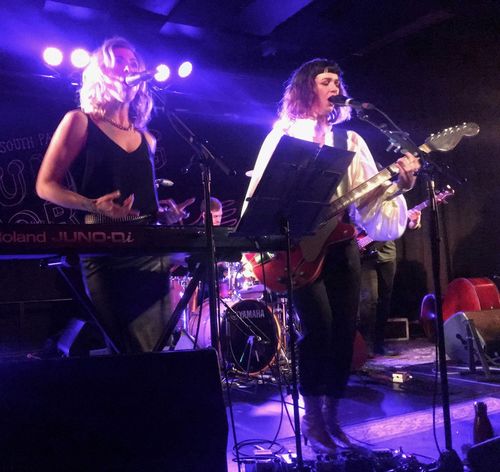 Addendum. I've mentioned both K2k and d.tyrone here before, and this week it occured to me that Kathryn (K2K) actually has a 95bFM show on Friday nights and perhaps there's more of that goodness there. Yup. Here's the show page – and the most recent podcast there is a two-hour back-to-back mix with d.tyrone, presumably undertaken as a warm-up for The Others Way the following Friday. It's great!

Also, Yadana Saw had a yarn with Julien Dyne about his most treasured tracks, for The RNZ Mixtape. Everything from krautrock to jazz.

Some video: the new BBC documentary Pump Up the Bhangra tells a familiar story of the way claiming and reshaping popular music lets young Britons define themselves. In this case, not simply as Asian, but British Asian. I really enjoyed this, and learned a lot.

And Michael Stipe on BBC Newsnight, being all thoughtful and likeable.

The New Zealand Music Foundation, at the impetus of Brent Eccles and Morgan Donoghue, is turning its eye towards the people in the music industry we often mistakenly think are indestructible. The Roadie for Roadies is a walk across the Auckland isthmus, from Onehunga to central Auckland. You can help out too.

Under the Radar has the lowdown on Orchestra of Spheres' new single, plus an exclusive stream.

And The Spinoff Music gets a remarkably strong lineup of 2018 Silver Scrolls finalists to talk about each others' tunes.

Just the one. A fine Fatneck take on an oldie that samples the even older 'Spank' by Jimmy "Bo" Horne (simple free download without any Hypeddit irritation):