Many years ago, I interviewed Martin Plaza of Mental As Anything about what the band had learned in the course of a long spell on touring bills in America. Go easy on the fast food, he said: "It turns to concrete in the stomach. And don't ever eat the crew's meal."

The Mentals had, to their cost, committed the latter sin after coming upon a spread not actually meant for them, backstage at some nameless midwest arena. They would not be doing so again.

I recall semi-officially tagging along on a Chills tour in Europe in the 1980s, the night they played a show in Belgium. The crowd was appreciative, but small. The promoters had clearly taken a loss -- but they still took the whole touring party (around a dozen of us) to a restaurant adjoining the venue. We were asked to choose between meat and fish but could hardly have expected what came: giant, juicy two-inch-high steaks and big fillets of fish swimming in creamy sauces. It was, as no one would actually say for decades hence, amazeballs.

The fare in Europe was, of course, less attractive for vegetarians, especially in Germany, where something presented as a vegetable soup would reliably contain large chunks of fleisch. But compared to touring in Britain? Luxury.

Food also has considerable symbolism in the context of a backstage rider. When David Bowie played Western Springs Stadium in 1983, it was a matter of note that his rider called for what was then still a relatively unusual food in Auckland: sushi. Believe it or not, this made him seem exotic and cosmopolitan.

Conceptual photograher Henry Hargeaves (the creator of Last Meals of Inmates on Death Row) recently made that symbolism manifest when he visualised the riders of the stars in a surprising, resonant series of images.

After they'd soundchecked and rehearsed a few tunes for last Wednesday's Orcon Great Blend in Wellingon, James (Lawrence Arabia) Milne and Samuel Flynn Scott headed out the door to eat. I pointed out that we'd put on some food for them at the venue, but Sam had somewhere to take James. I rather wish I'd asked.

Happily, ace food blogger Laura Vincent did ask. For her Hungry and Frozen blog, she put questions about food to every member of The Phoenix Foundation. It's really worth a read. I would also note that the band were in tremendous musical form at last night's Auckland show at The Powerstation. If they come to your town, go see them.

Meanwhile, I took this picture on Wednesday night before we relieved James of having to look into the projector beam: 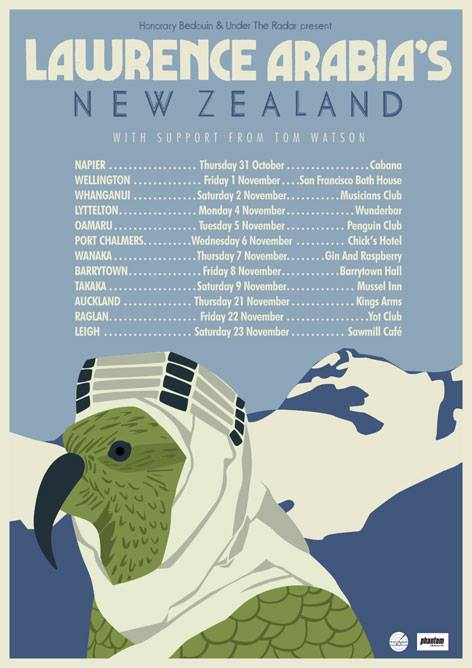 I enthused a while ago about Auckland producer The Basement Tapes's remix of Ladi 6's '98 Till Now'. I'm happy to say he's back with a fine take on Lorde's recent cover of The Replacements' 'Swingin' Party':

Dude, I have your next remix here. Julia Deans this week kindly dropped an out-take from her Modern Fables album, as a free download:

I would really like to hear The Basement Tapes remix of 'Teeth for Hands'. That's all I'm saying.

Street Chant's endlessly forthcoming second album is still forthcoming, but while we wait, they've slung out an EP of non-album new material, including this, a bangin' revamp of a cover they originally did for Kiwi FM during New Zealand Music Month:

You can download the whole Isthmus of One-Thousand Lovers EP here for free on Bandcamp.

And if you're crazy keen, you can order the EP on cassette (yes, really), along with this fine t-shirt (I trust mine will be in the post just as soon as the band get over their hangovers from last night's launch gig): 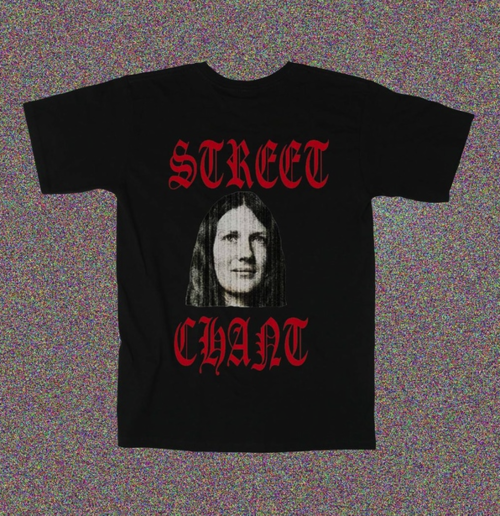 There's also a white tee and sweatshirt option. You can order them here on Bandcamp, until the strictly limited editions (20 of the sweats, 30 of the tees) sell out.

I unaacountably keep forgetting to link to this: David Herkt's wonderful profile of Allison Durbin for Audioculture. Many of the accompanying images are vintage magazine ads. So cool.

And unlikely but effective drum 'n' bass take on A Tribe Called Quest:

An extended, very funky remix of Bobby Byrd (which will be going off free download any time now):

A nice rethink of James Blake's 'Limit to Your Love':

And this quirky, 80s electropop-inspired local project via TheAudience: