The recent master-tape donation to the Alexander Turnbull library, momentous as it is, isn't the only Flying Nun heritage action going on at the moment.

At a secure location in Grey Lynn, former legendary Toy Love roadie (and Flying Nun Foundation board member) Ian Dalziel is going through the archives of Chris Knox. Chris continues to produce creative works at home (mostly visual art made with the left hand he trained himself to use after his stroke), but he and his family decided it was time to bring some order to the thousands of items he has stored over the years, incuding tapes, original art for sleeves, labels, posters and comics, photographs, correspondence, documentation and more. (Even Chris's Plunket book is there!)

It's not just Flying Nun. The archive includes the likes of the original label art for the Propeller Records sibling, Furtive, which released Tall Dwarfs' first EP, 3 Songs.

The tapes are particularly exciting. They include unreleased demo recordings made by Toy Love at Stebbing Studios, out-takes from various Knox and Tall Dwarfs albums and quite a few live recordings from the Rhumba Bar and other venues. The contents of some of the tapes won't be known until they can be examined by expert archivists.

Although much of the archive will very probably end up with an appropriate institution, it's quite possible that the project will spawn books, music releases and exhibitions. There are also multiple copies of some items, some of which may find their way out into the world, and work by other artists that may belong with them. But those are decisions for Chris and his family to make once the tallying is done.

I visited Ian while he was working for a look at what's emerging. Things like this tape of what was intended to be a Scavengers/The Enemy EP recorded at Mascot in 1978: 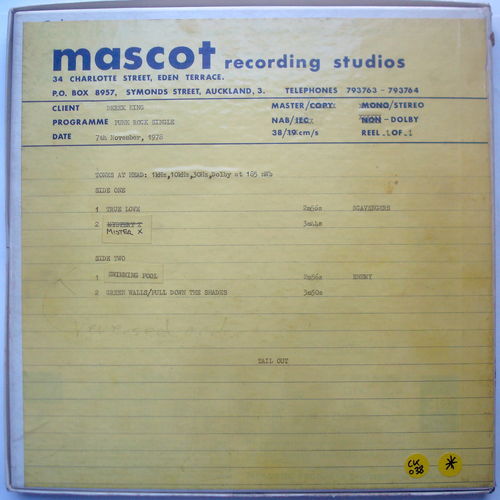 It was never released, and isn't likely to be, as The Enemy's drummer Mike Dooley explains:

We didn't much like the recording, which was funded by Radio Hauraki, hence the advert we did for them that they never used. The engineer and producer didn't like The Enemy and were uselessly inept in my view, but took a more favourable view of the Scavs. They also showed themselves as stuffy and shallow old hippies when Chris had an epileptic fit during a mixing session.

Cool. But now I want to hear that Hauraki ad!

Then there's this: the rough calendar for Chris and Doug Hood's epic trip south to record the Dunedin Double, Mainly Spaniards and a Tall Dwarfs record. They had the energy of (relative) youth ... 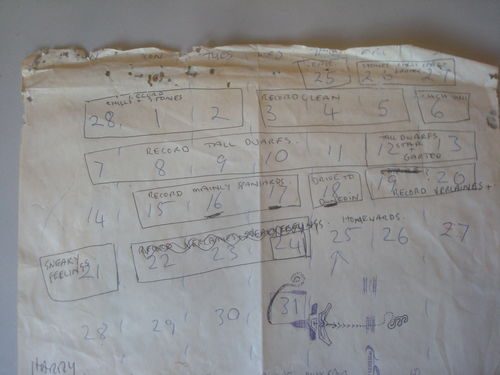 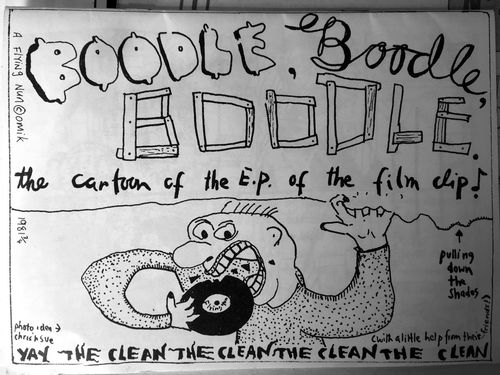 From 1983, a lively letter from the late Ron Kane: 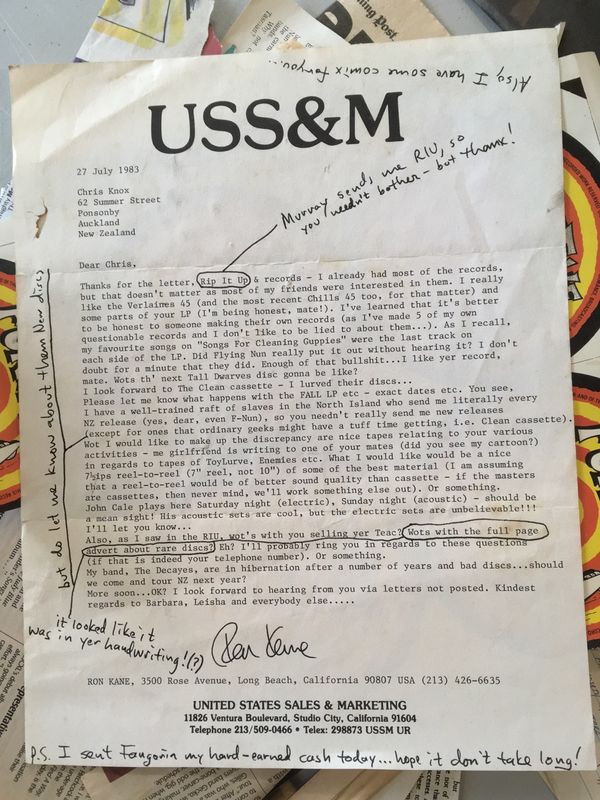 I got a little thrill seeing this. It's the illustration Chris provided for an episode of a short series of satirical histories I wrote for Rip It Up. It depicts legendary gonzo roadie Ziggy Carcrash (who, Chris correctly intuited, was based on the real-life Fred Kramer). 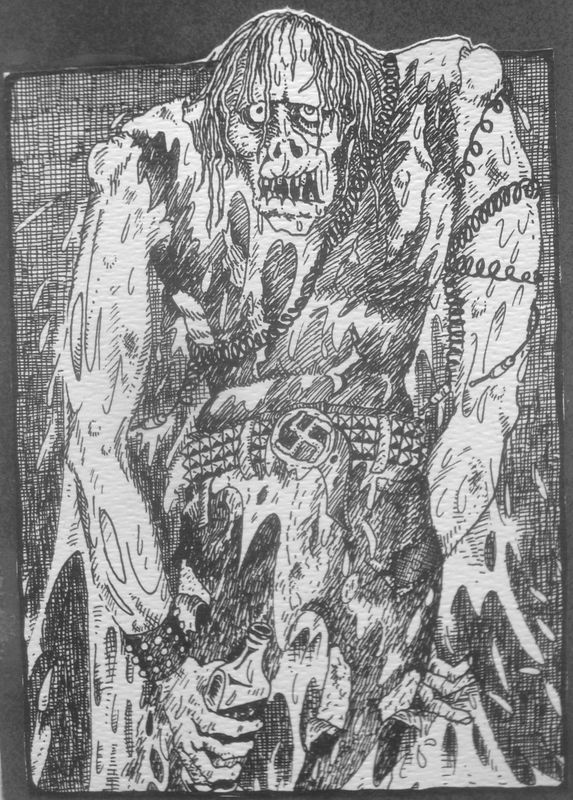 A miscellany of art by Chris, including posters and comics. And is that a never-used Flying Nun label design? 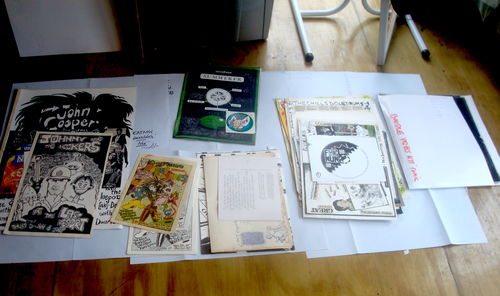 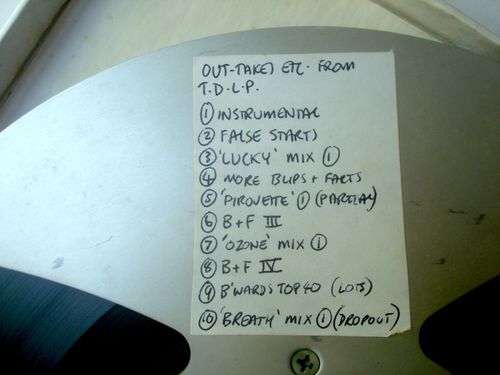 An undated recording of a Toy Love live show, with track notes by Chris. It doesn't seem to be the same recordings released on the Toy Love Live at the Gluepot album several years ago – they came in on cassette tape. 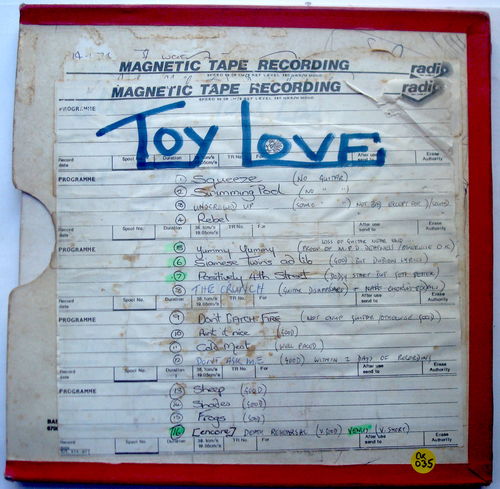 BOBZILLA! In 1982, residents of and visitors to a house in Jessel Street, Ponsonby (including Chris, the Kilgour brothers, Doug Hood, Barbara Ward and others) made a song about the house cat which was released as a Christmas single (XMAS 001). It's one of the stranger and rarer Flying Nun releases and goes for silly money among collectors. This is the master tape: 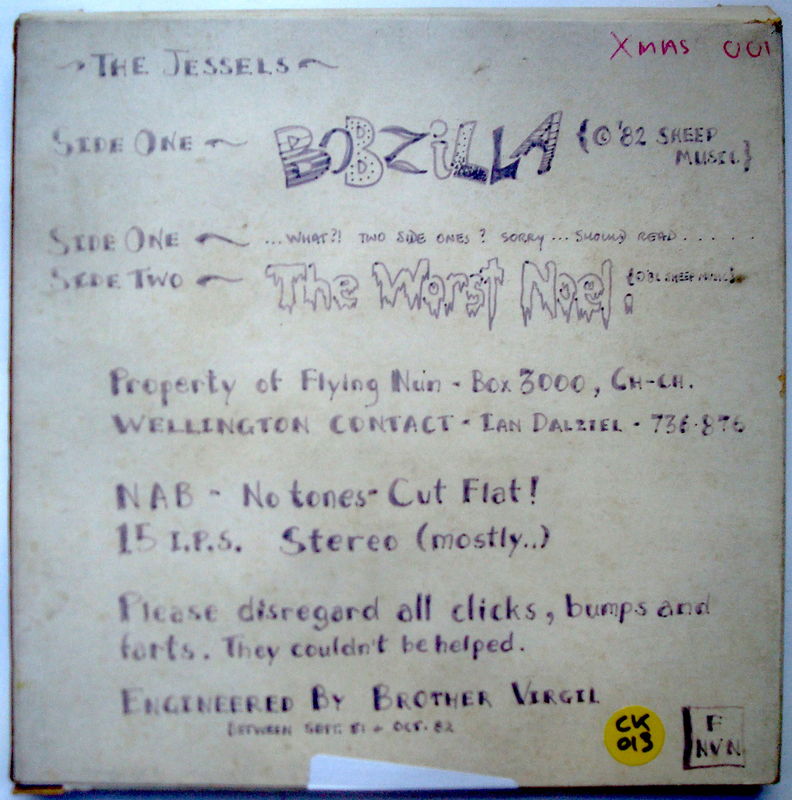 The contents of the sorting table on the day I visited. Note Chris's childhood musical notation book! 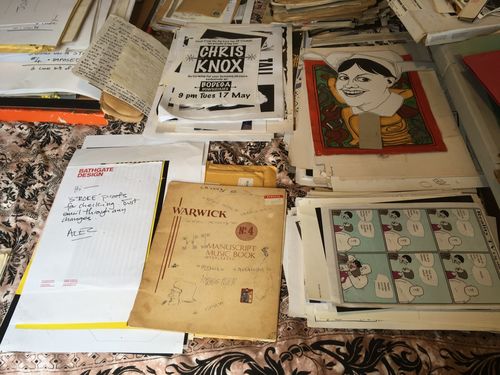 Ian at the sorting table ... 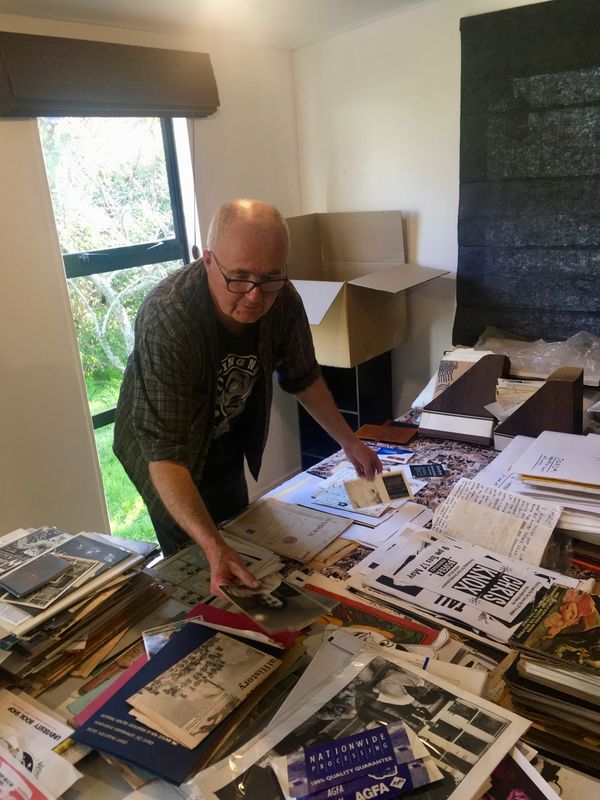 There are larger versions of these pics, and others, at the Flying Nun Foundation Facebook page (please like us when you visit – we're going to be posting interesting stuff on a more or less weekly basis and welcome your input) and you can also check out the FNF website.

This year's Proms season seems to be a particularly diverse and compelling one. Two or three times I've come in from a night out and just blissed out in front of the TV for a while. On Friday night, there was Sharon van Etten covering LCD Soundsystem's 'New, York I Love You But You're Bringing Me Down' at part of the New York Tribute evening. Oh my goodness ...

But there are other gems. Like all of Prom 13,  Pioneers of Sound, a tribute to the legacy of the BBC Radiophonic Workshop, featuring performances of electronic works by Daphne Oram and Delia Derbyshire:

The video on the BBC website isn't viewable from here unless you're using a VPN, but there are plenty of clips on the BBC Music YouTube channel – just click here and scroll down till you find what you want. Also, if you have a home theatre system, do yourself a favour and watch it on that.

Other new BBC bounty include 6 Music's All Day Rave, a tribute to the birth of modern dance music, which features A Brief History of the Second Summer of Love with Graeme Park of the Hacienda, a super-tasty live mix of 80s house classics by Marshall Jefferson and more. Including how a Pete 'n' Dud sketch turned into a club classic:

Meanwhile on RNZ, Avantdale Bowling Club came in to do NZ Live with Jesse Mulligan:

And not long after that, the charts came through. Their self-titled album is the top-selling New Zealand album and second only to Ariana Grande's new one in the overall chart. What you consider how hard it is to break through the wall of passive listening that dominates the charts in the streaming age, that's an extraordinary achievement for this kind of record.

It looked like The Others Way 2018 had sold out, but they seem to have found a few more tickets, which presumably will not last long. Here's the timetable (I'll post a bigger version in the comments below): 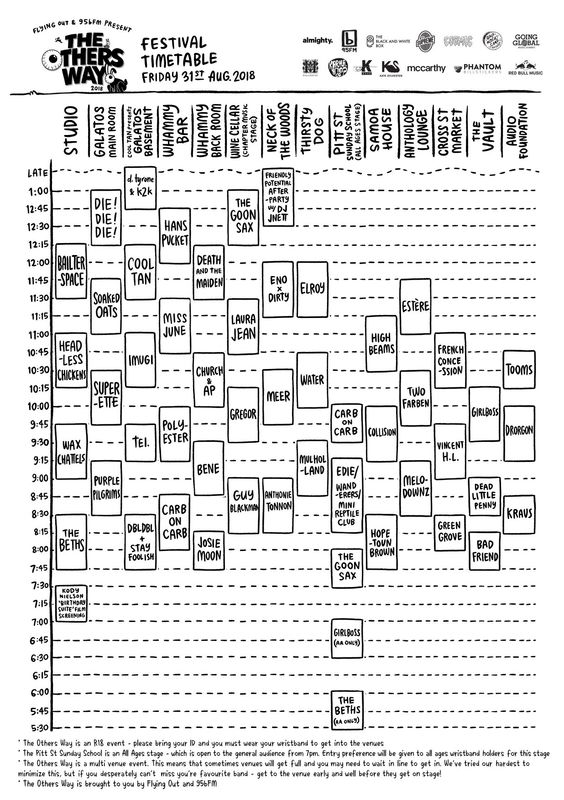 If you miss out, or it's all a bit daunting, don't forget that Julia Deans plays The Tuning Fork the following evening. Tickets for that and dates in Hamilton, Tauranga and Leigh can be had here from Under the Radar.

A while back, some friends of mine booked the rehearsal room in Bond Street (yes, the same place Boodle Boodle Boodle was made) to record some of the songs of their band, The Onedin Line. The plan was maybe to get a couple of tracks out on a 7" single, but it never quite came to pass. But Andrew Moore has put one of the songs earmarked for the single up on Soundcloud. It's a cracking tune:

The mighty Bill Brewster put together a two-hour episode of his podcast in tribute to Aretha Franklin, featuring a selection of her tunes – and those of the artists who sampled her (click through for download and track listing):

And finally, the Germans are back. The latest compilation is keeping with the Kompakt label's cool, minimal style, but there's quite a bit of variety amongst it. Streaming and download links here.