One of the real triumphs of the Outrageous Fortune prequel Westside has been the way its creators have curated and employed music to tell their story. Music was a part of the original series, but Westside's use of period tunes to evoke each year of its era took things up a level.

And I think series two is up a level again – perhaps because it moves into the era where its creators James Griffin and Rachel Lang have their own strongest musical memories, but also because 1981, the year in which the whole series is set, was an incredible year for New Zealand music.

Beat Rhythm Fashion's 'Beings Rest Finally' hung pensively over a post-adutery scene, The Clean's 'Tally Ho!' trumpeted the mad dash through the fences of Rugby Park in Hamilton and Herbs' 'Dragons and Demons' closed on a thicket of internal dramas. Not every song is from 1981, but those three were. They were harnessed not only to evoke the times but to communicate feeling – and they were each perfect.

I've been involved in several different projects that aim to amplify music's role in our wider culture. I could only aspire to doing it as well as James and Rachel have done here.

Here's heritage you haven't seen before! 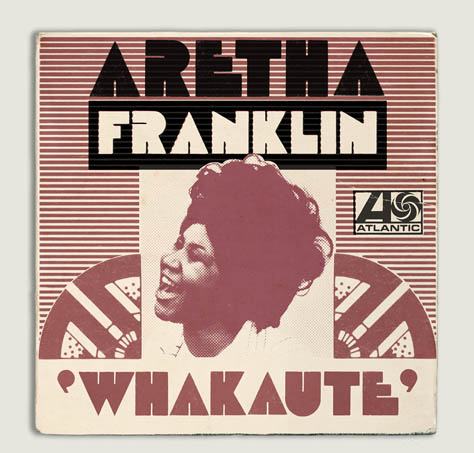 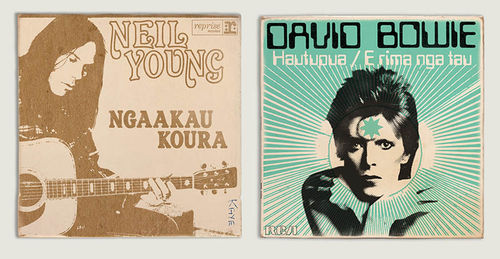 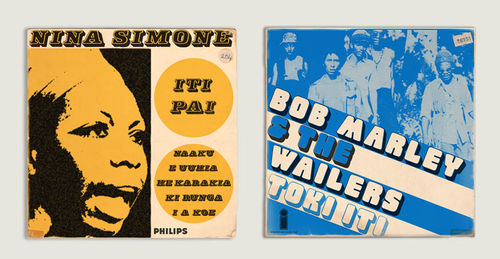 The press release that accompanied them says this:

Available for an all too brief moment between the early 1960s and the dawn of the 70s, Maori language pressings of international pop and rock are some of New Zealand’s most sought after vinyl treasures.

Sporting unique cover designs, and pressed up in ludicrously small editions, they now command serious money on the collectors market. Finding good condition copies is difficult – these records often partied hard – so as the popularity of Te Reo continues to grow it’s instructive to look back and appreciate these charming reminders of a more innocent time in New Zealand popular culture.

A selection of seven of these rare record covers are now available to buy as high quality A3 250gsm prints from Arcadia Bookshop, Newmarket.

In truth, these sleeves that never really existed – but don't you want them to exist? – are the creation of designer Chris Mousdale.

"They're completely contrived, designed from scratch," Chris explained to me. "I wanted them to look like they should exist. The old Letraset still works wonders! I had boxes of it from years ago – whole sets of fonts – and I can just never throw it out."

Ironically, the thing that took the most time was recreating the imperfection of old pre-press technologies – missed registrations and even cheap printing. Chris points out that many New Zealand releases were budget two-colour print jobs.

"You'll see that some 1960s LPs have blue type on the back, because they dropped black out of the process to save money."

Chris began the project after look for online resources for Te Wiki o Te Reo and finding most of them a bit dry.

"It's great hearing it on the radio, but on the stuff that's around us, printed labels and packaging, you don't see it. It's that sense that it would be lovely if this existed in a better world."

There's another reason to pop into Arcadia and buy one of these images: it will help with finding for Chris's big project: the forthcoming book of the graphic arts work of Chris Knox.

I used to have an old joke about how musicians are great but make terrible flatmates: they've never got any money and they smoke all your dope. But, in truth, committing to a life of music, even if only because there's nothing else you're fit for, can be really hard. There are multiple lifestyle risks and, especially if you're actually making the music, little money.

I think it's laudable, then, that the New Zeaand Music Foundation is aiming to get a picture of the music community via the new  New Zealand Music Community Wellbeing Survey, which seeks responses on a range of topics, from income to health, substance use and family relations.

According to the Foundation, the survey is "open to performers and producers, roadies and riggers, record company and label staffers, DJs and choir members, artist managers and promoters: in fact everyone who is making their way full time, part time or as a volunteer in music."

General manager Peter Dickens says the aim is to move beyond "a considerable amount of anecdotal evidence pointing to many challenges that exist for people working and volunteering in music. This study will help us further identify these challenges, gauge their seriousness and hopefully provide support that will help people to have a healthier, more productive and more fulfilling involvement in their chosen music field."

The confidential survey is open now, and will close at the end of July. I would recommend that anyone working and playing in the biz takes a few minutes to complete it.

My sources tell me that the rain and mud made Glastonbury festival harder work than usual this year – and of course, for many of those there, the Brexit result killed the party a bit. But the lineup, behind the very mainstream headliners, seemed rich from this side of the world.

The event, as ever, was magnificently covered by the BBC. If you want to full sets you'll have to ask the internet about that, but but the Beeb has plucked a single clip from many performances and while you might quibble with the choices (having watched a stream of Underworld's rousing set, I'd have gone for 'Cowgirl'), it's good to have them. So, it's 'Two Months Off' then:

And that song from LCD Soundsystem:

That song from Beck:

A little of what I'm told was a moving, mesmerising set from Sigur Ros:

And did I say there were no full sets available? Happily, a fan ripped UMO's set from iPlayer and posted it. It's still there, for now, and it's great. You know you're going well when the crowd starts singing 'Happy Birthday' to your soundman:

Feel free to post any other clips you fancy in the comments below. Just post in the URL of the video and it'll automagically embed when you save.

Just one this week – I'm still catching up from not having been able to write this post on Friday like I usually do. My favourite Aussies with another remix. Click through for a free download.